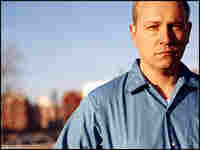 That is Chicago musician Sam Prekop. He's been a favorite of college radio deejays and other fans of catchy pop music for more than a decade. He's known as the leader of the band The Sea and Cake, but he's recently released his second solo album. It's called "Who's Your New Professor." That cut you heard a moment ago is from it. Here's John Brady with a review.

Mr. SAM PREKOP: (Singing) Do I believe I belong? I couldn't say for sure. Don't I? Obsession craves all my time.

`It's no wonder now. Can't I?' This is Sam Prekop distilled. Crooning in his signature breathy manner and with a softness that channels Curtis Mayfield, a singer he admires, Prekop sings obliquely about how hard it is to know yourself. Of the 12 songs on "Who's Your New Professor," many begin this way, with people who don't always understand themselves, and who certainly don't always understand each other.

In the mid-1990s, Prekop's band, the Sea and Cake, and another Chicago group, Tortoise, were at the forefront of a musical trend critics dubbed post-rock. Here's "The Argument" from the Sea and Cake's 1997 album "The Fawn."

(Soundbite of "The Argument")

BRADY: Post-rockers had roots in rock and pop to be sure, but they happily drew on other musical traditions such as jazz and experimental electronic music. They also willingly strayed outside of the boundaries of the usual three-minute verse-chorus-verse pop song format.

(Soundbite of "The Argument")

BRADY: The post-rock label rarely passes critics' lips these days, but the original desire not to be pigeonholed remains strong among Prekop and his compatriots. They want to be poppy; they want to be jazzy; they want soul; and they want to rock out all on the same record.

BRADY: Jazzy riffs like that punctuate Prekop's album. They come unexpectedly, little musical shocks for the listener. They add a rich layer of sound.

BRADY: On his new album, Prekop set out to craft sophisticated pop songs that are both thoughtful and entertaining. That's harder to do than to say. So much can go wrong. If the music is too intricate and the lyrics too clever, then the whole thing just smacks of posing, and that's no fun. But if a musician just spins pop like cotton candy, the songs melt away. They become distant memories even before they're over. Prekop keeps his balance on this particular tightrope, though. He has a deft ear for a catchy melody, and his guitar playing is lively and sweet.

Mr. PREKOP: (Singing) Will I still get over with shock ...(unintelligible) dash every hope left down?

BRADY: His new album, "Who's Your New Professor," is easy to get into. It's as if Prekop heard the music start, stepped up to the mike and began in his breezy, nonchalant way to sing about what's been on his mind. Often what's on his mind is uncertainty.

Mr. PREKOP: (Singing) Still, I wonder whether I'll be understanding always, but you're bound to let me know.

BRADY: Sam Prekop's willingness to wonder out loud about what he doesn't know is refreshing, especially at a time when political figures seem ever quicker to draw hard and fast lines, and all the better that Prekop sets his doubts to a cool, serene soundtrack.

CHADWICK: John Brady lives in Santa Monica and writes about pop culture. The album is "Who's Your New Professor" from Sam Prekop.

Mr. PREKOP: (Singing) You fell in my hands without knowing it. I had to try and ...(unintelligible) do you want. Will you stay? As soon as I am able...

CHADWICK: DAY TO DAY is a production of NPR News and slate.com. I'm Alex Chadwick, away on assignment tomorrow, but Madeleine will be here. Listen in.