Accessibility links
Moby Checks in with 'Hotel' Hotel is the new CD by the electronic musician Moby. Moby's 1999 CD Play mixed old blues and gospel music with modern electronica. Music critic Mikel Jollett feels a bit nostalgic for the old days of the 90's after hearing the new Moby CD. He says it doesn't have the spark of his older work.

Listen
Moby Checks in with 'Hotel'

Hotel is the new CD by the electronic musician Moby. Moby's 1999 CD Play mixed old blues and gospel music with modern electronica. Music critic Mikel Jollett feels a bit nostalgic for the old days of the 90's after hearing the new Moby CD. He says it doesn't have the spark of his older work. 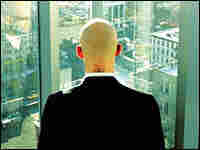 You don't have to go far to hear the music of Moby. His electronic collages of old blues, gospel and R&B have been used in countless commercials and on movie soundtracks. Moby's latest release features two CDs; one is a collection of lyrical songs, the other is a wordless CD of ambient tracks. Music critic Mikel Jollett has these thoughts on the record called "Hotel."

It's something of an odd phenomenon in this age of retro music nostalgic for sounds from the '60s, '70s and '80s. So it presents the question: Have we already grown nostalgic for the '90s, lo those six years ago? I mean, in addition to its "I Love the '80s" program, VH1 has already begun running a show entitled "I Love the '90s," in which clips of Bill Clinton and Pearl Jam are interspersed with B-list celebrities discussing flannel shirts and beanies.

Are we next to be subjected to "Those Crazy Oughts,"(ph) in which Paris Hilton and Ken Jennings discuss Scott Peterson, the Michael Jackson trial and any other pop cultural event that happened last week? Is there something disconcerting about living in an age in which nostalgia for the past so dominates the present that we can almost feel nostalgic about our culture as it happens? What will this jacket look like to me 10 years from now? Why, in God's name, did I get this haircut?

Is this self-consciousness this creates simply a form of detachment, and if so, why do we need to feel so detached? It's a different world now, and listening to an artist whose heyday was only six years ago makes that abundantly clear.

JOLLETT: Both of the new Moby records, the ambient one and the one with all the songs on it, use almost no recognizable samples. This may have been a choice he made in order to pursue a new direction, but it's too bad because it doesn't really work. Back then he was a different kind of composer, like Beck, a person who rummaged through the trash bin of pop culture and used what he found to create something new and relevant. The new records are not particularly relevant, though they do highlight Moby's considerable talent as a producer. This is especially true on his ambient record. It sounds something like a soundtrack to a drive through a summer rainstorm. This is called "Chord Sounds."

JOLLETT: The beauty of the ambient record aside, it's on the other CD, the one where he sings, that Moby takes a wrong turn. It's filled with musings on failed relationships and exceedingly personal moments of reflection on past lovers. And it's not that the CD doesn't mind time-honored themes in pop music. It's that this time around Moby's all thumbs with them.

JOLLETT: To listen to this record is like walking through the mall on a Saturday and seeing one of those photo studios with a huge airbrushed black-and-white picture in the display of a naked pregnant woman in profile with a man pressed to her side. You know, their faces are all serene, and the photo is supposed to capture something about the miracle of life or the intimacy of marriage or something. But then you're just standing there with, like, a Slushie and a birthday card next to the Panda Express. So rather than capturing the miracle of life, it captures the discomfort of voyeurism.

MOBY: (Singing) Thought I fell in love the other day with an old friend of mine. I was running kisses down every inch of her spine. We had the roof down. The sun came shining in. The black fact is that I was thinking of you. If I could kiss you now...

JOLLETT: In fairness, it's not as if Moby is all washed up and destined for obscurity. He just made his weakest record is all. Heck, it's actually quite difficult to write a good love song because, yeah, love is wonderful. So what? I think it's more about how you capture it. And Moby did that best in his 1999 masterpiece "Play," a record filled with wistful longing, playful sampling and--What else?--nostalgia for the past.

NORRIS: The release is called "Hotel." It's by Moby. Our music critic is Mikel Jollett.