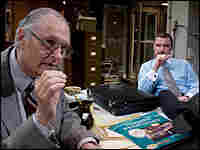 On Sunday, actor Liev Schreiber will be competing for a Tony Award for his role in the latest Broadway production of David Mamet's Pulitzer Prize-winning play, Glengarry Glen Ross. He has familiar company among his fellow nominees: co-stars Alan Alda and Gordon Clapp are nominated in the same category, best performance by a featured actor.

Schreiber plays Roma, the top man in a louche real-estate sales office. The 37-year-old actor, known for his roles in movies such as Scream and RKO 281, talks with Scott Simon about the play and his work.