Accessibility links
Les Paul, Still Strumming on the Cusp of 90 Guitar legend Les Paul is about to turn 90 and still going strong. He plays weekly at New York's Iridium Jazz Club, and he has a string of new albums coming out. Tom Vitale visits with Paul in New York.

Listen
Les Paul, Still Strumming on the Cusp of 90 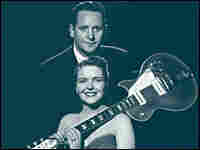 Paul says he and wife Mary Ford foundered when she wanted to quit working. "I said, I can't give up my life," Paul says. "My life is my work. I've got to work." Courtesy of Capitol Archives hide caption

Songs from the Les Paul Trio

More than half a century ago, Les Paul pushed a simple string instrument beyond its traditional acoustic limits. The Gibson electric guitar named for him helped usher in the age of rock music, from Hendrix to heavy metal. 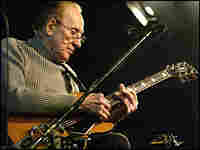 But Les Paul was never a rock guitarist, until now. He will turn 90 on June 9, and in August he's planning to release five new albums, including his first-ever venture into rock.

Paul, born in Wisconsin, started by playing live jazz and country for the radio before moving on to work with Bing Crosby and the Andrews Sisters.

He remembers Crosby as a mentor who influenced his career. "In recording and working together," Paul says, "it would naturally rub off on me as to what he did... That was to be a great teacher for me."

Paul and wife Mary Ford had several hits in the '50s and eventually became the stars of a radio and TV show that ran for seven years, Les Paul and Mary Ford at Home. The couple later divorced, and Paul did not perform for a decade. (Mary Ford died in 1977.) Paul returned to public life in the '70s, recording the Grammy-winning album Chester and Lester with Chet Atkins.

Tom Vitale catches up with Paul, who struggles with arthritis and an old arm injury, but continues to perform, playing weekly at New York's Iridium Jazz Club as he has for 21 years.

Present at the Creation: The Electric Guitar