Accessibility links
Ron Howard on 'Cinderella Man' Director Ron Howard discusses his latest film, Cinderella Man, a rags-to-riches true story of boxer James Braddock, whose improbable rise during the Great Depression embodied the hopes of the suffering. Howard says that what makes the movie intriguing is the combination of the protagonist's actions both in life and sport.

Director Ron Howard discusses his latest film, Cinderella Man, a rags-to-riches true story of boxer James Braddock, whose improbable rise during the Great Depression embodied the hopes of the suffering. Howard says that what makes the movie intriguing is the combination of the protagonist's actions both in life and sport. 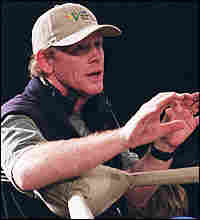 Ron Howard on the set of the film. Universal Pictures hide caption

This is MORNING EDITION from NPR News. I'm Steve Inskeep with Renee Montagne.

For all of its brutality, the blood sport of boxing once offered a fairy-tale ending. It was 1935. A broken-down boxer by the name of James Braddock walked into the ring and took on the brutal champion, Max Baer. Sportswriters said this fight was a mismatch and even predicted that Max Baer would kill his opponent. Instead, in a 15-round thriller, the fighter dubbed `Cinderella Man' became the heavyweight champion of the world. And for many Americans suffering through the Great Depression, Jim Braddock's improbable rise embodied all their hopes. The movie "Cinderella Man" opens today starring Russell Crowe. And Renee spoke with the director, Ron Howard.

Mr. RON HOWARD (Director, "Cinderella Man"): I got the feeliing in all of our research that Braddock never really loved boxing as a sport. I don't think it really defined him as a person. I think it was a thing that he discovered he could do better than other people when he was about 15 or 16 years old. He had never been interested in school. He was already out of school by then and working really as a laborer and an errand boy and things like that. But he found he could beat people in the ring and make money at it. He really had no alternative, he felt.

Mr. CROWE: (As Jim Braddock) I can still fight.

Unidentified Man: Go home to Mae and the kids, Jim.

Mr. HOWARD: He had also been battered and bruised and really severely injured and he kept fighting hurt and, at a certain point, they took away his boxing license. I think in a way they did him a favor in retrospect because he healed during that time. And when he did make this unlikely comeback, people were shocked, but they hadn't really seen a healthy Braddock in years. And he just--he went on an incredible winning streak. He himself, when asked, `Why do you think you're winning again, Jim? It seems to kind of come out of nowhere.' And we used this line in the film, but he said, `I know what I'm fighting for now.' And they said, `What's that?' `Milk.' And he said he was just tired of seeing the empty milk bottles on the stoop.

Had he fallen that low? Was he living in a slum apartment with--you know, at any given moment they wouldn't have enough to eat and children might be taken away because they couldn't, you know, afford to feed them?

Mr. HOWARD: Yeah. And there are no photographs of that period of their lives that we could find, but there were some letters that--actually the actress who plays a neighbor woman, Sara, is Rosemarie DeWitt. and She is Mae and Jim Braddock's granddaughter. She gave us some letters which were incredibly poignant and moving which described some of that, mostly gave us a real sense of the disappointment that Braddock felt at not being able to take care of his family.

Mr. CROWE: (As Jim Braddock) Things ain't easy at the moment, Joe, you're right. There's a lot of people worse off than what we are. I guess good things ain't easy. That don't give you the excuse to take what's not yours, does it? That's stealing, right? We don't steal. No matter what happens, we don't steal. Not ever. You got me?

Mr. HOWARD: You know, they were on the soup lines and he was working as a laborer and there was a moment when he thought he wasn't going to be able to keep the family together and he despaired and he was humiliated by it, but he was able to fight his way out.

MONTAGNE: Well, you know, one thing that was noticeable was that Russell Crowe, who plays Jim Braddock, is actually quite small and slender in this movie even for him. I mean, he's not as bulked up as he was in "Gladiator."

Mr. HOWARD: Oh, no. He slimmed down because Braddock always was a natural light heavyweight who was fighting up when he moved to the heavyweight division.

Unidentified Announcer: Braddock sinks with a left, another left. (Unintelligible) it's a close match, folks.

Unidentified Announcer: And there's the bell. James J. Braddock has exhibited a lot of pluck here; over 11 grueling rounds with the champion.

Mr. HOWARD: Russell had brought the project to me not so long after we had finished "A Beautiful Mind." And I knew about Braddock. I knew about his story a little bit, because my father, you know, raised in Oklahoma during the Depression, had been a lifelong fight fan and the first fight that had been deemed important enough for his father to load, you know, his then five- or six-year-old son into the truck and drive to the pool hall, 'cause they didn't have a radio themselves to listen to the fight, was "Cinderella Man" Jim Braddock fighting Max Baer for the heavyweight championship of the world. So my dad had vivid memories of the fight and he always held Braddock up as a kind of a shining example of, you know, strong character carrying the day.

MONTAGNE: Now your dad was an actor as...

Mr. HOWARD: Rance Howard, yes. And he still acts a great deal. But, yeah, my dad left the farm and decided he wanted to be a singing cowboy, even though he couldn't carry a tune, but I guess he didn't know that or it didn't bother him. So he never became Roy Rogers but he made a good career and continues to all his life working in films, first in New York and then Los Angeles.

MONTAGNE: And that, though, is, in a sense, the way you got into acting, which I gather you got into when you were practically a babe in your mother's arm.

Mr. HOWARD: Well, I actually was carried on by my mother into a scene, kind of a grade B or C Western that my dad was doing, and when I was, I think, 18 months old and they needed a baby to cry in a scene and so they gave me a little toy tomahawk or something and left it in my hand long enough for me to become attached to it and then they rolled cameras and took it away. And they got the crying that they wanted that way.

MONTAGNE: (Laughs) Is that like against the law now?

Mr. HOWARD: No. I don't think it's against the law. (Laughs)

MONTAGNE: Ron Howard, thank you very much for joining us.

Mr. HOWARD: Nice talking to you.