Accessibility links
Barenaked Ladies Meet Shakespeare Shakespeare was not only a poet and a playwright but a songwriter as well. The famous bard wrote songs for most of his comedies. But fortunately for the Barenaked Ladies, only the lyrics survived. Celeste Headlee of Detroit Public Radio reports.

Shakespeare was not only a poet and a playwright but a songwriter as well. The famous bard wrote songs for most of his comedies. But fortunately for the Barenaked Ladies, only the lyrics survived. Celeste Headlee of Detroit Public Radio reports. 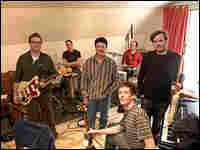 When you ask which musicians have written music for a Shakespearean play, you get a pretty diverse list. Duke Ellington is on it; so is Felix Mendelssohn and Ray Vaughn Williams. And now the Canadian pop band Barenaked Ladies can be added. Celeste Headly of Detroit Public Radio reports.

Shakespeare wrote songs for most of his comedies, but only the lyrics have survived. So composers have been setting these songs to music for centuries. One text from "As You Like It" has tempted hundreds of different composers. Thomas Morley added a tune to "It Was a Lover and His Lass" not long after the play was written.

Unidentified Man: (Singing, as Page 2) It was a lover and his lass, with a hey, and a ho, and a hey nonino, with a hey, nonino-ni-no.

Mr. GERALD FINZI: (Singing, as Page 2) That o'er the green cornfield did pass, in springtime, the only pretty ring time.

HEADLY: And Matthew Harris set the same text to music not long ago.

Male Chorus: (Singing) It was a lover and his lass, that o'er the green cornfield did pass.

Female Chorus: (Singing) In springtime, the only pretty ring time.

HEADLY: All of those songs sound very different, but not quite as different as this version.

BARENAKED LADIES: (Singing) And therefore take the present time, with a hey, and a ho, and a hey nonino.

HEADLY: That's the Canadian pop group the Barenaked Ladies. The production of "As You Like It" that opens at the Stratford Festival in Ontario tomorrow night features incidental music by the Grammy-nominated band. The Stratford is the largest repertory theater in North America and one of the most successful. This summer, the company will produce about 15 shows, mainly Shakespeare. Stratford officials say they expect to sell about 600,000 tickets for the season. Some might say pairing a pop band with the Stratford is a marketing gimmick. But Stephen Lias worked as the resident composer for the Texas Shakespeare Festival for years, and he says that's a moot point.

Mr. STEPHEN LIAS (Texas Shakespeare Festival): If you're going to do a gimmick getting an audience that appreciates a certain popular group's style to come to see Shakespeare, I think it's a clever idea, even if it is a gimmick.

HEADLY: Antoni Cimolino is directing "As You Like It." He says it'll be great if the Barenaked Ladies bring more young people to the festival. But that's not why he chose them.

Mr. ANTONI CIMOLINO (Director, "As You Like It"): This is a play that Shakespeare's written about young people falling in love and about the importance of love and about getting away from the corruption and the envy of the world that their parents have created. I wanted to do something where it was set in a time where that youthful sense of rebellion and the importance of love was at its height. And so I thought about the period in the late '60s.

HEADLY: Cimolino says he went looking for a rock band that could handle Shakespeare's text intelligently and create a sound that was reminiscent of the 1960s but not derivative. Someone suggested the Barenaked Ladies, and Cimolino thought it was a perfect idea. He says the group's songs are tuneful and their music is basically word-based. Richard Rischar teaches music at Dickinson College in Pennsylvania. He agrees the Barenaked Ladies seem to be a natural fit with Shakespeare. [POST-BROADCAST CORRECTION: The professor cited is Bill Kincaid, head of acting at Western Illinois University, not Richard Rischar.]

Professor BILL KINCAID (Head of Acting, Western Illinois University): They're playful with language. They're very aware of language and how it functions and its potential to amuse, its potential to set up expectation and to create surprises. These are all things that they have in common with Shakespeare.

BARENAKED LADIES: (Singing) Like the dream you try to remember but it's gone, then you try to scream but it only comes out as a yawn, when you try to see the world beyond your front door.

HEADLY: Barenaked Ladies' Steven Page says he jumped at the chance to write the music for "As You Like It" because he's always loved the theater. Still, he says he was a little intimidated by the material. How could he possibly get all of these `hey, noni-nonis' into a rock song?

Mr. STEVEN PAGE (Barenaked Ladies): And I thought, how am I going to fit iambic pentameter into a rock 'n' roll format? But it wasn't as hard as I thought it was going to be. I think when you're presented with lyrics that are kind of water tight, it ended up flowing very nicely with the way I write music.

BARENAKED LADIES: (Singing) Come, sweet Audrey, we must be married or we must live in bawdry. Farewell, good Master Oliver; not `O sweet Oliver, O brave Oliver, leave me not behind thee.' `Wind away, be gone, I say. I will not to wedding with thee.'

HEADLY: Most of the songs will be sung in performance by Dan Chameroy, a Canadian actor playing Amiens. Chameroy says he knows there are people who'll be upset by the pairing of the greatest dramatist in the English language with a pop band.

Mr. DAN CHAMEROY (Actor): We're still using Shakespeare's words. We're still respecting what he created. We're just adding a little contemporary spin on it, you know. And I don't think it's a bad thing at all.

HEADLY: And Richard Rischar says it's not quite as anachronistic as it may seem. Since the day Shakespeare died, people have been adapting his work to their own time by writing incidental music for the plays.

Mr. RISCHAR: Shakespeare predates Bach. Most of the tunes that we know and most of the styles of music that we know came after Shakespeare. So, really, to dismiss a contemporary pop music sound on those grounds would also be to dismiss the use of, say, Mozart or Beethoven.

HEADLY: For Steven Page, writing this music was an opportunity to do something completely different. Page says he welcomed the break from the pop music industry.

Mr. PAGE: I enjoyed feeling like a collaborator--I mean, actually being a collaborator in this situation, where the endeavor was purely artistic--which is largely what Barenaked Ladies' intentions are, but it's so caught up for us in the world of the music business. I didn't have to engage in the business side of the Stratford Festival at all.

HEADLY: Page set six songs for "As You Like It" and composed about 20 minutes of cues. That's the music you hear during scene changes which serves as a transition from one mood to another or one location to another. During the performances, there'll be a musician onstage with an acoustic guitar singing and playing along with pre-recorded tracks made by the Barenaked Ladies. "As You Like it" opens tomorrow night at the Stratford Festival in Ontario, Canada. The show runs through October 30th.

INSKEEP: From NPR News, this is MORNING EDITION.