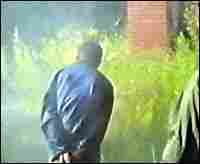 A still image from a video said to show Serbian paramilitary forces executing Bosnian Muslims in Srebrenica, in July of 1995. Reuters hide caption 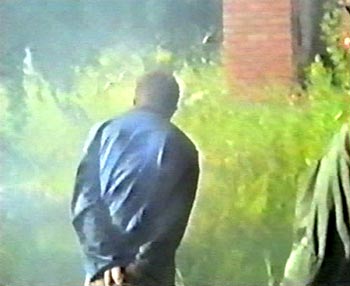 A still image from a video said to show Serbian paramilitary forces executing Bosnian Muslims in Srebrenica, in July of 1995.

In Serbia, there's both shock and denial after the broadcast of graphic video footage that shows Serbian paramilitary forces executing Bosnian Muslims. The video shows one massacre that was part of the systematic killing of 8,000 Bosnian men and boys in Srebrenica in July of 1995. It was the worst atrocity in Europe since World War II. In the video, a Serbian Orthodox priest is seen blessing members of the Scorpions unit.

BLOCK: `In the name of all our saints,' the priest says, `give strength to the most faithful Serbian army to fight and to win against the enemy of the Serbian people.'

BLOCK: Later, the soldiers are seen lining up six young emaciated Muslim men. Their hands are tied behind them. They're shot in the back with machine guns.

BLOCK: The tape was originally shown at the UN War Crimes Tribunal in The Hague, then it was broadcast on Serbian television. Dejan Anastasijevic is with the news weekly Vreme in the Serbian capital, Belgrade. He explains it's not just the brutality of the executions that's so shocking. It's also who's seen carrying them out.

Mr. DEJAN ANASTASIJEVIC (Vreme): This specific paramilitary unit is not a Bosnian Serb unit. It is a unit which comes from Serbia. And the people from the unit, were actually members of the Serbian police force. So this is the first hard evidence that Serbian troops from Serbia were involved in the Srebrenica massacre. So far, Serbian authorities were always claiming that troops from Serbia were not involved in the Bosnian War, just Bosnian Serb units.

BLOCK: There also, though, seems to be a far deeper level of denial, not just about Serbian involvement but about what happened in Srebrenica. There's been a poll recently before this videotape that showed that 50 percent of Serbs didn't believe that any massacre took place. How do you account for that?

Mr. ANASTASIJEVIC: Well, to tell you the truth, I am not surprised with this because it is always unpleasant, not just in Serbia, but for any country to commit--that horrible crimes were committed in their name. It's really unpleasant and people essentially--their first reaction is always to refuse to believe it. It was very, very similar in Germany after the World War. It took a whole generation of Germans to grow up in prosperity and democracy, to start really facing the facts of the Second World War. So this war was relatively recent. We still don't have the new generation in Serbia, and we're still building democracy, and we're not very prosperous. So I am not surprised that people essentially refuse to believe in the awful truth.

BLOCK: What sort of reaction has there been inside Serbia now that this video has been shown?

Mr. ANASTASIJEVIC: Well, the first immediate reaction was very concrete. Ten people, members of the Scorpions, were arrested by the Serbian authorities. And they will be put on trial before the special courts for war crimes, which has been established couple of years ago. So that was the immediate move of the authorities. The second reaction came from Serbian President Boris Tadic, who very clearly condemned the war crimes in Srebrenica and also promised to attend the 10th-year anniversary of the massacre, which will be held in Srebrenica in a month's time. And a third reaction came from the president of the Federation of Serbia-Montenegro, Svetozar Marovic, who promised that General Mladic will be arrested before the anniversary of Srebrenica. Presumably General Mladic, who was the chief commander of the Bosnian Serbs during the war and indicted by the War Crimes Tribunal, is still hiding somewhere on the Serbian soil.

BLOCK: Among those disbelievers and deniers, those who doubt anything happened in Srebrenica, would you expect that this videotape showing this execution would change their minds?

Mr. ANASTASIJEVIC: I think there will always be a number of people who will deny that any crime was committed. There's also a group--not a very small group--of people who, because of their political interests or direct involvement in these crimes, is to deny it all no matter what evidence is presented. However, I think that the average Serbian Joe will probably think twice after seeing this before saying that no crimes were committed in Srebrenica or that it wasn't a really big deal.

BLOCK: Mr. Anastasijevic, thanks very much for talking with us.

BLOCK: Dejan Anastasijevic is a senior journalist with the news weekly Vreme in Belgrade, Serbia.