Accessibility links
Killing the Golden Spruce The Golden Spruce: A True Story of Myth, Madness, and Greed tells the story of a sacred tree, a logger-turned environmentalist and a shocking act of environmental protest in the woods of British Columbia. Michele Norris talks with author John Vaillant. 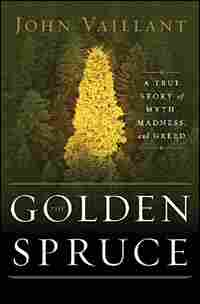 The Golden Spruce: A True Story of Myth, Madness, and Greed tells the story of a sacred tree, a logger-turned environmentalist and a shocking act of environmental protest in the woods of British Columbia. Michele Norris talks with author John Vaillant.

Of all the West Coast conifers, the Sitka spruce seems the most naturally suited to the maritime environment. Its long, narrow geographic distribution mirrors that of the Pacific rainforest, and the species shows a preference for planting itself in the teeth of the gale. Sitka spruce have a high tolerance for salt spray and they often serve as the first line of defense between the sea and the forest; their great size and strength breaks storm-driven winds that can lay waste to lesser species. Sitka spruce is the world’s largest and longest-lived species of spruce; it can live for more than 800 years and grow to heights exceeding 300 feet, which is tall even for a redwood. Despite the colossal end result, their beginnings are almost unimaginably humble: a single Sitka spruce seed weighs only 1/13,000 of an ounce, and yet it contains all the information needed to produce a tree that can weigh more than 300 tons -- about as much as three blue whales. While the species is common up and down the coast, these "mega spruce" grow in only a handful of places, and one of them is the Yakoun Valley.

During one autumn around 1700, on the west bank of the Yakoun River, a random Sitka spruce cone opened and let a seed like no other drift to earth. It was one among hundreds of seeds that fell that year from one among thousands of cones produced by one among the tens of millions of Sitka spruce trees growing on the Northwest Coast. Its parent tree may well have been scattering seeds since the time of the Vikings. Were it not for the fact that an individual spruce seed’s chances of survival are comparable to those of a human sperm, every parent tree would be a forest unto itself. As it is, despite as much as 750 years of fertility, a typical Sitka spruce may produce only a dozen offspring that survive to maturity. That the seed in question would be one of them mystifies people to this day.

Shaped like a teardrop and about the size of a grain of sand, the seed would have appeared identical to all the others that had been peppering the forest floor for millennia. Of its cone mates that landed on the heavy moss carpeting much of the forest, only one in a hundred would germinate. Those lucky enough to land on a nurse log would fare better, but even then the chances were one in three that they would be killed by fungi within the month. Somehow this anonymous seed with its strange message beat these abysmal odds and managed to take root. The tiny sprig would have been easy to miss in the crowded nursery of the forest floor, surrounded as it was by thousands of other aspiring trees -- not just Sitka spruce but hemlock, redcedar, yellow-cedar, and the occasional yew. At this stage, it would have been dwarfed by everyone, even habitual shadow dwellers like little hands liverwort, lover’s moss, black lily, sword fern, and devil’s club, not to mention the dense thickets of salal that can grow a dozen feet high and require a machete to penetrate.

To look at this seedling -- if one could see it at all -- and believe that it had every intention of growing into one of the towering columns that blot out so much of the northwestern sky, would have seemed far-fetched at best. In its first year, the infant tree would have been about two inches tall and sporting a half dozen or so pale green needles. It would have been appealing in the same abstract way that baby snapping turtles are, its alien appearance transcended by the universal indicators of wild babyhood: utter helplessness and primordial determination in equal measure. Despite its bristling ruff and a stem as straight as a sunbeam, the seedling was still as vulnerable as a frog’s egg; a falling branch, the footstep of a human or an animal -- any number of random occurrences -- could have finished it there and then. Down there in the damp darkness of the understory, the sapling’s wonderful flaw was a well-kept secret. With each passing year, it dug its roots deeper into the riverbank, strengthening its grip on life and on the land. In spite of the odds, it became one of a handful of young trees that would survive to shoulder their way into the sunlight, competing with giants a dozen feet wide and hundreds of feet tall. In the end, it would be the sun that exposed this tree’s secret for all to see, and by the middle of the 1700s it would have been abundantly clear that something extraordinary was growing on the banks of the Yakoun. It was a creature that seemed more at home in a myth or a fairy tale: a spruce tree with golden needles.

Unless a tree is particularly large, or unusually shaped, it will not stand out as an individual, and unless it is isolated from its mates, it will seldom announce itself from a distance. But despite being embedded in a forest of similarly large trees, the tree that came to be known as the golden spruce was an exception on both counts. From the ground, its startling color stopped people dead in their tracks; from the air, it stood out like a beacon and was visible from miles away. Like much of the surrounding landscape, the tree was incorporated into the Haida Indians’ vast repertoire of stories, but as far as anyone knows, it is the only tree, in what was then an infinity of trees, ever to be given a name by the Haida people. They called it K'iid K'iyaas: Elder Spruce Tree. According to legend, it was a human being who had been transformed.

Although it was well known to those who lived around the Yakoun Valley, the golden spruce wasn’t discovered by scientists until well into the twentieth century. By then it was more than 200 years old and all but impossible to miss. When the Scottish timber surveyor and baronet Sir Windham Anstruther stumbled across the tree in 1924, he was dumbfounded. "I didn’t even make an ax mark on it," he told one reporter before he died, "being, I suppose, a bit overcome by its strangeness in a forest of green." For years afterward, no one knew quite what to make of Sir Windham’s arboreal unicorn. Some suggested it might be a new species, native to the archipelago; others supposed the tree had been hit by lightning, or was simply in the process of dying. As it turned out, the tree was alive and well; it was just fantastically rare. So rare, in fact, that it warranted its own scientific name: Picea sitchensis 'Aurea.' Picea sitchensis is the Latin name for the Sitka spruce, and Aurea is Latin for "golden" or "gleaming like gold," but it can also mean "beautiful" or "splendid." Sixteen stories tall and more than twenty feet around, the golden spruce was unique in the botanical world.

'The New Yorker:' The Golden Bough by John Vaillant 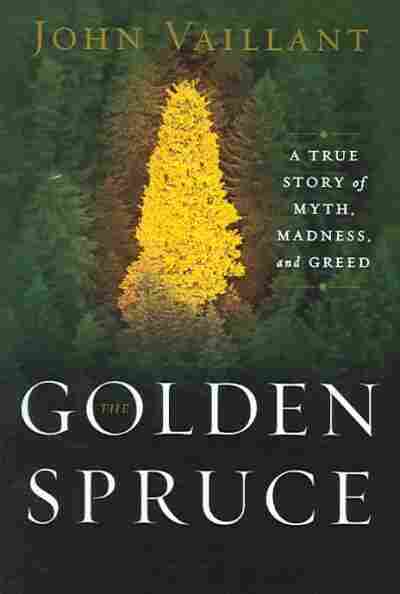 A True Story Of Myth, Madness, And Greed