Accessibility links
Of Montreal: Reviving the Psychedelic Sound Kevin Barnes is the front man of the Athens, Georgia neo-psychedelic band: Of Montreal. He talks with NPR's Liane Hansen about their latest album, The Sunlandic Twins.

Kevin Barnes is the front man of the Athens, Georgia neo-psychedelic band: Of Montreal. He talks with NPR's Liane Hansen about their latest album, The Sunlandic Twins. 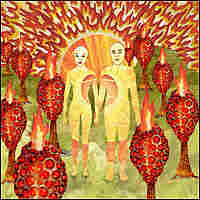 The cover of 'The Sunlandic Twins' reflects the band's musical style. hide caption 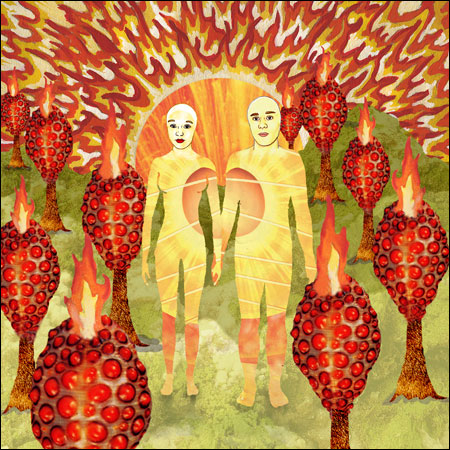 The cover of 'The Sunlandic Twins' reflects the band's musical style.

Three from Of Montreal

I Was Never Young

Wraith Pinned to the Mist and Other Games

You might think a band with the name Of Montreal is based north of the border in Canada, but the band is actually based in Athens, Georgia. Lead singer and founder Kevin Barnes dubbed the band after a failed romance with a woman in the Canadian city.

HANSEN: Of Montreal has a new recording, their seventh. It's called "Sunlandic Twins," and Kevin Barnes is in the studios of WMFE-FM in Orlando, Florida.

HANSEN: All right. So who are these "Sunlandic Twins"?

Mr. BARNES: Well, it was actually taken from a dream that wife had. She imagined the two of us, we're off on this faraway planet and it was called Sunlandia. So naturally, the two of us were the Sunlandic twins.

Mr. BARNES: Yes, it was. And it was somewhat inspired by that Nicolas Roeg movie "The Man Who Fell to Earth," starring David Bowie.

HANSEN: Sure. Let me ask you this and see if it's true. Your brother has done the artwork for some of your other albums. Right?

HANSEN: Is it true that if I send in my picture and pay him $150, he'll draw an illustration with my picture in it?

HANSEN: You know, this is awfully strange starting to talk about an album of music starting with the art. Right?

Mr. BARNES: Oh, yeah. Well, that's good. I think that my brother's art plays a big part--well, as far as, like, creating an atmosphere, which is what we try to do with each record. We want each record to have its own strong personality. With David's artwork, it really adds a lot to that, what adds the visuals to it. I mean, I know music can be very visual and that's what we try to do with our music is to make it sort of cinematic.

(Soundbite of "Wrath Pinned To The Mist (And Other Games)"

Mr. BARNES: With my brother's artwork, it sort of jumps out at you and you kind of have to take notice.

HANSEN: Hmm. It reminds of me of those kind of psychedelic album covers you used to see...

HANSEN: ...back in the--Is psychedelia something that is an influence of yours?

Mr. BARNES: Well, it's funny. Early on, we were extremely into '60s psych pop stuff, like The Pretty Things, Soft Machine, records like that, but then also, like, The Kinks were a huge influence on us. Like, the record like the "Village Green Preservation Society" and "Arthur." And then also, there's this Brazilian group called Osmi Tantes(ph), and they're sort of like the perfect marriage of all things that we really love and sort of unpredictable arrangements and really wild orchestrations but also, like, really catchy melodies.

OF MONTREAL: (Singing): I never ever stop wondering, wondering if you still think of us. I don't need a photograph 'cause you've never left my mind. No, you've never left my mind. I remember feeling like a ship whose captain was too drunk to steer, and you watched as I was sinking waving sadly from the pier. Memories don't go away. I remember every day.

HANSEN: There is really kind of a retro pop feel to the stuff. I mean, sometimes I felt like I was listening to Queen at some time. You know, you've been compared to The Beach Boys; even Rolling Stone said that you sounded like The Kinks. Does it bother you when your sound is compared to others like that?

Mr. BARNES: No, because I realize that with music, you're kind of--it's almost inevitable; you have to sort of lift from other people. But as long as you do it in your own slightly original way, it's OK. So, I mean, I take from everybody, from Fela Kuti to Brian Eno, you know, from Prince to Queen. So I think it's OK as long as you sort of blend it in an interesting way that's slightly original. I don't think that to be completely original is that important.

HANSEN: Hmm. How would you describe your signature sound, though? What would you just say is the sound of Of Montreal?

Mr. BARNES: Well, it's sort of evolved a lot over the years. The first record was very low-fi and very intimate. We've always recorded our records in our houses, so I've moved around a lot. Basically, every record was recorded in a different bedroom, but they've all been recorded in bedrooms. So I think that it always has that sort of thing going for it, sort of intimate and very personal. And I think most people can appreciate that the music that we're making means a lot to us, also, you know, that it's not about making money or having a certain kind of image; it's just all about expressions.

OF MONTREAL: (Singing) Why do I always have to tell you forget about the precious guy, forget about the life we knew? We can never be stripped of anything we love. May we grow so gentle, never go mental.

Mr. BARNES: Yeah. I keep a little notepad with me, and I try to pay attention a lot to any sort of idea I have. And a lot of the ideas I just sort of throw away, but some of the ideas I keep. And especially since--when we're on the road as much as we have been, it's kind of difficult; like, you don't really have any time to sit at a desk and write every day. So I just get ideas while I'm driving. I probably should be paying more attention to the road, but I'm really just thinking of ideas. I do have, like, about seven or eight new songs that I'm really excited about starting to record this summer, and hopefully put out another record either in the spring or the fall of next year.

HANSEN: Will you record it in a bedroom?

HANSEN: Of Montreal's newest CD, "The Sunlandic Twins," is available from Polyvinyl Record Company, and Kevin Barnes joined us from Orlando, Florida, where he's on tour with the band.

Mr. BARNES: Thank you very much.

HANSEN: You can hear more music from Of Montreal and get a good look at that cover art at our Web site, npr.org.

This is NPR's WEEKEND EDITION.