Accessibility links
Blair and Bush Huddle at White House President Bush meets with British Prime Minister Tony Blair at the White House. Iraq and the upcoming G-8 summit that takes place next month in Scotland are topics of discussion.

President Bush meets with British Prime Minister Tony Blair at the White House. Iraq and the upcoming G-8 summit that takes place next month in Scotland are topics of discussion. 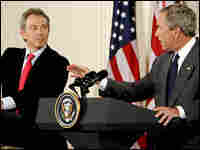 Britain's Tony Blair met with President Bush at the White House today, fresh from his re-election as British prime minister. Blair is here to push the president on a pair of foreign-policy objectives: aid for Africa and global warming. The meeting reveals some differences between these two leaders. Blair wants to double international aid to Africa; the president does not back that call, and he said the US is giving more than ever.

President GEORGE W. BUSH: And when I said we're going to lead an HIV/AIDS initiative, the likes of which the world has never seen before on the continent of Africa, we have done that, and we're following through. And so when I say we're going to do more, I think you can take that to the bank, as we say, because of what we have done.

BLOCK: The president speaking at a joint news conference with Tony Blair.

Other topics came up, including a recently revealed British memo alleging that President Bush and the White House decided early to go to war in Iraq and that intelligence was altered to support that decision. Blair took issue with that reading.

Prime Minister TONY BLAIR: No, the facts were not being fixed in any shape or form at all. And let me remind you that that memorandum was written before we then went to the United Nations.

BLOCK: NPR's Don Gonyea joins us from the White House.

And, Don, first let's talk about aid to Africa and what Tony Blair wants as opposed to what the White House is doing. A lot of numbers thrown around today. Why don't you clarify what some of them are?

Yes. The president stresses that the US is giving $1.4 billion this year alone in aid to Africa, more than ever, he says, and that that number is going up. Further, he says the US has over four years tripled its overall aid to Africa. Now those numbers are separate--separate--from what Tony Blair wants to do. He wants to take what all industrialized nations are currently giving in aid--that includes the numbers, though, that the president is talking about--and he has set a goal of doubling it again--again--annually. That's why these are two different things.

And Blair is really proposing a huge leap, really, from where things are now. He says it's not a number that was just pulled out of the air but one that was calculated by what African nations need to fight disease and to stop the spread of AIDS and for peacekeeping and to build schools and to build democratic institutions. Again, the Bush administration has not signed on to a plan of such scope.

BLOCK: Now on the topic of global warming, this has been a point of contention for both Tony Blair and George Bush since the early days of the Bush administration, no?

GONYEA: It has, and it continues to be. The president was asked point blank today if he believes climate change is manmade and if the US has a responsibility to address it. He did not answer that directly, instead saying it needs study. He says the US is committed to developing new cleaner technologies and promoting nuclear power. He said, `You can be good for the air and for the water and good for business and trade and economic growth at the same time.' He did not say what he would do to join in on Tony Blair's call for a serious international approach to this. And recall that well before the president angered many Europeans on Iraq, he angered them with his environmental policies right as soon as he took office.

BLOCK: And, finally, Don, the so-called Downing Street memo that was written by a British national security aide back in July of 2002, before the war began. That memo said that intelligence and facts were being fixed to support the policy of a military overthrow of Saddam Hussein.

GONYEA: Right. The memo has been getting more and more attention since it was first printed in The Times of London about six weeks ago. Critics of the president and of Blair say it is a key piece of evidence saying that the intent was always war. The denials today were, though, really similar to what we've heard from President Bush in the past, who at one point today said, `The world is better off with Saddam Hussein out of power.' So the memo is getting talked about, but, again, the reaction from the White House and from Blair is very, very much like what we have heard them say in the past.