Accessibility links
'New York Times' Columnist Brings Back Horror Stories from Sudan Melissa Block talks with Nicholas Kristof, a columnist for the New York Times, about his recent trip to Darfur, in western Sudan. Kristof tells the story of one woman who was gang-raped by eight men. After her husband was killed, she marched across the desert with her five children to seek shelter in a refugee camp. Her youngest child later died.

Melissa Block talks with Nicholas Kristof, a columnist for the New York Times, about his recent trip to Darfur, in western Sudan. Kristof tells the story of one woman who was gang-raped by eight men. After her husband was killed, she marched across the desert with her five children to seek shelter in a refugee camp. Her youngest child later died. 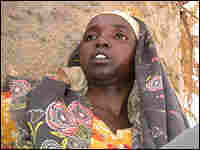 A new round of negotiations aimed at ending the war in Darfur in western Sudan is expected to begin this week. It's estimated nearly 200,000 people have been killed and two million forced from their homes in two years of fighting. Also, the International Criminal Court in The Hague said yesterday it has begun investigating alleged war crimes in Darfur. The Sudanese government says it will not cooperate with that investigation. New York Times columnist Nicholas Kristof has just returned from Darfur, his fourth trip to the region. He joins us from New York.

And let's start with one of the more positive things that you saw there, something that hinted at progress. This was the village of Labado.

Mr. NICHOLAS KRISTOF (The New York Times): That's right. Labado had been totally destroyed last December by a Sudanese army and Janjaweed attack; everybody driven out. It was turned into a complete ghost town. And this was, you know, a major town of maybe 25,000 people. And you kind of had the feeling that it was never going to recover, but, in fact, the African Union sent a very small outpost back there--only about 50 people--and, incredibly, people started returning, you know, out of the bush, out of their hiding places. And now I'd say there are about 5,000 people back. And, you know, it's one of the indications of how little it actually takes to establish security and to bring life back a little bit to normal.

BLOCK: So that would imply that change can happen, that things can make a turn for the better.

Mr. KRISTOF: Yeah. You know, a lot of times when I'm out in Darfur, I just think that it's going to be like this for the next 20 years. But in a place like Labado, when you see people rebuilding their huts and willing to go back and start farming again, once they have security, you think, `Well, you know, if only there is a peace agreement, if only there is a little bit of security, then we can get this behind us.'

BLOCK: You also filed a column, though, after you visited the Kalma refugee camp, and you write about a woman you met there whom you talk about as a compelling argument for why the US should care about what's going on in Darfur. Tell us about Magbula(ph).

Mr. KRISTOF: Magbula was from a small village that last fall was attacked by the Janjaweed, these militias that had been primarily responsible for attacking villages, for burning huts, raping women, killing men. So she fled from that to a larger town to seek safety. She was with her husband and five children. And then they were attacked in that larger city, so she fled again to a third place, and then there they were attacked for the third time. Her husband was killed. She was gang-raped by eight men. She set out across the desert with her five children, and the youngest was just a baby, six months old. And after trekking across the desert, she got to the Kalma camp. The Sudanese government has not been registering new entrants, new arrivals, at the camp, I think, because it just wants to keep people away. And just four days before I arrived, her baby died.

BLOCK: They're not registering people, meaning that UN agencies can't provide them food?

Mr. KRISTOF: That's correct. There is no food distribution unless you're registered, no tent distribution unless you're registered. She was able to get medical care from a foreign aid organization, but that was the only thing she was able to get. And I must say that these other refugees were sharing their food with her and with other people in her situation. And it was really, you know, kind of inspiring to see these people, who had almost nothing and whose families had been largely wiped out, sharing what little they had with Magbula and people like her.

BLOCK: Rape has been a chronic problem at these camps, as women leave the camps to go forage for wood to bring back to cook with. You write in one of your columns that the Sudanese government is refusing to allow aid groups to bring more rape kits into the camps in Darfur. Why? Why would they do that?

Mr. KRISTOF: In general, they've been very discouraging to aid groups trying to bring in all kinds of medicine, and so it may simply be a matter of this just, you know, creating headaches for aid groups. But they also insisted rape is not taking place, and so if you don't have rape, then why would you need rape kits?

BLOCK: What's in these rape kits?

Mr. KRISTOF: They provide medication that, if taken with 72 hours, reduces dramatically the risk of getting infected with HIV.

BLOCK: You've written about what you call the `world's moral indifference' to Darfur. Do you see any signs that that indifference is lifting?

Mr. KRISTOF: Well, I must say that if you look at this from a historical perspective, then, you know, what is surprising is not that we're indifferent; it's actually that we've done anything at all. I mean, the traditional pattern is for the world to do nothing at all while a genocide is under way and then, 10 years later, kind of wring its hands and say, `Oh, how could we have allowed this to happen? Never again.'

No, we haven't done nearly enough, but, you know, it's true that international community has taken some steps. There has been some progress compared to past genocides. But what I just find so dispiriting is that, you know, this has gone on for two years, and these days a majority of Americans know what the word Darfur is. It does conjure images of absolutely awful behavior. And yet we're still not taking a strong position against it.

Mr. Kristof, thanks very much for talking with us.