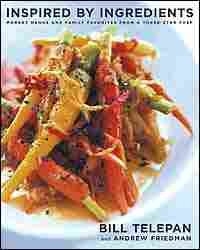 "This is the book to turn to for at-home summer entertaining," says food writer Heidi Swanson. Top chef Bill Telepan organizes his creations by season, putting this unusual take on corn in his summer section.

To make the sauce: Peel, pit, and chop the nectarines. Put them in a small non-reactive saucepan with 1/4 cup of the sugar and the lemon juice. Cook over medium heat, stirring occasionally. When the nectarines are thick and pulpy, 7 to 8 minutes, remove from the heat and puree until smooth. A handheld immersion blender is the ideal tool for doing this, but a standing blender or food processor fitted with the metal blade works fine as well. Add 1/2 cup of the buttermilk and blend for a couple of seconds to combine. Cover and refrigerate until ready to serve.

Bring a pot of salted water to a boil. Add the corn and boil until tender, about 10 minutes. Drain and set aside to cool. When cool enough to handle, one ear at a time, hold the corn upright on a cutting board. Cut into the middle of the corn kernels and slice down the entire length of the cob. Slice again to remove the other half of the kernels. Continue with the entire ear. Discard the cob and reserve the cut corn and any liquid. (You should have 3/4 cup of cut kernels.) One ear of corn may be enough; if not, repeat the slicing and chopping with the other ear.

Lightly beat the egg in a medium bowl. Add the remaining 1/2 cup buttermilk, 1/2 cup of the sugar, and the melted butter, and stir to combine. Combine the whole wheat flour, all-purpose flour, cornmeal, salt, baking powder, baking soda, and nutmeg in a large bowl. Whisk together the dry ingredients to remove any lumps and evenly incorporate the leavenings. Add the liquid ingredients to the dry and mix until just combined. Add the corn kernels and their liquid and the vanilla. Cover the bowl with plastic wrap and chill until firm, about 1 hour.

Roll the dough out on a floured surface into a rectangle about 4 by 6 inches and 1/4 inch thick. Using a knife or rolling cutter, cut the dough into 1/2-inch squares.

Pour oil into a large, heavy-bottomed pot to a depth of 3 inches. Heat over medium-high heat to 365"F. Line a plate or tray with paper towels. Fry a few doughnuts at a time. Turn each doughnut when it rises to the top of the oil and turn again after 1 minute. Fry the doughnuts until golden then remove with a slotted spoon and drain on the paper towels. When all the doughnuts are fried, combine the remaining 1/2 cup sugar and the cinnamon in a bowl.

Toss the warm doughnuts in the cinnamon sugar. Serve with the nectarine dipping sauce alongside.

Recipe from Inspired by Ingredients: Market Menus and Family Favorites from a Three-Star Chef by Bill Telepan. 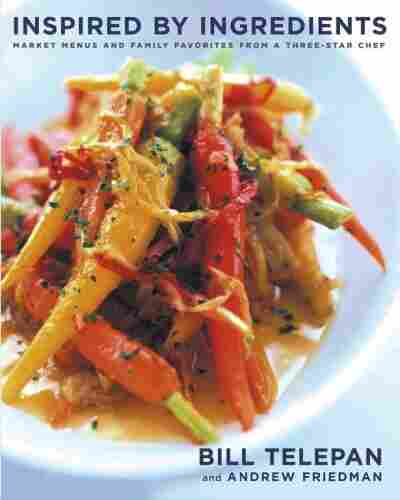 Market Menus And Family Favorites From A Three-Star Chef