Accessibility links
Unknown Bach Aria Discovered in Germany A previously unknown composition by Johann Sebastian Bach has been discovered by a classical music scholar in Germany. The two-page, handwritten aria was composed in 1713 for soprano, strings and basso continuo. 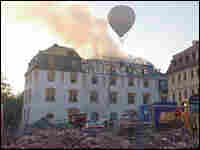 Bach's unidentified music barely eluded a devastating fire at the Anna Amalia Library in Sept. 2, 2004. It is seen here the day after the blaze. Stiftung Weimarer Klassik hide caption 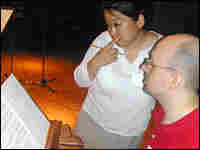 A printed copy of the lost score, the first vocal work by Bach to surface in 70 years. The Leipzig Bach Archive hide caption

A printed copy of the lost score, the first vocal work by Bach to surface in 70 years.

An unknown composition by Johann Sebastian Bach has been discovered by a classical music scholar in Germany. Michael Maul, a researcher at Leipzig's Bach Archive, found the score two weeks ago among documents from the Anna Amalia Library in Weimar.

There was no previous record of the music, a two-page handwritten aria dated October 1713, when Bach was 28. But the archive has now verified the piece, which had been stashed in a box of birthday cards, as the work of Bach.

According to the archive, the composer wrote the work for soprano, strings and basso continuo in honor of the 52nd birthday of Duke Wilhelm Ernst of Saxe-Weimar, whom Bach served as court organist. It is likely that he performed it, and that the duke was pleased: Soon after, Bach became Ernst's concertmaster, and received a raise.

Scholars say the score was something of a departure for Bach, a light strophic aria in which lyrics — in this case, a 12-stanza poem — are sung over fairly constant playing. It is the first vocal music by the Baroque master to be discovered in 70 years.

And it missed being destroyed by only months. A fire ravaged the Anna Amalia Library, where Bach's music had been stored in a box along with other birthday wishes for the duke. While many artifacts and documents were lost in the fire, the box had been sent to Leipzig for restoration months earlier.

For a special Performance Today premiere, soprano Ah Hong and harpsichordist Joseph Gascho performed an excerpt from the 292-year-old aria in NPR's Studio 4B.

An email about an 18th century pamphlet translated into a national performance of an unknown work by Bach in less than 48 hours. Music Editor Marty Ronish shares the story.

An Internet listserv for Bach aficionados posted a note about the newly discovered Bach aria on Tuesday morning. NPR's Performance Today announced it on Wednesday, but we wanted to do more than talk about the music. We wanted to see the score — and even hear it. So Performance Today asked the Leipzig Bach Archive for a copy. They would send only two and a half lines of the music.

Other news sources, like The Boston Globe, published two different lines of the music, so we were able to reconstruct nearly five lines of the piece. Finally, by the end of the day, NPR's Jacques Coughlin managed to get a high-resolution photo of the entire first page of the score, giving us the remaining lines of the first half of the aria.

Working with Morning Edition producer Jim Wildman, we called Peter Wollny at the Leipzig Bach Archive and had a fascinating exchange with him. But reading the music itself took more sleuthing. Bach's handwriting is pretty hard to decipher. Peter Wollny read us the text of the poem, and we matched it up with the manuscript.

To perform the music, we found two really wonderful musicians, young up-and-comers: soprano Ah Hong and harpsichordist Joseph Gascho. Immediately upon being called, Gascho loaded up his harpsichord and brought it to the studio, where the work of playing the aria began.

Reading music from a photocopy of a handwritten manuscript in Old German script is not easy. The musicians worked for about three hours to figure out what the manuscript said. They had to decipher the text-underlay and the harmonies, since those aren't written out in 18th-century manuscripts.

We recorded the song at 8 p.m. on Wednesday, and the piece aired Thursday morning. While it's difficult to be sure, the result may be the first public performance of the piece in 292 years.