Accessibility links
Spinning Brand Synergy in Music Videos When MTV first started in 1981, the network broadcast wall-to-wall music videos. Since then the network has grown increasingly corporate with less music and more commercialism. MTV's Movie Awards show, airing tonight, is sign of how far from those beginnings the channel has come. 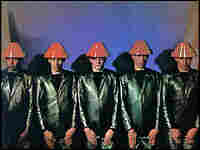 The cover for Devo's Freedom Of Choice, of 1980. hide caption 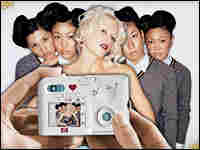 Gwen Stefani's new single is tied to a designer camera from HP; the camera also appears in her video. HP hide caption

When MTV first started in 1981, the network broadcast wall-to-wall music videos. The network's Movie Awards show, airing tonight, is an indication of how far from those beginnings the channel has come.

In the 1980s, music videos could propel a song to the top of the charts. But today's new bands often stand a better chance of getting exposure on The OC than on MTV. And fans seem not to be missing what once seemed destined to be a staple of television.

In recent years, record labels have been reluctant to finance a high-budget video — unless a deal can be worked out. The process, called co-branding, is not product placement. Co-branding happens when a product and a star become inseparable.

Those concerns didn't exist when pioneers like Devo took their unique, art-school videos to the airwaves. The men behind "Whip It" and other hits had no corporate partners in wearing terraced red hats and yellow jumpsuits.

One of the most striking recent examples of co-branding was not actually planned. The song "Pass the Courvoisier," by Busta Rhymes and P. Diddy — who brandished a bottle of the gentleman's liquor in the song's video — sparked a 30 percent rise in sales when the song came out two years ago.