Accessibility links
Maine Islands Weigh Secession from Mainland Skyrocketing property taxes have prompted some Maine islands to consider secession. On Chebeague Island, residents feel they pay more money in taxes than they get back in services. 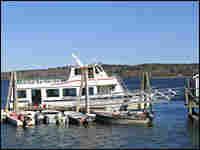 Voice from the Island

Donna Damon is president of the Chebeague Historical Society and Chebeague's representative on the Cumberland Town Council. Her family history on the island goes back to 1756. Hear Damon discuss:

The Relationship Between Chebeague and the Town of Cumberland Over Time

The Challenges of Island life and Why People Stay 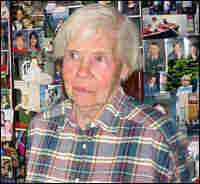 Mabel Doughty, who describes herself as a "lobsterman," has lived on Chebeague Island for 60 years. Andrea de Leon, NPR hide caption 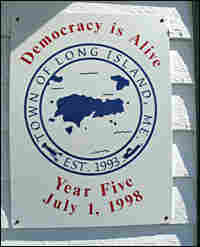 A sign marks the fifth anniversary of Long Island's secession from Portland, Maine. Long Islanders say they've lowered their property taxes and improved their services in the decade since the split. Chebeaguers hope to replicate that success. Howard Berkes, NPR hide caption

Residents of Maine's Chebeague Island have shared government with the 7,000 or so residents of the mainland town of Cumberland for some 200 years. But now, skyrocketing property values and taxes have islanders contemplating secession from the town that has long taxed, schooled and ruled them.

Many of Chebeague Island's 350 year-round residents feel they pay more money in taxes then they get back in services. But those pushing for self-government say money is not their primary concern.

Some worry that the mainland town government doesn't take their needs into account sufficiently. Others note cultural differences: Cumberland was once dominated by farmers. It's now a Portland suburb, a bedroom community for urban professionals. The island remains rural and many of its residents are lobstermen.

Still others worry about schools. Last year, the mainland-based school district proposed eliminating the fourth and fifth grades in Chebeague's school. Older students already ride the ferry to school. Many islanders worry that the move to transfer younger children to the mainland would lead to the shutdown of the island school.

Losing an island school is often the first step to losing an island's year-round population. "If that happens, we'll lose our community that everybody here just… cherishes," says island mechanic Dave Stevens. "It'll turn into a summer community. We're just not about to let that happen."

Though other islands have done it, secession won’t be easy. Both the town of Cumberland and the Maine legislature must approve before Chebeaguers get a chance at self-government.

By the Numbers: The Chebeague Island Story