Accessibility links
Efforts to Bring More Jurors to the Courthouse The decisions of juries have featured prominently in some of this year's biggest news stories -- from Arthur Andersen and Laci Peterson to the current trial of Michael Jackson. In the first part of series on juries, Ari Shapiro reports on what the legal community is doing to bring more potential jurors into the courthouse.

Listen
Efforts to Bring More Jurors to the Courthouse

The decisions of juries have featured prominently in some of this year's biggest news stories — from Arthur Andersen and Laci Peterson to the current trial of Michael Jackson. In the first part of series on juries, Ari Shapiro reports on what the legal community is doing to bring more potential jurors into the courthouse. 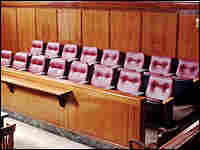 In California today, members of a jury are deciding the fate of Michael Jackson. In Alabama, 12 more citizens have been deliberating the case against former health-care executive Richard Scrushy. As those jurors and countless others consider cases across the country, we are going to consider the state of the American jury. Throughout this day, we'll have reports on NPR programs about jury duty, and we will start by hearing about efforts to get you to show up for jury duty when you're called. Here's NPR's Ari Shapiro.

There are two opposite ways of looking at jury duty. First, there's the model of jury duty as a noble calling. This is the perspective that's generally shown on TV shows and in movies, such as "The Verdict" with Paul Newman.

(Soundbite from "The Verdict")

Mr. PAUL NEWMAN: You are the law, not some book, not the lawyers, not a marble statue or the trappings of the court. See, those are just symbols.

SHAPIRO: This model of jury duty, as the essence of democracy, is enshrined in the US Constitution, and it's fervently preached by Massachusetts chief Judge William Young.

Judge WILLIAM YOUNG (Massachusetts Chief Judge): The Constitution says in Article III, all criminal cases, say, for impeachment shall be tried to a jury. So the jury is in the very separation of powers. The jury is a direct democracy. It's the New England town meeting writ large. It's the people themselves governing.

SHAPIRO: The other way of looking at jury duty is reflected in a quote by the comedian Norm Crosby. He said, "When you go into court, you're putting your fate into the hands of 12 people who weren't smart enough to get out of jury duty." Chief Judge Judith Kaye of New York sees that attitude frequently. She estimates the public attitude towards jury service as...

SHAPIRO: Kaye is co-chair of the American Bar Association's Commission on the American Jury, which is working to educate the public about jury duty. When Kaye became chief judge of the state of New York in 1993, there were 23 categories of people who were automatically exempt from jury duty in the state.

SHAPIRO: New York's jury pool basically consisted of those who didn't have lobbyists in Albany. At Kaye's urging, the state Legislature eliminated all of the exemptions. Now even former New York Mayor Rudolph Giuliani has been summoned for jury duty. He heard a landlord-tenant dispute and sided with the landlord.

The trend towards eliminating automatic exemptions is growing across the country, but that doesn't improve people's attitudes towards jury duty, and those attitudes are rather complicated. There are bits of the Paul Newman model and bits of the Norm Crosby model, according to a recent Harris Poll. Robert Grey is president of the American Bar Association, which commissioned the survey.

Mr. ROBERT GREY (President, American Bar Association): The public overwhelmingly, over three-quarters of those surveyed, one, said they thought it was important to do; two, said that if they had a case, they'd rather have it tried by a jury than a judge; and, three, said--based on those who actually served on a jury, said that they would do it again.

SHAPIRO: That's how Americans feel about jury service in general terms. But when people receive the summons in the mail, Grey describes the common reaction as...

Mr. GREY: I will serve on a jury, just not today. And it happens to all of us that we get he summons to serve and we say, `Oh, my goodness. How inconvenient is this? I have all these plans, and now I have to go and appear in court for somebody to decide whether I'm going to serve on a jury.'

SHAPIRO: The ABA has devoted this year to studying and improving the American jury system. There's an element of public relations to their project and an analysis of what works best both in and outside of the courtroom. Tom Munsterman directs the Center for Jury Studies at the National Center for State Courts. He says there's a real need for the kind of work the ABA is doing. In Washington, DC, for example, the response to jury summonses is extremely low.

Mr. TOM MUNSTERMAN (Center for Jury Studies): The fact is that when we take, let's say, a hundred names from the list, we get about 15, 16 percent of the people showing up.

SHAPIRO: That does not mean that 85 percent of the people called to jury duty in Washington throw their summonses in the trash. Munsterman says many people aren't getting them in the first place because of outdated and incomplete juror lists.

SHAPIRO: So jury summonses are being sent to people who have died or moved away. Problems like this exist around the country. Munsterman says clerks could get many more people to the courthouse just by thinking creatively about how to improve juror databases. Some states use voters lists, others use driver's license rolls, state income tax filings or a combination. There's no uniform national policy for handling jurors, and most people working in the system seem to believe that's a good thing. `The drawback to state and local independence,' says Munsterman, `is that it becomes more difficult to improve the system.'

Mr. MUNSTERMAN: I can't tell you the number of courts I visit, and they say, `Doesn't everyone do it this way?' And you say, `No, you're the only one.'

SHAPIRO: The Center for Jury Studies and the ABA are among the groups trying to create forums where judges and courtroom clerks can bounce ideas off each other to find out what works and what doesn't. There are some common themes. For example, everyone wants to use potential jurors in the most efficient way possible. Judge Kaye says this gets at one of her biggest pet peeves.

Judge KAYE: The thing that upsets me more than anything else is coming into a courthouse jury assembly room and finding it full. That drives me crazy.

SHAPIRO: She says a full assembly room means people are being summoned for jury duty who are not needed. Then when they leave the courthouse unused at the end of the day, they feel as though their time has been wasted and their opinion of jury duty sinks.

Judge KAYE: Overwhelmingly, people should be brought to jury service. They should get on juries. They should deliberate to verdict, right? Isn't that what this is all about? It's not to fill up our jury assembly rooms with people cooling their heels.

SHAPIRO: Roughly 80 percent of the people called to serve on a jury will never actually hear a trial, so the scene of potential jurors cooling their heels is unfortunately quite common. That doesn't seem to bother the people who showed up for jury duty on a recent weekday morning at the Moultrie Courthouse in downtown Washington, DC. This is not a representative sample of the local population. These are all people who responded to their summonses. None of them seem too resentful. Mary Schimp(ph) calls it part of her civic duty.

Ms. MARY SCHIMP (Received Jury Duty Summons): I know that sounds sort of corny, but I really believe that. We get to vote. We get to have a lot of freedoms in this country. I'm happy to serve, as long as they're efficient about it.

SHAPIRO: She's been called for jury duty several times, and this is the first time she's been chosen to hear a case. She sees some room for improvement.

Ms. SANDERS: They don't compensate you at all. It's $15 parking--I just parked--and we get $4 a day for doing it, you know. So that doesn't buy two cups of coffee.

SHAPIRO: Juror compensation is a major focus for those who are trying to improve the system. Judges want states and private employers to commit to paying jurors for their time. Texas recently announced that it was raising juror compensation to $40 a day. This conversation about efficiency, participation and compensation is all just about getting people to the starting gate. Once the jurors are in place and the trial begins, a whole new set of questions arises about the best principles to govern juror behavior, and that debate is the subject of a story this evening on "All Things Considered."

INSKEEP: You can test your knowledge of the American jury system by taking a quiz at our Web site, npr.org. If you want to defer taking the quiz, you can do so one time if you have a family emergency or a note from your doctor.

This is MORNING EDITION from NPR News.