Accessibility links
Rural Maine Towns Give Up on Self-Government Some towns in rural Maine are ceasing to exist as independent entities, instead putting local decisions in the hands of distant state bureaucrats. They are giving up a tradition of pure democracy.

Listen
Rural Maine Towns Give Up on Self-Government 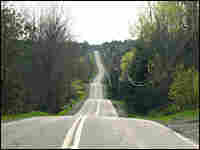 This ribbon of state highway is the closest thing to a Main Street in Cooper, Maine. Howard Berkes, NPR hide caption

Bailey Grant, a game warden for the state of Maine, reflects on how de-organization has affected his hometown of Centerville. The town of 24 people in Maine's "Downeast" region de-organized last fall after 142 years in existence.

Stuart Shotwell, a freelance editor and writer who lives in Cooper, describes why he still thinks of Cooper as a town, and what is lost if it de-organizes.

Jon Reisman, Cooper first selectman and professor at the University of Maine at Machias, reflects on Cooper's history and changing demographics. 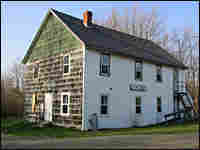 The Cathance Lake Grange Hall is still used for community gatherings. Next year, residents of Cooper may vote on whether to de-organize in what could be their final act of self-government. Howard Berkes, NPR hide caption

Some towns in rural Maine are ceasing to exist as independent entities, instead putting local decisions in the hands of distant state bureaucrats. In doing so, they are giving up on a tradition of pure democracy more than a century old, in which citizens directly determine policies and budgets in annual town meetings.

In the past two decades, nine towns have joined what is called the Unorganized Territory, a vast region of sparsely inhabited forests and unincorporated places, mostly in northern Maine. The area is half the state, bigger than the state of Maryland, with about 8,000 people. Those giving up on self-government and moving to the Unorganized Territory are among Maine's smallest towns. Faced with the burdens of government, and rising property taxes, a dozen more towns have shown interest in joining.

Among those considering the move is Cooper, a scattered collection of homes up north in the Downeast region of the state. Most of Cooper's 145 residents are stretched out along a two-lane state highway for 7.5 miles. There's no main street, no downtown, no sidewalks, no streetlights and no school.

Cooper has been incorporated as a town since 1822, two years after the state came into existence. Despite the town's long tradition of self-government, its residents think de-organizing Cooper and joining the Unorganized Territory would help lower much of their costs -- by helping to disperse the tax burden across many more people, for example. De-organization would also alleviate the burden of hiring more and more people to fill town jobs mandated by state law, such as animal control and code enforcement officers.

Still, there are those who mourn the thought of losing the long-standing tradition of pure democracy.

"It's sad, sad, sad, sad," says Doreen Sheive, a Maine native and fiscal administrator of the Unorganized Territory. "You have people giving up hundreds of years of local control and pride in their community."