Accessibility links
Excerpt: 'The Giant Rat of Sumatra or Pirates Galore' When a creaking ship, its bowsprit carved in the shape of a snarling rat, pulls into San Diego harbor it carries with it a 12-year-old cabin boy whose only desire is to get home to his family. Reviewer John Kelly calls the story, set in 1846, a "rousing, swashbuckling tale."

Excerpt: 'The Giant Rat of Sumatra or Pirates Galore'

Excerpt: 'The Giant Rat of Sumatra or Pirates Galore' 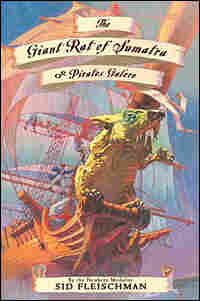 When a creaking ship, its bowsprit carved in the shape of a snarling rat, pulls into San Diego harbor it carries with it a 12-year-old cabin boy whose only desire is to get home to his family. Washington Post columnist John Kelly calls the story, set in 1846, a "rousing, swashbuckling tale."

My story begins on the night an owl blundered into the belfry and rang the church bells. The town awoke with a sense of doom. It was an omen. Something evil was in the air.

Through drifts of fog, an exhausted sailing ship came creaking into the harbor. After a long voyage, it was down to its last puff of wind and its last cask of fresh water.

Under its needle nose of a bowsprit clung a dreadful figurehead -- a giant rat. The creature, painted mustard yellow, had been carved out of a mahogany log felled in the jungles of Sumatra. The rat, big as a tiger, had once glared at the world through bold and cunning emerald eyes. But the gems had been pried out by thieves, leaving the giant rat to wander the seas like a blind man. The ivory teeth had yellowed, but remained bared and sharp as crooked nails -- a rat eager to sink its jaws into the throat of the unwary.

The ship had come halfway across the world to this sleepy bay on the Mexican coast of California. What was she doing in San Diego? The Giant Rat of Sumatra was a pirate ship, a bold outlaw accustomed to plying her trade from Sumatra to the China Sea.

Standing calmly at the ship's rail, I sniffed the air for some dry scent of the earth out there in the dark. It seemed an eternity since I had set foot on land. I'd already had enough of the sea to last me until my voice finally changed. I was twelve years and ten months old and the ship's cabin boy.

I turned to catch sight of the ship's master as he came sliding down the ratlines. The man took a leap like a tall, big-boned acrobat to the bowsprit. There he peered through the rags of fog and shouted orders in midair. "Steersman! An inch to starboard, if you'll be so kind! This channel is tight as a priest's collar! Aye, that's better, shipmates! Steady!"

He was a large man, but I had noticed how light on his feet he was. Drenched by hours bareheaded in the fog, his coarse black hair glistened like needles. He was as apt to be lending a hand pumping water in the bilge as at his sextant fixing the course. He regarded no job aboard ship as beneath him.

It was clear to me that the ship's master was no stranger to this strange port of call. He knew that a vast bed of seaweed lay near the entrance: He skirted it. He appeared as familiar with the bottom of the bay as with the deep creases in his own hands, weathered under foreign suns.

"God bless my eyesight!" he exclaimed with immense pleasure. The captain had a loud, hearty laugh when he felt like laughing, as he did now. "We've brought our pigs to a fine market, sahibs!" It was a Hindi term of respect he was fond of tossing about the decks. "That's San Diego itself hidin' in the fog dead ahead and about to welcome Captain Gallows back. Aye, I've come home after all these years!" He made a sharp chopping motion with his hand. "Drop the hook!"

With a rattling of its rusty chain, the anchor dropped and found the bottom. The ship swung around like a dog pulled tight on its leash.

As I watched him, I could tell that it amused Captain Gallows to sail under such a foreboding name. He flung out orders in a grab bag of languages while he strode toward his quarters. "Jimmy Pukapuka, be so kind as to fetch up a bucket of whale oil and refill the warning lights. In the fog, we shall want to glow like a ghost, amigo!"

"Calcutta, open our last keg of water. And run up our flag!"

"What flag, Cap'n?" replied the second officer, as broadly muscled as a bull.

"Anything but the skull and crossbones. Mr. Ginger! Post a man on watch! Everyone else turn in. Sleep well, shipmates, for tomorrow you will become gentlemen! Cabin boy! We do have a cabin boy, don't we? I recall fishing one out of the sea months ago. Where is that shipwrecked cabin boy?" "Here, sir."

The deck had almost cleared when I sat myself against a deckhouse to polish the boots. Jimmy Pukapuka, a burly Pacific Islander with swirling tattoos on his cheeks, had carried up a full bucket of whale oil. He was soon finished refilling the port and starboard lanterns, with oil left over in the bucket.

"Catch a wink, Shipwreck, boy," he remarked, hanging up the oil bucket and vanishing belowdecks to his bunk.

It was almost inevitable that the crewmen would call me Shipwreck. I had, after all, been dredged up out of the sea. Boston born, I had been taken aboard a smelly whaling ship by my stepfather, an angry man and a harsh ship's officer. He told me that eleven years was quite old enough to earn my own keep. And a sea voyage would toughen me up for a short-tempered world.

After more'n a year and a half, a short-tempered storm off the Philippines had blown the ship into matchsticks. I had found myself clinging like a barnacle to a splintered oak beam. At the other end, cursing to the skies, hung the one-armed chief mate.

The two of us were plucked from the sea by a fast, nimble ship with the figurehead of a great carved rat. Spouting seawater and sputtering, I remember looking around for my stepfather.

"There is no one alive left floating in this storm," the ship's young captain had told me and briskly turned away as one accustomed to death at sea. I recall raising myself to an elbow, as if to check the raging storm for my relative, and then I fell back, exhausted.

The foregoing is excerpted from The Giant Rat of Sumatra by Sid Fleischman. All rights reserved. No part of this book may be used or reproduced without written permission from HarperCollins Publishers, 10 East 53rd Street, New York, NY 10022 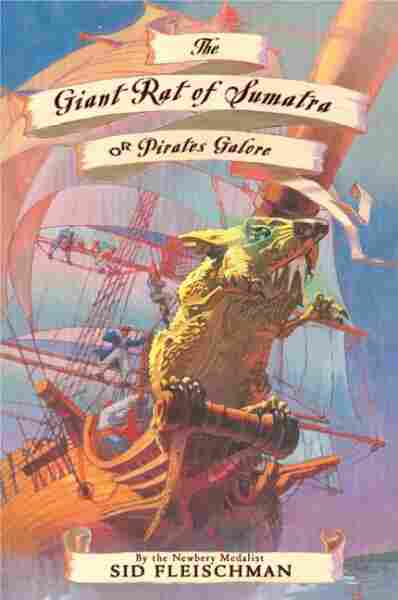 The Giant Rat Of Sumatra or Pirates Galore

by Sid Fleischman and John Hendrix