Accessibility links
Excerpt: 'Wolf Brother' At the start of this fantasy novel, young Torak's father lies mortally wounded by a bear. "But what kind of bear stalks men...?" Tarok asks. One possessed by a demon. And it turns out it is Torak's destiny to defeat the bear, aided by an orphaned wolf cub. Reviewer John Kelly calls it "Clan of the Cave Bear for kids." 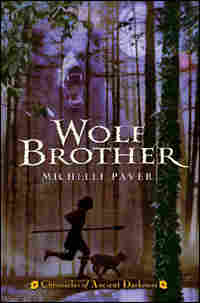 Detail from the cover of Wolf Brother hide caption

At the start of this fantasy novel, young Torak's father lies mortally wounded by a bear. "But what kind of bear stalks men...?" Tarok asks himself. One possessed by a demon. And it turns out it is Torak's destiny to defeat the bear, aided by an orphaned wolf cub. Call it Clan of the Cave Bear for kids. Read a selection from this title recommended by Washington Post columnist John Kelly.

Read an Excerpt: Chapter One

Torak woke with a jolt from a sleep he'd never meant to have.

The fire had burned low. He crouched in the fragile shell of light and peered into the looming blackness of the Forest. He couldn't see anything. Couldn't hear anything. Had it come back? Was it out there now, watching him with its hot, murderous eyes?

He felt hollow and cold. He knew that he badly needed food, and that his arm hurt, and his eyes were scratchy with tiredness, but he couldn't really feel it. All night he'd guarded the wreck of the spruce bough shelter and watched his father bleed. How could this be happening?

Only yesterday -- yesterday -- they'd pitched camp in the blue autumn dusk. Torak had made a joke, and his father was laughing. Then the Forest exploded. Ravens screamed. Pines cracked. And out of the dark beneath the trees surged a deeper darkness: a huge rampaging menace in bear form.

Suddenly death was upon them. A frenzy of claws. A welter of sound to make the ears bleed. In a heartbeat, the creature had smashed their shelter to splinters. In a heartbeat, it had ripped a ragged wound in his father's side. Then it was gone, melting into the Forest as silently as mist.

And where was it now?

Torak couldn't see beyond the firelight, but he knew that the clearing, too, was a wreck of snapped saplings and trampled bracken. He smelled pine-blood and clawed earth. He heard the soft, sad bubbling of the stream thirty paces away. The bear could be anywhere.

Beside him, his father moaned. Slowly he opened his eyes and looked at his son without recognition.

His wound was so deep that as Torak clumsily stanched it with beard-moss, he saw his father's guts glistening in the firelight. He had to grit his teeth to keep from retching. He hoped Fa didn't notice -- but of course he did. Fa was a hunter. He noticed everything.

"Torak . . ." he breathed. His hand reached out, his hot fingers clinging to Torak's as eagerly as a child. Torak swallowed. Sons clutch their fathers' hands, not the other way around.

He tried to be practical: to be a man instead of a boy. "I've still got some yarrow leaves," he said, fumbling for his medicine pouch with his free hand. "Maybe that'll stop the -- "

"Keep it. You're bleeding too."

"Doesn't hurt," lied Torak. The bear had thrown him against a birch tree, bruising his ribs and gashing his left forearm.

Torak stared at him. He opened his mouth but no sound came.

"You must," said his father.

Torak gripped the medicine pouch. There was a roaring in his ears. "Fa -- "

"Give me -- what I need for the Death Journey. Then get your things."

The Death Journey. No. No.

There was a tear in the knee of Torak's buckskin leggings. He dug his thumbnail into the flesh. It hurt. He forced himself to concentrate on that.

Blinking furiously, Torak reached for his father's weapons and laid them by his side. He divided up the arrows, pricking his fingers on the sharp flint points. Then he shouldered his quiver and bow and scrabbled in the wreckage for his small black basalt axe. His hazelwood pack had been smashed in the attack; he'd have to cram everything else into his jerkin, or tie it to his belt.

Torak was aghast. "Not your knife! You'll need it!"

"You'll need it more. And -- it'll be good to have something of yours on the Death Journey."

In the Forest, a twig snapped.

The darkness was absolute. Everywhere he looked the shadows were bear-shaped. No wind.

Just the crackle of the fire and the thud of his heart. The Forest itself was holding its breath.

Torak didn't want to swap knives. That would make it final. But his father was watching him with an intensity that allowed no refusal.

Clenching his jaw so hard that it hurt, Torak took his own knife and put it into Fa's hand. Then he untied the buckskin sheath from his father's belt. Fa's knife was beautiful and deadly, with a blade of banded blue slate shaped like a willow leaf, and a haft of red deer antler that was bound with elk sinew for a better grip. As Torak looked down at it, the truth hit him. He was getting ready for a life without Fa. "I'm not leaving you!" he cried. "I'll fight it, I -- "

Ravens flew up from the trees.

"Listen to me," hissed his father. "A bear -- any bear -- is the strongest hunter in the Forest. You know that. But this bear -- much stronger."

The foregoing is excerpted from Chronicles of Ancient Darkness #1: Wolf Brother by Michelle Paver and Geoff Taylor. All rights reserved. No part of this book may be used or reproduced without written permission from HarperCollins Publishers, 10 East 53rd Street, New York, NY 10022 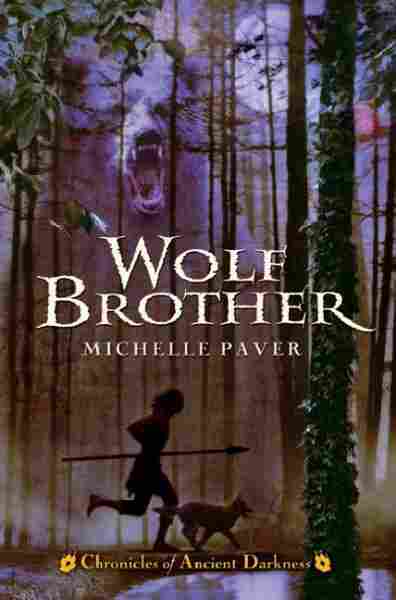