Accessibility links
Excerpt: 'Each Little Bird That Sings' Death is no stranger to 10-year-old Comfort Snowberger and her family. They run the funeral parlor in their Mississippi town. Read an excerpt from this title, one of our summer reading picks for kids. 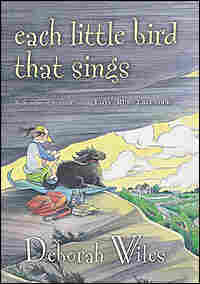 Cover of Each Little Bird That Sings hide caption

Death is no stranger to 10-year-old Comfort Snowberger and her family, in this title recommended by Washington Post columnist John Kelly. They run the funeral parlor in their Mississippi town. But after losing some beloved family members, and being asked to keep an eye on her irritating cousin, Peach, Comfort starts to crack. It's Six Feet Under for the pre-teen set.

I come from a family with a lot of dead people.

Great-uncle Edisto keeled over with a stroke on a Saturday morning after breakfast last March. Six months later, Great-great-aunt Florentine died-just like that-in the vegetable garden. And, of course, there are all the dead people who rest temporarily downstairs, until they go off to the Snapfinger Cemetery. I'm related to them, too, Uncle Edisto always told me, "Everybody's kin, Comfort," he said.

Downstairs at Snowberger's, my daddy deals with death by misadventure, illness, and natural causes galore. Sometimes I ask him how somebody died. He tells me, then he says, "It's not how you die that makes the important impression, Comfort; it's how you live. Now go live awhile, honey, and let me get back to work." But I'm getting ahead of myself. Let me back up. I'll start with Great-uncle Edisto and last March, since that death involves me-I witnessed it.

It was March 27, the first day of Easter vacation. I had just finished deviling eggs in the upstairs kitchen. Uncle Edisto and I were planning the first picnic of spring. My best friend, Declaration Johnson, would be joining us. I was sitting at the kitchen table, scarfing down my Chocolate Buzz Krispies. Uncle Edisto licked the end of his pencil and scribbled onto the crossword puzzle in the Aurora County News. Daddy and Mama were working. Great-great-aunt Florentine had just sneaked her ritual piece of bacon from the paper-toweled rack by the stove.

"I'm off to the garden, darlin's!" she said. "I feel a need to sing to the peas!" She kissed Great-uncle Edisto's head. He looked up from his crossword puzzle and sang-to the tune of "Oh! Susanna"-"Oh, Peas-Anna! Don't you cry for me . . ." I laughed with my mouth full of cereal. Aunt Florentine blew me a kiss, then she drifted out of the room, singing to herself: "For I come from Mississippi with a Moon Pie on my knee!"

"'Moon Pie'!" said Uncle Edisto, poising his pencil over the crossword puzzle. "That's it! Twenty-four across!"

The sky had been clouding up all morning, but I was ignoring all signs of rain. A grumble of thunder brought my dog, Dismay, to the kitchen, where he shoved himself at my feet under the table, pressed his shaggy black body against my legs, and shuddered.

"Oh, now, doggie!" said Great-uncle Edisto, peering under the table at Dismay. "You don't have to worry about no thunder! It's a beautiful day for a pic-a-nic!" Uncle Edisto was always optimistic. "Yessir," he said, smiling at me, "a pic-a-nic at Listening Rock should be just about perfect today!"

Then-Craaaack! went the thunder. Sizzle! went the lightning. And Boom! . . . The sky opened wide and rain sheared down like curtains.

Dismay scrambled for my lap, bobbling the kitchen table on his back.

"Whoa, doggie!" called Great-uncle Edisto. He steadied the table as Dismay yelped and tried to get out from under the table and onto me.

"Down, Dismay!" I shouted. Milk sloshed out of my bowl, and I made a mighty push-back in my chair. Dismay's toenails clawed my legs and his thick coat crammed itself into my nose as my chair tipped sideways with me and Dismay in it. "Umpgh!" The air left my body. My Snowberger's baseball cap popped right off my head. And there I was, lying on the kitchen floor with a sixty-five-pound dog in my face. He stuck his shaggy snout into my neck and shivered. An obituary headline flashed into my mind: Local Girl, 10, Done In by Storm and Petrified Pet!

Into the middle of all this commotion clomped my little sister, Merry, wearing Mama's high heels and a red slip that pooled around her feet. I peeked at her from under my dog blanket. As soon as she saw me, her eyebrows popped high and her mouth rounded into a tiny O of surprise.

"No," I said. I spit out dog hair. It was fine and silky and tasted like the cow pond.

"You all right, Comfort?" Great-uncle Edisto towered over me. He wore fat blue suspenders, and I could smell his old-person-after-shaving smell.

My head hurt. My plans were ruined. My dog was overwrought. But other than that, I was fine.

Downstairs the front doors slammed, and my older brother, Tidings, who had been painting the fence by the front parking lot, yelled, "Attention, all personnel! Where are the big umbrellas! I need rain cover!"

Dismay immediately detached himself from me and scuttled for the grand front staircase to find Tidings, who was bigger than I was and who offered more protection.

I gazed at the ceiling and took stock of the situation. One: It was raining hard. There went my picnic. Two: Best friend or not, Declaration would not come over in the rain-she didn't like to get wet. There went my plans. Three: I didn't have a three, but if I thought about it long enough, I would.

Great-uncle Edisto extended a knobby hand to me and winced as he pulled me to my feet. He gave me my baseball cap, and I used both hands to pull it back onto my head.

"You're gettin' to be a big girl," he said. He picked up the newspaper, tucked his pencil behind his ear, and looked out at the downpour. His voice took on a thoughtful tone. "The rain serves us."

Great-uncle Edisto always talked like that. Everything, even death, served us, according to him. Everything had a grand purpose, and there was nothing amiss in the universe; it was our job to adjust to whatever came our way. I didn't get it.

"We can have us some deviled eggs and tuner-fish sandwiches right here in the kitchen, Comfort," he went on. "Or, we can try another day for that pic-a-nic."

When I didn't answer, he turned his head to find me. "What's the matter, honey?"

"So am I!" Great-uncle Edisto took a Snowberger's handkerchief out of his shirt pocket and mopped at his face. "I like to pic-a-nic more than a bee likes to bumble!"

While we straightened the table and chairs and cleaned up the spilled cereal, Great-uncle Edisto told me about how disappointments can be good things-like the time he thought he'd planted Abraham Lincoln tomato plants in the garden but found out later they were really Sunsweet cherry tomatoes. He'd had his heart set on sinking his teeth into those fat Abe Lincoln tomatoes, but then he discovered that he liked the Sunsweets even better-and besides, he could pop a whole Sunsweet into his mouth at once and save his front teeth some wear and tear. "A distinct advantage at my age," he said.

"That doesn't help my mood," I said. The rain pounded so hard on the tin roof, it made a roaring sound inside the kitchen and we had to shout to be heard.

"Think of disappointment as a happy little surprise, Comfort. For instance . . ." Great-uncle Edisto pushed his glasses up on his nose and smiled like he had just invented a new thought. "I think I'll get me a nap." He was breathing hard. "There's always something good to come out of disappointment, Comfort. You'll see."

I could tell by the rhythm and tone of his voice that he was working up to his grand finale: "Open your arms to life! Let it strut into your heart in all its messy glory!"

Uncle Edisto patted me on the shoulder and lumbered off to his room. I called Declaration on the kitchen telephone, but her line was busy. I hung up and waited for her to call me, but she didn't, so I tried dialing her six more times. Then I gave up.

Tidings slammed the downstairs doors on his way back outside, and Dismay came to find me. We went to my closet to wait for something good to happen. I do my best thinking in the closet. It's quiet and comfortable and smells like opportunity. I sat with my back against the wall and my knees under my chin. Dismay sat facing me (it's a big closet), with his paws touching my bare toes. He panted nervously and his dog saliva drip-drip-dripped onto my feet.

Dismay wasn't sure, but he smiled at me anyway, with those shiny dog eyes. It made me want to hug him, so I did. His tail thump-thump-thumped the floor.

Copyright © 2005 by Deborah Wiles. Excerpted with permission from Harcourt Books) 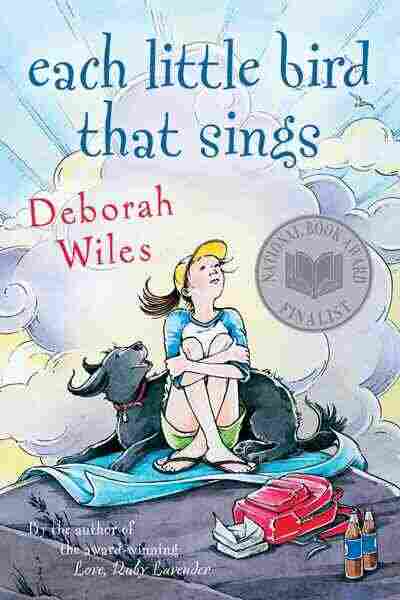