Accessibility links
Studying Robotics with a 'Roach Coach' California-Irvine grad student Garnet Hertz's robot design has a bug in the system. He uses a Madagascar hissing cockroach, poised on a tracking ball, to control a high-tech rover. Hertz explains his experiment.

California-Irvine grad student Garnet Hertz's robot design has a bug in the system. He uses a Madagascar hissing cockroach, poised on a tracking ball, to control a high-tech rover. Hertz explains his experiment. 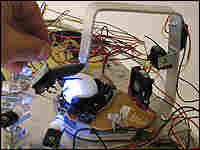 The roach moves a ping-pong ball to "navigate" the robot. hide caption

On the University of California, Irvine, campus, graduate student Garnet Hertz has been hard at work on a new robot design, but there's a bug in the system, literally. Hertz has Velcroed a Madagascar hissing cockroach over a modified track ball that allows the insect to control a high-tech robot rover. Garnet Hertz joins us on the line.

Mr. HERTZ: Well, initially I wanted to try to build a system that took the tasks that a computer would normally do and replace it with something that was alive and basically just sort of see what happens.

HANSEN: Yeah. So roach movements are ones that you wanted to kind of extrapolate and put onto the movement of a robot, make a robot move more like a roach?

Mr. HERTZ: Yeah, and this is actually something that researchers in the field of robotics are familiar with. Researchers in the field of robotics have for a while now really idealized the cockroach as a master navigator. So this is sort of taking that literally and trying to use an actual cockroach as opposed to maybe an abstracted model of a cockroach and apply it into the navigation of a robot.

HANSEN: So how do you get the cockroach to move so that then the robot will move?

Mr. HERTZ: Well, it's quite simple. The system operates with a track ball, which is like a mouse that you'd use on your computer, and as the cockroach walks on this ball, which is akin to a two-dimensional treadmill, sort of--as it walks, it translates that movement of this ball underneath its feet into the movement of motors. So as the bug scurries to the left, the robot scurries to the left as well.

HANSEN: So do you leave them in a dark room and then turn the light on and see what happens?

Mr. HERTZ: Well, the system has sensors that look out in front of it, and it operates on the principle that these cockroaches don't like light, and this sort of is carried off of the idea of walking into a kitchen at night and throwing on the lights and the cockroaches going running. So the system is designed with sensors around the front of it that, as the system approaches an obstacle, it shines a light toward the cockroach to divert the cockroach from crashing into a wall. And so essentially what you have is something like a virtual-reality system, really. It's sort of like this theater that this cockroach sits in with light shining around it.

HANSEN: What kind of practical use do you think is going to come out of this?

Mr. HERTZ: That's a good question. I'm still working on the system, and it's in the dreaded prototype phase. You know, maybe it's a fruitless effort to try to get me to have a cockroach accurately control a robot, but you know, it sure is a lot of fun, and it sure has got a lot of people's imaginations going and a lot of ideas flying and discussion into a whole wide variety of fields. So I think that's a good thing, too.

HANSEN: Garnet Hertz is a graduate student at the University of California, Irvine.

Thanks a lot. Good luck.

HANSEN: You can see pictures of the Roach Coach on our Web site, npr.org.

You're listening to WEEKEND EDITION from NPR News.

Hertz's 'Control and Communication in the Animal and the Machine'