Accessibility links
'Expanding the Hyphen' in 'War by Candlelight' Daniel Alarcon was born in Peru and raised in Alabama. His fiction reflects the cross pollination of those two cultures which he says is just a small part of a larger global trend of mobility and intermixing. His first book of stories in called War by Candlelight. Martha Woodroof of NPR station WMRA reports.

Listen
'Expanding the Hyphen' in 'War by Candlelight'

Daniel Alarcon was born in Peru and raised in Alabama. His fiction reflects the cross pollination of those two cultures which he says is just a small part of a larger global trend of mobility and intermixing. His first book of stories in called War by Candlelight. Martha Woodroof of NPR station WMRA reports. 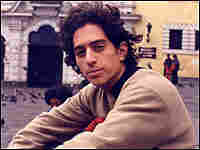 Daniel Alarcon's book is full of multi-cultural characters "on their way to somewhere else." hide caption

A new kind of storytelling is growing out of society's increased mobility. It's the literature of people who are always on their way to somewhere else, either mentally or physically. Daniel Alarcon is one of the new voices of this restless writing. His first book of short stories is called "War by Candlelight." Martha Woodroof from member station WMRA has this report.

Daniel Alarcon was three when his physician parents left Peru for jobs in Birmingham, Alabama. The family went back to Peru for frequent summer visits, but it wasn't until Alarcon won a Fulbright in 2001 that he spent time in Lima on his own. Alarcon taught school in one of Lima's rougher neighborhoods for a year. One of his students was called John Lennon Marino Yubanci(ph), a name that filled the author with astonishment.

Mr. DANIEL ALARCON (Author): To me, that name is shorthand for essentially the contemporary condition. I mean, you have Yubanci, which is an indigenous name, Marino, which is a Hispanic name, and John Lennon, which is, you know, the thoroughly globalized present moment.

WOODROOF: Alarcon remains amazed that cultures have cross-pollinated to the extent that this guy walks around every day and doesn't consider himself a symbol.

Mr. ALARCON: He lives his normal life, and that's his name. He just carries around all these identities like a floating banner behind him and it's totally normal. You know, it's just the people me who sit around and worry about these things. I think in this particular moment, it's just something we have to be aware of, that all these worlds and languages and stuff are colliding.

WOODROOF: Daniel Alarcon attends to his worries by writing. Some of the stories in "War by Candlelight" are set in Peru, some in New York, some in both, and not in the kinder, gentler districts of either one. Alarcon sees life as a process of constant internal and external movement. His characters are all between places, between friends, between lovers, between governments, between ideals.

Mr. ALARCON: This is from the title story, "War by Candlelight." This story kind of follows the life of a young man named Fernando as he makes the decision to be a political radical and a militant leftist. It's an interesting trajectory that a lot of people followed, and I've kind of wanted to examine the life of one particular man making this choice.

(Reading) `This is how Fernando came to Lima at age 17, wearing a brown sweater over a modest button-up with blue slacks and black shoes worn thin at the heels, riding that bus, seated in the back row with six others, a mishmash collection of souls on one or another of life's various errands: to buy, to sell, to visit, to marry, to find and, more than a few, to forget. Young people climbed onto the bus in the dead of night, leaving behind bankrupt and miserable villages of adobe houses and cold fields of cotton and maize. They carried a change of clothes, a picture, a little food, a plastic comb, a letter of introduction, a bag of coca leaves or a crucifix.'

WOODROOF: In this, his first book, Alarcon writes almost as an outsider, using what Harold Augenbraum, executive director of the National Book Foundation, calls a journalistic tone.

Mr. HAROLD AUGENBRAUM (Executive Director, National Book Foundation): There's a lot of observation of things that seem new to his eyes, that seem romantic to his eyes, as if he were going there and not part of the culture.

WOODROOF: Augenbraum says that Alarcon's approach to his subject matter keeps literary company with the likes of such cross-cultural authors as Francisco Goldman, Juno Diaz and Julia Alvarez. He says that Alarcon's work reflects a new hybrid immigrant culture born of 21st-century mobility.

Mr. AUGENBRAUM: He's neither Peruvian nor Anglo-American. He is somewhere in between, and that in-betweenness is where he's going to find his inspiration. In a sense, he doesn't really live in either place mentally, emotionally, intellectually, but he lives sliding along the hyphen of the two cultures.

WOODROOF: Daniel Alarcon suspects he's part of a literary wave that will increasingly reflect life on that hyphen, and he wants to invite American readers into that space.

Mr. ALARCON: The particular spaces that I'm describing are important, you know, because there are more places like Lima than there are like Birmingham, where I grew up, you know. There's more places in the world that resemble this chaotic and tumultuous Third World capital than there are, you know, Hoover, Alabama, where I was raised, which is a tranquil and altogether pleasant place to live.

WOODROOF: Daniel Alarcon is now hard at work on his first novel, which, he says, will be done `soonish.' No doubt in it, he will continue to expand the hyphen. For NPR News, I'm Martha Woodroof. 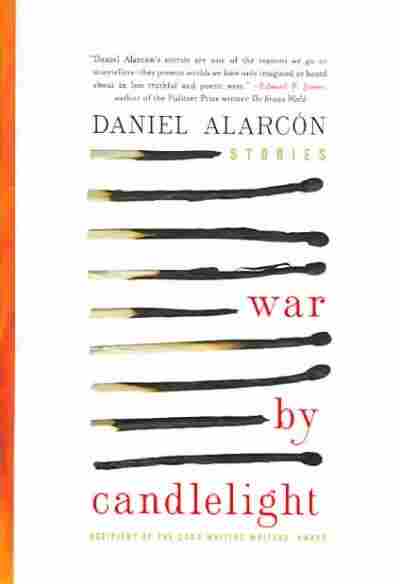