Accessibility links
Excerpt: 'Bindi Babes' "Of course we didn't want her," 12-year-old Amber Dhillon says of her Auntie, in this title from our list of summer book picks for kids. "We didn't need her."

Listen to an Audio Excerpt of 'Bindi Babes' 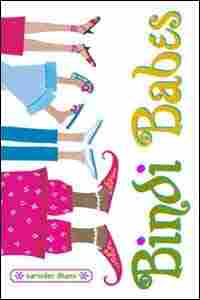 "Of course we didn't want her," 12-year-old Amber Dhillon says of her Auntie, in this title recommended by Washington Post columnist John Kelly. "We didn't need her." Auntie has come from India and into the London lives of Amber and her two sisters to correct the lax ways of the girls' widowed father, who accedes to every request of his daughters: from trendy sneakers to cool cell phones. But how to get rid of Auntie?

Excerpt: From Chapter One

Once upon a time there were three sisters called Geena, Amber and Jazz. I'm Amber, the best-looking and certainly most intelligent. When the other two have finished killing me, I'll tell you what happened to us.

Our story's got something of everything, just like a Bollywood movie. It's got singing, dancing, action, romance, a baddie and three beautiful heroines.

The story begins on the day my so-called friend, Kim, got stuck up a ladder. It was also the day our lives changed forever.

It begins at lunchtime. Lunchtime at Coppergate Secondary School was a take-your-life-in-your-hands kind of affair. The canteen was falling down, so it was always possible that a lump of plaster would drop from the ceiling into your apple pie and custard at any moment. To be honest, the whole of the lower school was falling down. The upper seniors had already moved into a state-of-the-art new building across the road, but we had to wait for the rest of it to be built.

"I'm getting new trainers," I told my friends Chelsea and Sharelle. We were sitting in the playground after lunch, giving the boys marks out of ten for looks and style.

"New trainers!" Sharelle shrieked. "If you tell me you're getting those silver Reeboks with the high-tech soles for smoother movement, laces guaranteed for life, I'm going to die."

Sharelle turned visibly green. It could have been the fish pie we had for lunch, but I didn't think so. I liked it when people were envious. It meant they weren't pitying me.

"You're so lucky, Amber Dhillon," Chelsea moaned. "You get everything you want."

"Not everything," I said meaningfully.

"Well, most things," Chelsea said hurriedly. "Has Geena got a new phone?"

Geena was across the playground, showing off her new mobile phone to her friends. The phone was so tiny, you could hardly see it from here. It was the latest model, and nobody else in school had one yet. Even the teachers kept eyeing it jealously.

"Oh, what is it now, Kim?" I asked irritably, without turning round. You know those people you are sort-of friends with because you can't be bothered to tell them not to bother? Kim and I are sort-of friends. Chelsea and Sharelle think she's a waste of space.

"Help me!" Kim wailed, shooting past us. I hadn't realized she could run so fast. Her skinny little arms and legs were pumping away like pistons.

Hot on her heels was George Botley, who's in our class.

"I think Botley is threatening to put a worm down Kim's back," Sharelle replied.

We watched George chase Kim over to the other side of the playground. Kim was shrieking hysterically and not looking where she was going. She plowed right through a group of Year 7 girls who were standing around chatting, scattering them right and left. From a distance, we could see the girls jumping up and down and shouting at her. One of them, my sister Jazz, stuck her foot out and sent George Botley rolling across the playground like a stuntman.

There are good and bad things about having sisters who are close to you in age. Geena's nearly fourteen, I'm twelve and Jazz is eleven. Geena always says that Mum and Dad liked her so much, they decided to have lots of babies close together, then they had me and Jazz and that was the start of the nightmare. It might have been funny once, a very long time ago.

At least we can borrow each other's clothes, even if we're different shapes and sizes. Geena's small and curvy with the kind of figure that makes boys walk into lampposts. I'm taller and skinnier, and Jazz is a mixture of the two. The three of us have dark hair and dark eyes, and in a strange way we all look like each other, and yet we don't. As if an incompetent Dr. Frankenstein tried to make three clones of one person, and didn't quite succeed.

But, obviously, it's a total disadvantage to be so close in age when you're trying to win an argument. Sharelle's seven-year-old brother, for instance, has no chance against her. One armlock, and it's all over before it's begun. On the other hand, our fights are often like the Hundred Years War. Long and bloody.

George was picking himself up and dusting himself down. I thought he might have a go at Geena, but he didn't, because she started fluttering her eyelashes at him. Geena flirts like she breathes, meaning all the time.

Kim was trying to hide behind the school flagpole, which was useless because bits of her were sticking out on either side. George spotted her immediately, and the chase was on again.

"He's got a funny way of showing it," I replied.

Sharelle grinned an evil grin. "He fancies Amber. I've seen him staring at her in math lessons."

"He was just trying to copy my answers," I said.

"Amber, did you see where Kim went?" Jazz was coming toward me, and she looked concerned. My sisters and I have this unspoken rule that we keep an eye on Kim because she's so totally useless. Brutal, but true. "She's gone round the back of the school."

The back of the lower school was out of bounds. The headmaster, Mr. Morgan, who hardly ever bothered to pop across the road from his plush new office, had sent a message to tell us so. There were builders working round there, trying to prop the school up so that it would last another few months before we all moved to the new site. It was quite likely that Kim would faint with sheer terror once she realized that she'd broken a school rule, so I thought it was time I intervened.

I sneaked round to the back of the school, while the dinner ladies weren't looking. Jazz, Chelsea, Sharelle and some of the others followed me to see what was going on. So did Geena and her mates. There were a few Year 9 boys having a sneaky ciggie round there, and they slunk off, trying not to cough. George was there too, grinning all over his face, but there was no sign of Kim.

"Where is she?" I asked sternly.

"Up there." George chuckled.

I looked skyward. The builders had left a very tall ladder propped against the wall, and Kim was clinging to the top of it, like a monkey to a tree.

"Kim!" I called, shading my eyes. "Come down, you idiot. And quick, before you get caught."

Kim opened and closed her mouth, but no words were coming out.

"Don't worry about Botley," I added. "He's not going to touch you."

"I gave George a shove, and he looked remarkably pleased. I was afraid that he did fancy me, which was a frightening thought. Meanwhile, more and more people were drifting round the corner of the building toward us. We were drawing a crowd.

"Kim, I promise you that George is not going to put a worm down your back," I said firmly.

"No, that's fear of open spaces," Geena replied authoritatively. "Fear of heights is acrophobia." She learned a whole list of phobias once, and then went round telling people that melissophobia was fear of bees, and peladophobia was fear of bald people. Jazz and I weren't sure if she'd made them up or not.

"Kim's got botleyphobia," George chortled, quite wittily for him. "That's fear of George."

Kim hung on even tighter, her skirt billowing in the breeze. "Can you see my knickers?" she called anxiously.

"Yes, we can," George said. "They're pink with white flowers."

The boys cheered. Kim's lip quivered. It was all getting out of hand.

"Kim, listen to me." I tried not to sound annoyed. "We'll all get into big trouble if we're caught here."

Kim was swaying slightly from side to side. "Amber, I'm having a panic attack," she yelped. "I can't breathe."

"Come on, Kim, we practiced this before," I reminded her. "Take a big breath. Now, breathe out slowly."

Geena nudged me. "We'd better do something, Amber."

"Here come the dinner ladies," Jazz added, as a posse of them rounded the corner and stood staring at us.

"Well, they're not going to be any use," I said. "What do you think we should do?" Jazz, Geena and I went into a sisterly huddle. Everyone else watched and waited.

"Maybe one of us should go up and get her," Geena suggested. "Before the dinner ladies start to panic."

The dinner ladies were panicking already. They were unable to decide what to do, and trying to hide behind each other. Finally, Mrs. Hubble, who was the bravest, shuffled forward.

"Now, Kim," she said in a quavering voice, "you come down from there this minute. And the rest of you, get back into the playground. You know you're not allowed round here."

Kim's the only person in the school who's scared of Mrs. Hubble, but still she didn't move. Neither did anyone else. Then the bell rang.

"There's the bell," Mrs. Hubble added hopelessly. "Off you all go."

Of course, everyone ignored her. They weren't going to miss a minute of this gripping drama. Instead, they all looked at me, Geena and Jazz. They were expecting us to sort this out. 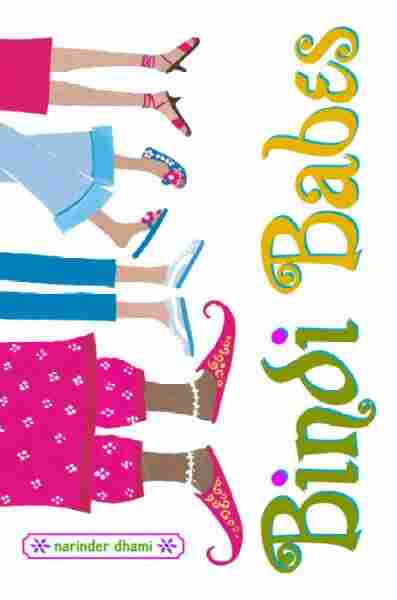