Accessibility links
Jackson Acquitted on Charges Michael Jackson has been declared innocent of child molestation by a California jury, ending a dramatic case that has drawn massive media coverage and interest from the pop singer's fans. 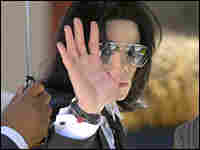 Michael Jackson waves to fans as he arrives at the Santa Barbara County Courthouse to hear the verdict read in his child molestation trial in Santa Maria, Calif. Reuters hide caption

Michael Jackson is acquitted of child molestation and nine other charges by a California jury. The verdict ends a dramatic case that has drawn massive media coverage and interest from the pop singer's fans.

The entertainer faced 10 criminal counts, from child molestation to conspiracy to commit child abduction, in the case involving a 13-year-old cancer survivor and his parents. Prosecutors had accused Jackson of subduing the young man with alcohol and seeking to hold his family at Neverland ranch; he was acquitted on both counts.

Jurors announced that they had reached a verdict early Monday, the seventh day of deliberations. The resolution ends 14 weeks of testimony and arguments. If Jackson had been convicted on all the charges, he would have faced a possible 20-year prison sentence.

Supporters of Jackson reacted with glee outside the Santa Barbara County Courthouse in Santa Maria, cheering and waving signs. The entertainer soon left in a motorcade to return to his ranch.