Accessibility links
Excerpt: 'The Travels of Benjamin of Tudela' More than a century before Marco Polo packed his bags, a Spanish Jew embarked on a 14-year journey through France, Italy, Greece and into the Middle East, told in this colorfully illustrated book. 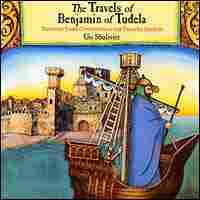 Cover image from The Travels of Benjamin of Tudela hide caption

More than a century before Marco Polo packed his bags, a Spanish Jew embarked on a 14-year journey through France, Italy, Greece and into the Middle East. The Caldecott-winning author and illustrator worked from the original Hebrew chronicle to create this eye-popping book, a recommendation from Washington Post columnist John Kelly.

A traveler hurries along a road that is barely visible. It is covered with thick layers of soil, stones, and broken branches. He pulls down his wide-brimmed hat to shield his eyes from the setting sun. From time to time, his feet sink in mud.

He is weary. But he must hurry. The road is long; the day is short. He must reach Tudela, a town in northern Spain, before the town gates are locked for the night. He tightens his grip on the large staff in his hand and walks faster.

He has arrived too late. The gates are shut. Small groups are gathered by the town walls. They must all now wait for the gates to open at dawn.

Some of the people have made fires to keep warm. The traveler collects wood, pulls flint stones from his large leather pouch, and sparks a fire. He takes out bread, cuts a piece of cheese with his knife, and has supper. He washes it down with water from his leather flask. Then he wraps himself in his long cloak and sits leaning against a rock, his staff next to him.

To sleep is dangerous. He may be attacked by wild beasts or by robbers. A night of sleep is short; a sleepless night is endless.

A line of people forms by the gates. When the traveler's turn comes, he shows the guards his papers. Then he pays the toll and enters Tudela.

The traveler heads toward the Jewish quarter. He negotiates his way through narrow, dirty streets. He is careful not to step on rotting garbage, dead rats and animal manure. The stench is strong. He walks close to the walls to avoid being showered by garbage and by the contents of the chamber pots that housemaids empty from windows.

He enters the synagogue. The old rabbi studies his face and gray beard and says, "Stranger, you remind me of a man I once knew. Who are you?"

Dear friends, says Benjamin, as most of you know, I'd always dreamed of seeing Jerusalem, and as many places mentioned in the Bible as possible. I could find no peace until my dreams became reality.

I know that when I decided to leave Tudela fourteen years ago, to abandon the comforts of home for the hardships and dangers of the unknown, some of you thought I'd gone mad. Do you remember how you tried to talk me out of going on a journey from which few ever return alive? Do you remember how some of you mourned me, as if I were already dead? True, some of you also wished you could join me.

Now you ask: Was my journey difficult? Yes, it was. Was it dangerous? Yes, very. In spite of it all, am I glad I went? Yes, I am.

If I told you of every place I've been to, of all I've seen -- the companions I've traveled with, the people I've met, or the lonely days; the exotic foods I've tasted, or the times I went hungry and cold; the soaking rains and burning suns, the beautiful sights and arid deserts -- my story would be almost as long as my journey.

So I'll tell you only about the most amazing places I saw and the most fascinating stories I heard.

THE TRAVELS OF BENJAMIN OF TUDELA: Through Three Continents in the Twelfth Century © 2005 by Uri Shulevitz. Used with the permission of Farrar, Straus and Giroux. 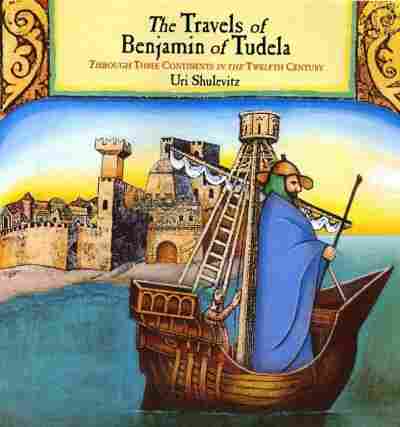 The Travels of Benjamin of Tudela

Through Three Continents in the Twelfth Century