Accessibility links
Excerpt: 'Summer Reading Is Killing Me!' Author Jon Scieszka is intent on producing books that are an antidote to the dusty titles that populate summer reading lists. Here, kid-lit characters come to life when a summer reading list from school is accidentally put inside a magic book.

Excerpt: 'Summer Reading Is Killing Me!'

Excerpt: 'Summer Reading Is Killing Me!' 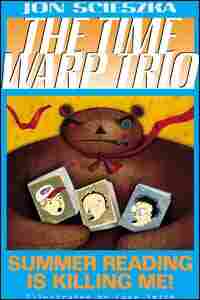 Cover image for Summer Reading Is Killing Me hide caption

The author is intent on producing books that are an antidote to the dusty titles that populate summer reading lists. In this installment of his Time Warp Trio series recommended by Washington Post columnist John Kelly, Sam, Fred and Joe encounter Curious George, Robinson Crusoe, the Headless Horseman and other kid-lit characters when their summer reading list from school is accidentally put inside a magic book.

"CLUCK, CLUCK," the thing rumbled in a deep voice.

"Is that thing talking to us?" said Fred.

I looked around the small playground. Fred, Sam, and I stood at one against a chain-link fence. A very large, white, feathered thing stood next to the swing set at the other end. It had yellow, scaly legs as big as baseball bats, little red eyes, and a dog collar.

Sam cleaned his glasses on his T-shirt and took another look at the other side of the playground.

"Yes, that is a two-hundred-fifty-pound chicken standing there."

The sun glittered in its hungry little eyes.

"And yes, he looks like he's planning to hurt us," added Sam.

"Excuse me, guys," said Sam. "Did you ever get the feeling that all of this has happened before, exactly like this?"

The super-size chicken eyed us. He gave another gut-rumbling "CLUCK."

"Well, except with maybe a black knight instead of a giant chicken, of course."

Fred pushed back his Red Wings hat and scratched his head. "Hey yeah. It's like 'a la mode' or something."

The chicken pecked the ground hungrily with jackhammer blows of its beak.

"You mean 'deja vu,'" said Sam, backing up against the fence. "And Joe, isn't this right about when you should do some magic trick and get us out of here?"

I stood there stunned, looking at a giant white chicken on a city playground. The swing set, the slide, the gravel, even the impossible chicken...

Sam was right. Everything did look familiar, but not really familiar. I couldn't put my finger on it.

"Uh, Joe. Joe?" said Sam, elbowing me in the ribs while keeping his eye on the hungry chicken.

The monster bird twisted its head. It looked us over with one eye, then the other.

"Well thank you for sharing your feelings," said Sam. "And you know we would just love to hear more...later. Right now it looks like that bird is thinking about his own idea of chicken dinner – us. So how about that magic trick?"

The killer fowl started bobbing and walking towards us.

Fred bounced his fist off the top of my head. "Yeah, come on, Joe. You are the worst magician I've ever known. Your Book got us into this. Do a real magic trick for once and get us out of here."

I racked my brain. There was no way I was going to try the classic "abracadabra" or "hocus pocus" magic words to stop a charging chicken. And don't even remind me of that "please" and "thank you" mistake I made earlier in my career. But I had a flash of an idea. I thought it could work. It just might work. So I gave it a try.

"Why did the chicken cross the road?" I yelled.

The chicken only flapped its wings and ran faster.

I cupped my hands like a megaphone and yelled punch lines: "To get to the other side. To buy the newspaper. To get away from Colonel Sanders. "

Nothing worked. The monster chicken just looked madder and ran at us faster.

"I don't want to end up as chicken feed," wailed Sam, plastered against the fence.

At that moment, I saw a sign out of the corner of my eye. And I knew where we were.

The chicken thundered toward us, its deadly sharp beak pointed directly towards us.

I stepped in front of Sam and Fred with my chest out. 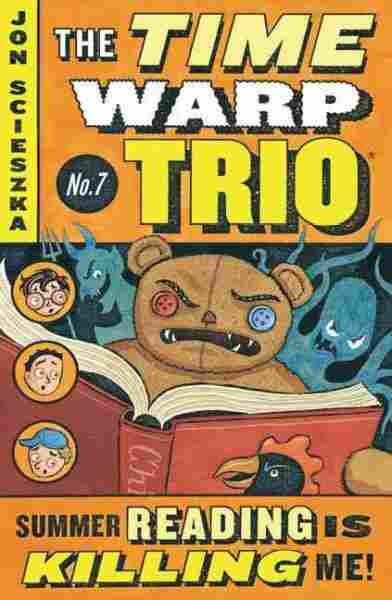 Summer Reading Is Killing Me