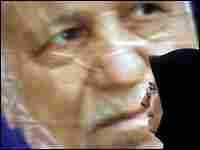 Ali Akbar Hashemi Rafsanjani – 71, former president of Iran from 1989 to 1997, speaker of Iran's parliament before that. Currently head of the Expediency Council, which adjudicates conflicts between the parliament and the Guardian Council. He is an ayatollah, but is viewed currently as a moderate, who favors lifting social restrictions, freeing the economy, and improving relations with the West. Rafsanjani toyed with the idea of running this time for president and kept his name in the media for weeks before he finally announced his candidacy in mid-May. He is considered the frontrunner.

Mostafa Moin – 54, considered the leader among reformist candidates. Moin was a minister of higher education and science in the government of President Mohammed Khatami. He resigned that position after police and vigilante groups beat up student demonstrators during widespread protests in 1999. Moin was at first disqualified as a candidate by the Guardian Council, but then reinstated under pressed from Ayatollah Khamenei. Moin's running mate for vice president is Mohammed Reza Khatami, the current president's brother. A woman is the public voice of his campaign.

Mohammad Bagher Qalibaf – 43, former national police chief of Iran, credited with improving the image of the police. A prominent conservative and apparent leader among conservative candidates. Also a former commander of the Revolutionary Guards. The youngest candidate in the race.

Mahdi Karroubi – 68, a moderate reformer. Was speaker of Iran's parliament from 2000 to 2004. A mid-ranking cleric, he does not favor giving a great deal of power to secular political forces. He has promised to give all Iranians over 18 a small monthly stipend in an effort to alleviate poverty.

Ali Larijani – 48, former head of Iranian state radio and television. A hard-line conservative, he has been a security adviser to Ayatollah Khamenei since last year. Was minister of culture and Islamic guidance when Rafsanjani was president. He has been critical of Iran's negotiations with the European Union over the nuclear issue.

Mahmoud Ahmadinejad – 49, ultra-conservative mayor of Tehran since 2003. Received some praise for efforts to alleviate traffic gridlock in Tehran. Closed many cultural centers set up by reformers. A former special forces officer in the Revolutionary Guards.

Mohsen Mehralizadeh – 49, a reformist-oriented vice president of Iran. Head of the National Sports Organization. He was also initially disqualified by the Guardian Council, then reinstated as a candidate under pressure from Ayatollah Khamenei.

Iranian voters go the polls Friday to choose a successor to outgoing president Mohamed Khatami. Pro-democracy activists have criticized the election because a council of clerics disqualified many potential candidates. But it shows signs of being the most tightly contested presidential race since the founding of the Islamic Republic more than a quarter-century ago.

The election is being watched for signs of how it might affect U.S.-Iranian relations, which continuing to be tense over Iran's nuclear activities.

Q: When does Iran's presidential election take place and who is running?

Iran's presidential election takes place June 17. Seven officially approved candidates are running. The current president, Mohammed Khatami, is finishing his second term, and Iran's constitution does not permit him to run for a third consecutive term.

Q: What does it mean to be "officially approved" as a presidential candidate?

Political parties are very weak in Iran, so in most cases individuals declare that they wish to run. This year more than 1,000 candidates entered the race.

The council was established to "safeguard Islamic rules and the constitution," according to Iran's official media guide. It also qualifies candidates for elections, including the presidential election. This year it initially qualified six candidates for president, all of them considered conservative.

Ayatollah Khamenei then criticized the council for failing to qualify any reform-oriented candidates. Consequently the Guardian Council added two reformers to the list, bringing the total of officially qualified candidates to eight. One of the conservative candidates withdrew from the race two days before the election.

Q: Why did Ayatollah Khamenei do this? Does it suggest he favors a reform-oriented candidate?

No. Far from it. Khamenei probably did this for both practical and political reasons.

Practically speaking, the conservative clerics who hold most of the power in Iran are greatly concerned about the turnout in the election. Iranians under 30 make up more than two-thirds of eligible voters, and they have become deeply alienated by the restrictions on social life in the Islamic Republic.

A low turnout could call into question the legitimacy of Iran's government, domestically and on the world stage.

Young Iranians voted overwhelmingly for President Khatami in 1997 and again in 2001. But they have been disappointed by his inability to deliver on promises for reforms. The conservative clerics blocked most of his initiatives over the years. Political disaffection has deepened among the young. If there were only conservative candidates to choose from, that would guarantee a low turnout.

Khamenei's decision thus encourages a larger turnout even if it risks the election of a reformer who might challenge his authority.

Q: And what are Khamenei's political reasons for widening the candidate choice?

Ayatollah Khamenei is very carefully watching the prospects of one candidate in particular: Ali Akbar Hashemi Rafsanjani, the favorite in this election. Rafsanjani was president from 1989 until 1997. He is one of Iran's best-known political figures and one of the richest.

Rafsanjani has said he would like to see the power of the clerics diminished, and relations improved between Iran and the United States. There is much talk in Iran that Khamenei did not approve of Rafsanjani's last-minute decision to enter the race.

Over the past eight years, Khamenei has seen his power grow at the expense of Iran's president. That trend could be reversed if Rafsanjani is elected to the office once again. A wider field of candidates -- including two prominent reformers -- could diminish Rafsanjani's chances.

Q: How exactly is power shared in Iran between the president and the supreme leader?

The leader is defined as the state's highest authority. The president is the head of government. The leader is the supreme commander of the armed forces. He also holds the reigns over the judiciary, the Guardian Council, state radio and television, and the Revolutionary Guards.

The leader is not elected directly by the public. He is chosen by an assembly of experts, comprising the religious leadership of Iran.

For most of President Khatami's two terms, reformers dominated the parliament, or Majlis. But together, the reformist forces were stymied by the actions of the leader and the various political bodies he controls.

Last year, a new parliament was elected, dominated this time by conservatives, after the Guardian Council disqualified more than 2,000 candidates for parliament. Most of them were reformers.

Ayatollah Khamenei and his conservative supporters are hoping that the election of a conservative president will complete their consolidation of all governmental power in Iran.

Q: Is it likely that a conservative will be elected president?

It's not really clear. This is probably the most closely contested presidential election in the history of the Islamic Republic.

Still, one of the reformers is polling second. He is Mostafa Moin, a former minister in President Khatami's government. The remaining candidates are trailing Moin and Rafsanjani.

If no single candidate receives more than 50 percent of the vote, there will be a runoff of the top two vote getters. The runoff election will probably take place on June 24. There has never been a presidential runoff election since the establishment of the Islamic Republic of Iran in 1980.

Q: How could this election affect relations with the United States?

With Iran it's always hard to predict. Nearly all the candidates, even the ultra-conservative, voice their willingness to improve relations with the United States. The U.S. remains popular among the general population in Iran.

But the conservatives always list conditions, which usually boil down to a demand that the U.S. treat Iran as an equal. What that means specifically is difficult to pin down.

Rafsanjani has said he wants to improve ties with the U.S. and so has Moin and the other reformers. But they might well face the same obstacles Khatami faced when he tried to improve relations with the U.S. during the Clinton administration.

President Clinton made it clear he was open to solving the problems between the U.S. and Iran, but the conservatives in Iran blocked any progress. They did not want Khatami and the reformers to get the credit for improving relations with Washington. Conservatives could very well strike the same posture if Rafsanjani or a reformer prevails.

As for the U.S., there is no indication so far that the Bush administration has any interest in real engagement or dialogue with the Iranian government, no matter who is elected.

Q: What about the effect of the election on the nuclear issue?

Iranian public opinion is solidly behind acquiring peaceful nuclear technology. Its government and society are deeply divided over the value of negotiations with the Europeans, which seek to limit Tehran's freedom to acquire nuclear technology that might lead to nuclear weapons. The government will still be divided after this presidential election. In the short run, Iran's position on the nuclear issue, and its stance in the negotiations, is not likely to differ much, whatever the outcome.

Q: And what about the wider implications for the direction of Iran's politics?

Iran's Islamic Republic has slowly but steadily become less rigid and restrictive over the last quarter-century. That has more to do with pressure from civil society than the electoral process. In this election campaign, all the candidates have had to loosen their style to appeal to the youth vote, which is the decisive factor. This process is likely to continue no matter who is elected.