Accessibility links
Excerpt: 'The Devil's Teeth' Author Susan Casey travels to the Farallon Islands to meet great white sharks and the biologists who study them. 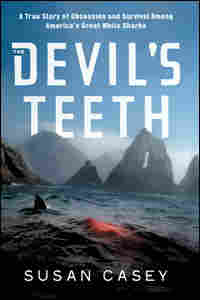 Get picks from bookseller Steven Bercu and others

Steve Bercu, Publisher's Weekly 2005 Bookseller of the Year and owner of BookPeople in Austin, Texas, on The Devil's Teeth: Author Susan Casey travels to the Farallon Islands to meet great white sharks and the biologists who study them. Compulsively readable, The Devil's Teeth manages to make the Farallon Islands and the scientists who live there as compelling as the awesome great white sharks who return to those waters year after year.

An Excerpt from The Devil's Teeth

Peter's weather prediction held. As the light came up and I stepped outside I saw that the fog had dissolved, the ocean was unveiled, and the jagged contours of another Farallon, Saddle Rock, were crisply in focus for the first time since my arrival. Saddle Rock reared out of the water only two hundred yards southeast of the main island, and from certain angles it looked exactly like a dorsal fin. Cormorants bunched along its edges, forming an elegant black picket fence. It marked the divide between Mirounga Bay (where the Rat Pack hunted) and Shubrick Point (where the Sisterhood reigned). Many an elephant seal head had been lost in its shadow.

Scot and Peter and I drank our coffee on the front steps, looking out at the water glimmering in the early light. There was a feathery wind and a handful of scudding clouds. The morning was hardly tranquil, though. The gulls screeched at top volume, as always. Surf boomed onto the rocks and the air was hazy with spray. Seabirds flew formation passes over the water, and every time they seemed to favor a particular spot I felt a little flash of hope -- was there a carcass out there? Peter seemed to have other things on his mind; he was eyeing a perfect eight-foot barrel wave that rolled along an area known as "Shark Alley." The wave, unsurprisingly, had never been ridden.

Not for lack of surfboards, though. There was a quiver in the supply shed at all times -- Scot used them as decoys to lure sharks to the surface for photo IDs. To a shark, apparently, a nice little six-foot swallowtail does a near-perfect imitation of a seal. When retrieved, the decoys were often missing hubcap-sized chunks from their sides, and surfers had taken to sending Scot their castoffs, hoping to repossess them after the sharks had paid a visit. Along with their research value, the strafed boards made for great conversation pieces.

According to Scot and Peter, the Queen Annihilator of Surfboards was a shark named Stumpy. Stumpy was nineteen feet long and weighed five thousand pounds, and when she was in residence, she ruled the Farallones. "She was the only shark that I think understood who we were, what we were trying to do," Peter recalled. "And she didn't care for it. When Scot was first putting out the decoys Stumpy would just come up and destroy them, more because she didn't like them than because she was fooled by their silhouettes." He turned to Scot. "Hey, it's an odd-numbered year. Stumpy could be here."

Stumpy patrolled a swath of sea along the east side of the island near the main boat launching spot at East Landing. For prey, this was not an advisable route onto shore. "No seal gets by her," Peter said. And while other sharks would take twenty minutes or more to consume their kills, Stumpy could polish off a five-hundred-pound elephant seal in three minutes flat. Though the distinctively cropped tail fin that earned Stumpy her name hadn't been spotted for several years, Scot and Peter still talked about her with a respect that bordered on awe. "Stumpy was a goddess, there's no other way to put it," Peter said, lowering his voice in reverence. One time, Scot rigged a video camera on the underside of a surfboard to determine which angle the sharks were coming from when they attacked. He set the video board adrift off East Landing. Right on cue, like some battle-hardened test pilot, Stumpy gave it everything she had. The resulting footage was stunning, all teeth and whitewater and violent smashing noises that brought to mind a subaquatic train wreck. It was the first time anyone had successfully filmed great white sharks underwater in California.

Stumpy made her movie debut in the BBC documentary I had seen, and won Scot an Emmy for cinematography. During the first furious hit the board snapped in two and shot into the air, and as the camera dispassionately recorded the wreckage, Stumpy resurfaced and gave the bobbling pieces a fierce backhand with her tail, before swimming off grumpily in search of real food.

None of this seemed like the best testimonial for the sport of surfing.

And yet everyone involved with the Shark Project surfed. In fact, Brown had actually been attacked by a shark while riding waves in Palm Beach last November. "Yup, I'm a statistic," he admitted the night before when I asked for details. "I wouldn't say I was attacked, though. It's more like I was bitten." By seventy-six teeth, to be exact. Waiting for a set, Brown had felt some pressure on his foot and looked down. All around him the water was red. Holy shit! Look at all that blood, he thought, not quite realizing it was his own. He never saw the shark, but after examining his wounds he concluded that it was a sand tiger, a spooky-looking, snaggletoothed shark that eats fish. And in the turbid Florida water, flashing white feet can look an awful lot like fish.

Peter grew up as a surf rat on the beaches of Oahu. Every day after school he'd run to grab his board, a hulking ten-footer that he'd bought for four dollars at a garage sale. (The deal might've had something to do with the board's sky-blue patina of lead-based paint, which would chip off and lodge under Peter's toenails.) Even as surfing gear improved and evolved over the years and his friends began to do flamboyant tricks on the new shortboards, Peter always preferred the big logs. Longboarding was more soulful, he felt, more in tune with the ocean. Whether other surfers agreed with these esoterics or not, there was at least one advantage to a larger board: It didn't look quite as much like a seal. (Boogie boards, apparently, were the worst.)

"I know exactly how I'd do it," Peter said now, gesturing toward the wave. "But to get into the water here . . ." His voice trailed off.

"Well, maybe you could try it in April," Scot said. Shark attacks in the spring were rare. Even so, he didn't sound too convinced. He had only recently taken up surfing, and was openly cautious about wave selection. With good reason. While the Farallones provided a convenient drive-thru for seal-hunting sharks, it was certainly not the only place around here where you'd think twice about getting on a surfboard. All of Northern California is sharky, so sharky that the area extending from Tomales Bay in West Marin County to the Farallones to Monterey is known as the "Red Triangle." More attacks by great whites had taken place in this pocket region than in all the other shark hot spots of the world -- combined. Close to home near Inverness, there were a handful of surf spots that Scot wouldn't even consider.

"North Beach and South Beach," he said. "I won't go there." These beaches were just north of the Point Reyes Lighthouse and featured nearby elephant seal colonies. Both areas had strong undertows and rogue riptides and wonderful ambush potential and, of course, seals, all of which add up to precisely the type of arrangement that great white sharks like. There was also an ominous place near the mouth of Tomales Bay called Shark Pit, where surfers had recently encountered three white sharks in a single day. Concerned, one of them asked Scot, What's going on? Had there been a sudden influx of seals? Was it the full moon? The red tide? The new yellow wetsuit someone was wearing?

"I don't surf where there are sharks," he emphasized to me now.

"You surf in Bolinas!" Peter said, with a snort. Bolinas was a tiny beach town, also in West Marin, that was only eighteen miles by boat from the Farallones. Sightings of healthy-size white sharks in the town's channel were not uncommon. Recently, a boogie boarder had been attacked there. In other words, Bolinas had plenty of sharks.

"Yeah, but I'm in water that's only up to my chest," Scot replied, laughing. "And I always have a buffer zone of about fifteen kids around me."

All this shark talk was making me impatient. Where were they? As if reading my mind, Scot suddenly stood up. "There's something going on down there," he said, pointing toward the wave. Even without binoculars I could see the black dorsal fin, it was that close to shore; any closer and the shark would be joining us for coffee. We watched for a moment as the fin carved a few tight circles like a figure skater diligently practicing and then disappeared into the surf.

"Yeaahhh, that's just one of them being weird," Scot said.

"Well, it could be a sea lion, though." Sea lion carcasses don't float like elephant seal carcasses. Thus, attacks on sea lions were much harder to spot. It was decided that we'd launch the whaler and take a look; even if there was nothing going on in Mirounga Bay, we'd be out on the water, that much closer to the action.

From the book The Devil's Teeth: A True Story of Obsession and Survival Among America's Great White Sharks, by Susan Casey. Copyright 2005 by Susan Casey Published by arrangement with Henry Holt. 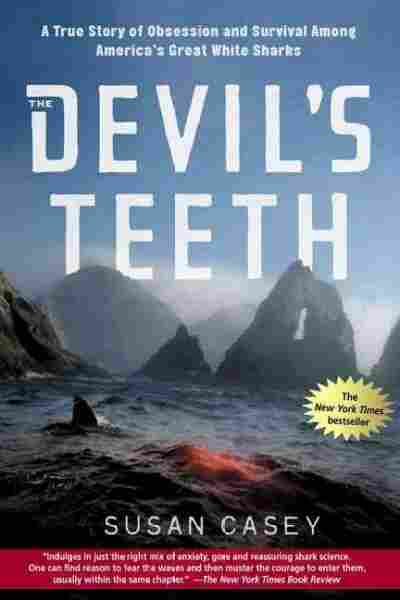