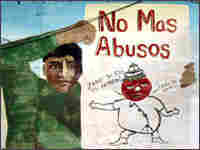 A mural outside the office of the Coalition of Immokalee Workers in Florida reads "No more abuses." Daniel Zwerdling, NPR hide caption 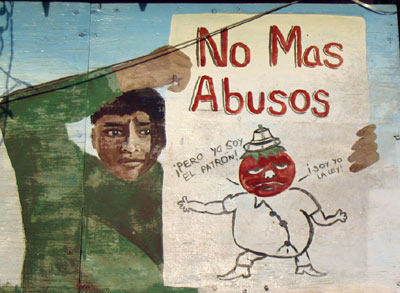 A mural outside the office of the Coalition of Immokalee Workers in Florida reads "No more abuses." 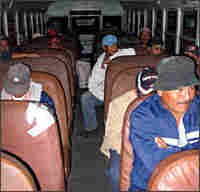 Before dawn, Immokalee farm workers wait on a bus that will take them to the tomato fields. Martina Castro, NPR hide caption 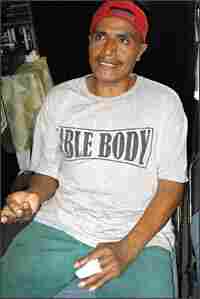 This tomato packer came to the coalition's office after his finger was cut off in a packing machine accident. He says the employer hasn't paid him the required worker's compensation. Coalition organizer Lucas Benitez says such injuries and compensation disputes are all too common during the packing season. 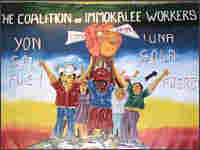 A poster on the wall of the coalition's office reminds farm workers that they are a "united force." Daniel Zwerdling, NPR hide caption 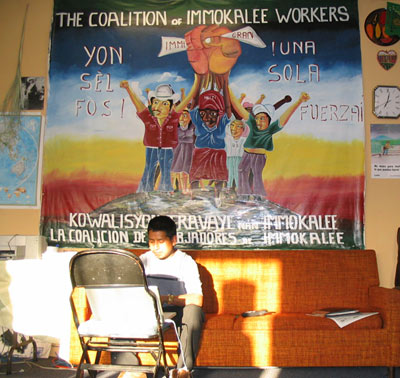 A poster on the wall of the coalition's office reminds farm workers that they are a "united force." 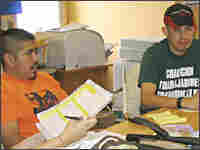 This spring, the Coalition of Immokalee Workers, a small farm laborers' group, won a surprising victory against the world's second-largest fast-food company.

After a four-year boycott, tomato pickers in Immokalee, Fla., got Yum Brands, the parent company of Taco Bell, to agree to pay them higher wages and -- perhaps more significantly -- to lead a push for more protections for migrant workers.

The deal calls for Taco Bell to buy tomatoes around Immokalee only from growers who pay farm workers almost double the current going wages. Taco Bell will pay growers more to cover the difference, without raising prices at its restaurants. If farm workers charge that growers are mistreating them, the company and farm workers' representatives will investigate. Taco Bell will stop buying from the growers involved unless abuses are corrected. Farm workers will also be allowed to inspect the company's confidential business records to ensure that Yum is adhering to the terms of the deal.

The average farm laborer in America makes less than $12,000 a year. Almost a third of migrant workers' families are officially poor. These workers often fail to receive the same legal rights and benefits granted to other U.S. laborers. The agreement with Yum Brands won't change that -- it will affect only a few thousand pickers around Immokalee, out of almost 2 million fieldworkers across the country.

But coalition leaders hope to expand their victory: They plan to press Yum Brands to adopt the new policies at their other fast-food companies, including KFC and Pizza Hut. The group has also asked McDonald's and Burger King to follow.

November 1960: CBS broadcasts the legendary documentary Harvest of Shame (reported by Edward R. Murrow and produced by David Lowe), which exposes the plight of farm workers around Immokalee, Fla. -- the same region where the Coalition of Immokalee Workers will eventually launch the Taco Bell boycott 41 years later.

Early 1990s: Farm workers from Haiti, Mexico, Guatemala and other countries start meeting at Immokalee's Our Lady of Guadeloupe Church to figure out how they can improve pay and working conditions on local farms.

November 1995: Hundreds of protesters crowd into a parking lot in downtown Immokalee where farm workers normally board buses every morning to go to the fields. The protesters convince most of the pickers to go on strike and to refuse to harvest tomatoes for five days.

Early 1996: A group of frustrated farm workers form the Coalition of Immokalee Workers.

December 1997: Members of the coalition refuse again to work in the fields. Some go on a hunger strike to demand better pay and working conditions; three don't eat for 30 days. Several major growers agree to raise the tomato pickers' wages 13-25 percent, the first major raise in decades.

1997-2000: Members of the coalition and others help federal agents investigate and prosecute employers who are forcing migrants to work in virtual slavery.

March 2000: The Coalition of Immokalee Workers organizes hundreds of farm workers to march from Ft. Myers to Orlando -- a 230-mile walk -- to attract publicity and demand still higher pay and better conditions.

April 1, 2001: The coalition launches a boycott against Taco Bell.

February 2002: The parent company of Taco Bell (formerly Tricon Global Restaurants Inc., now Yum Brands), reports that net profits surged 28 percent in the last quarter of 2001 -- "helped by strong expansion internationally" and rising sales at Taco Bell and its other chains, according to The Wall Street Journal.

May 2004: The United Methodist Church votes to support the Taco Bell boycott, joining the Presbyterian Church (U.S.A.) and National Council of Churches.

October 2004: The board at the University of California, Los Angeles that oversees food operations kicks Taco Bell off campus.

March 8, 2005: Executives of Yum Brands and the coalition's leaders announce reaching an agreement. The farm workers call off the boycott.

This story was produced by NPR's Martina Castro.