The former CEO of Tyco International, Dennis Kozlowski, and ex-finance chief Mark Swartz are convicted of improperly taking more than $600 million in corporate bonuses and loans from the industrial services company. 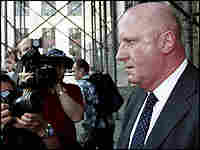 Take two of the Tyco trial ended today with two convictions. A jury found former CEO Dennis Kozlowski and former chief financial officer Mark Swartz guilty on 22 of the 23 charges against them. Among the counts: grand larceny, security fraud and falsifying business records. This was the second trial for Tyco's top executives. The first ended in a mistrial after one of the jurors received a threatening letter. Reporter Nancy Solomon joins us now from the courthouse in Manhattan.

And, Nancy, this jury had been out for 11 days. I understand some people there were beginning to wonder if they would ever even reach a verdict.

Yes, and I think the defense was counting on the jury not reaching a verdict. They had used their challenges during the jury selection process to kick almost every potential juror who had a college degree or had any business experience or Wall Street experience off the jury. So I think they were hoping that this case was just going to be too confusing for the jury, and they just wouldn't be able to come to a decision. They took a gamble that backfired on them, and the jury seemed very cool-headed and sure of themselves in reaching a guilty verdict in all but one count.

SIEGEL: In the first trial, there was one juror who emerged as a holdout for acquittal, and then the jury wound up deadlocked and a mistrial was eventually declared. I just wonder if there was anything especially different about the way the trial unfolded this time.

SOLOMON: Well, the prosecution slimmed their case down. They received a bunch of criticism after the mistrial that the case was too convoluted, that it was too long. It took six months to try. They were criticized for focusing on all the salacious details of what the defendants spent their money on, you know, the $6,000 shower curtain and so on. So they pared all that down, and I think they brought in one of their crack fraud prosecutors who--he just did a very good job of laying out the case. And he basically gave the jury, I would say, several credit hours' worth of an MBA...

SOLOMON: ...in teaching them what all this was really about and how to follow the paper trail, and that's precisely what they did. They asked for more than 100 documents during the deliberation. They listened to readback of testimony. They seemed to be working hard, and there seemed to be no acrimony that was certainly the biggest part of the story last time around. There was no holdout obviously. And the prosecutors also, I might add, in their challenges, they told me in personal conversations that they just focused on getting anyone that they feared might be a little crazy off of the jury. So if someone had too many cats, they used their challenge...

SOLOMON: ...or they just looked for things that they thought might get a holdout, and they seemed to have been successful.

SIEGEL: As more than a score of guilties were read off in the courtroom, could you see how Kozlowski and Swartz reacted?

SOLOMON: Well, these two men are about as cool of a cucumber kind of guys as I've ever seen. I mean, they sat there stone-faced, clearly not happy, but no visible reaction whatsoever. And really, they've been that way through the whole trial. They never show what's going on. They never display any kind of emotion. And their family members sitting behind them were pretty stoical, too. There were a few tears from Mark Swartz's mother, and then I couldn't quite tell if Kozlowski's wife, Karen, was crying, but they were very quiet and very stoical looking.

SIEGEL: Any statements from the defendants afterwards?

SOLOMON: They say they're very disappointed and that they're going to appeal, and they gave us sort of a prepared statement and rushed off, and they're not really saying much.

SIEGEL: That's reporter Nancy Solomon, who is covering the trial of the two former top executives of Tyco who were found guilty today.