Accessibility links
Love in New York: 'Heights' The final film from the Merchant-Ivory team deals with complicated relationships and social questions, long a fascination of the independent producers. But this is not a costume drama. It's a contemporary love story set in New York City.

The final film from the Merchant-Ivory team deals with complicated relationships and social questions, long a fascination of the independent producers. But this is not a costume drama. It's a contemporary love story set in New York City. 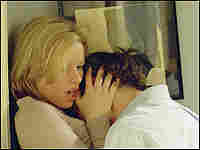 The new movie "Heights," opening today in New York and Los Angeles, is an adaptation of a three-character play by Amy Fox. On its way to the screen, it acquired a number of additional characters and plot lines, but Bob Mondello says one thing that was maintained was a connection with the stage.

"Heights" started out as a romantic triangle and ended up an octagon at least; people collide often enough to make New York seem a very small town for those who travel in the right circles. And those circles are definitely what Peter's plunging into when his Vanity Fair editor tells him how to frame an article about world-famous photographer Benjamin Stone.

Mr. JOHN LIGHT: (As Peter) Sorry. Benjamin wants me to call up all his exes?

Unidentified Woman #1: Yes, exactly. You look green. Can you get me some water, please.

Unidentified Woman #1: Thank you. Benjamin felt that he should be giving you the opportunity since you have been working on his memoirs and because you know him intimately. Now if you don't feel comfortable about the approach we're taking...

Mr. LIGHT: (As Peter) It's fine. It's very comfortable.

MONDELLO: But not necessarily for the folks he contacts; Jonathan, for instance, who is about to marry a pretty photographer named Isabel.

Ms. ELIZABETH BANKS: (As Isabel) There's a message on the machine at home about Benjamin Stone. Do you know him?

Mr. JAMES MARSDEN: (As Jonathan) Well, I took a class with him in London. He called?

Ms. BANKS: (As Isabel) You took a class with him?

Mr. MARSDEN: (As Jonathan) All right. I knew this was coming.

Ms. BANKS: (As Isabel) He sleeps with all his models, you know?

MONDELLO: Jonathan's actually aware of Peter. He's been dodging his calls all morning. Isabel, meanwhile, is dodging her mother, a Broadway diva who tends to act every moment of her life.

Ms. BANKS: (As Isabel) You are not speaking about Jonathan.

Ms. CLOSE: (As Diana) Why not? Why don't you ever talk to me about him, or is everything just so perfect that there's nothing to talk about?

Ms. BANKS: (As Isabel) No, Ma, it isn't perfect. I just think your perspective on relationships...

Ms. CLOSE: (As Diana) You know, I have learned a thing or two.

Ms. BANKS: (As Isabel) I should hope so.

MONDELLO: Few actors can turn on a heel with quite the authority Glenn Close brings to that gesture. She's Lady Macbeth wreaking havoc while projecting vulnerability. The rest of the cast is equally accomplished if not quite as famous, and director Chris Terrio and screenwriter Amy Fox orchestrate a creepy little round robin of betrayals for them. The film is both stagestruck, when dealing with Glenn Close's hypertheatricality, and what you might call stagebound, in the way it ties plot lines up so neatly that you can sometimes see things coming. Still, in a season when most of Hollywood is plumbing the depths of silliness, "Heights," as its title suggests, is aiming and reaching a little higher. I'm Bob Mondello.