Accessibility links
Zimbabwe Uproots Its Own Zimbabwe has launched a campaign to wipe out the country's shantytowns -- destroying thousands of homes and small businesses in the process. U.N. officials estimate the crackdown has left more than 200,000 people homeless.

Listen
Zimbabwe Uproots Its Own 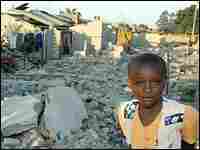 In the townships of the capital Harare, entire neighborhoods have been reduced to rubble. Locals call the police blitz "our own tsunami." hide caption

In Shona, the dominant local language, the crackdown is called "Murambatsvina." The government translates this as Operation Restore Order, but it can also be loosely translated as "drive out the rubbish." hide caption

The government of Zimbabwe has launched a campaign to wipe out the country's shantytowns -- destroying tens of thousands of homes and small businesses in the process.

President Robert Mugabe praised the operation as "a vigorous clean-up campaign to restore sanity and order" in Zimbabwe's cities. His political opponents say it's an effort to punish urban dwellers who voted against Mugabe in the most recent elections.

Residents say truckloads of police descended on their neighborhoods, declared all the buildings to be illegal and ordered the residents to tear down their own homes.

Entire markets in Harare have been bulldozed and burned in recent weeks. Opposition leaders say the crackdown is aimed at punishing areas which voted heavily against Mugabe in recent elections. They also suspect the government is trying to divert attention from the country's economic problems.

Just five years ago, Zimbabwe had a vibrant economy. Its farms produced enough grain and beef to feed much of Southern Africa. Now the country is in the midst of deep economic and social crisis. Inflation is rampant, and people wait for days in lines to get gasoline. Ever since the government launched a chaotic land reform program five years ago to redistribute white-owned farmland to blacks, millions of rural Zimbabweans have been dependent on international food aid to survive. Now, due to due to cleanup operation, hundreds of thousands of city dwellers are homeless.