Accessibility links
Can't Afford an Air Conditioner? Make One Living on a student's budget in sweltering heat led civil engineering student Geoff Milburn to a practical use of his education: creating an air conditioning system for under $25. Milburn tells Scott Simon about his invention. 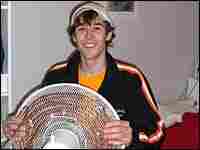 Geoff Milburn, a civil engineering student in Ontario, Canada, created a homemade cooling system based on a garbage can full of cold water and a fan. Geoff Milburn hide caption

Necessity is the mother of invention. So, apparently, is sweating: A college student's lack of air conditioning inspired him to figure out an inexpensive way to keep cool using a garbage can filled with ice water and an electric fan.

Geoff Milburn, a civil engineering student in Ontario, says his system can chill a room in 15-20 minutes and costs about $25 (Canadian) to produce. It works by conveying the ice water via copper tubing along the back of the fan, cooling the air in the process.

Milburn tells Scott Simon about his invention and offers a detailed how-to on his Web site. "I realise small air conditioners are quite cheap," he writes. "But then you don't get to build anything!"