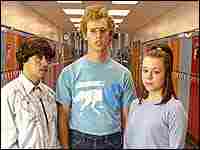 Scenes from the Movie

An Idaho state legislature resolution commending filmmakers Jared and Jerusha Hess captures some of the impact, reading in part:

WHEREAS, filmmaker Jared Hess is a native Idahoan who was educated in the Idaho public school system; and

WHEREAS, the Preston High School administration and staff, particularly the cafeteria staff, have enjoyed notoriety and worldwide attention; and

Preston seems to be taking the attention in stride and is planning to hold its first Napoleon Dynamite Festival on June 24 and 25. Contests, tours and appearances from bit players in the film are on the docket.

Scott Simon talks with Penny Christensen, a lifelong Preston resident and director of the town's chamber of commerce, about the event.