Accessibility links
Triangulating Comedy in 'Apres Vous' One man saves a stranger's life and gets caught in a love triangle. That's the gist of the French romantic comedy Apres Vous, which is now in U.S. theaters. It stars Daniel Autueil, one of the busiest actors in the world.

One man saves a stranger's life and gets caught in a love triangle. That's the gist of the French romantic comedy Apres Vous, which is now in U.S. theaters. It stars Daniel Autueil, one of the busiest actors in the world. 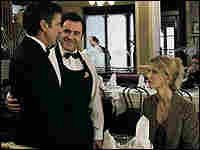 French film star Daniel Auteuil is one of the busiest actors anywhere. His comedy, "Apres vous," which opened last week in New York, was one of four films he released in 2003. Since then he's made eight more and has two others on the horizon. Here's Bob Mondello to tell us what Auteuil is up to in "Apres vous."

Antoine is a restaurant maitre d' in Paris, a job that keeps him both on his toes and perpetually late. When we meet him, played by Daniel Auteuil, he's late for dinner with his girlfriend when he sees someone else on his toes in a deserted park under a tree, atop a suitcase with a noose around his neck. sad sack Louis has decided to commit suicide.

MONDELLO: Antoine gets to him just in time, much to Louis' consternation.

MONDELLO: But now he's holding Louis up so he won't strangle. It's not a sustainable position and then...

MONDELLO: ...Antoine's phone rings. Timing is everything. Happily he manages to cut Louis down and with a little sweet-talking to get his girlfriend to let him add a third for dinner. Louis is painfully needy, but under Antoine's supervision his spirits are soon on the mend. Turns out he was distraught over an ex-girlfriend named Blanche, and Antoine figures if he can find her, he can maybe help Louis put his life back together. So he goes looking, with only a cut-out silhouette of Blanche to go by. He knows she works in a flower shop and finds a clerk in one who sort of resembles the silhouette. Must be her. Now to find out if she's still single.

MONDELLO: And a prettier woman who matches the silhouette comes out from the back of the shop.

MONDELLO: Much better, except that so he doesn't blow his cover, Antoine now ends up buying a whole wedding's worth of flowers. That's the setup for an amiable comedy built on charm in which Antoine keeps trying to help and keeps making things more complicated, whether getting Louis a job as a wine steward when he knows nothing about wine or sending such mixed signals to Blanche that, well, you'll see the plot twists coming, but the cast is having so much fun that that won't matter. Jose Garcia, who plays Louis, looks and sounds enough like Jeremy Piven that you can almost imagine the Hollywood remake already. This film is a throwback to the kind of French comedy that used to get remade all the time: "Cousin, cousine," "Three Men and a Baby." Lisa Kudrow could probably play Blanche, but it'll be trickier to replace Daniel Auteuil. His sweetness and perpetual perplexity are, like the fine French champagnes his restaurant serves in "Apres vous": uniquely effervescent.

LUDDEN: This is NPR News.