Accessibility links
Crab of Dual Gender Grabs Watermen's Attention David Johnson and Robert Watson have spent their lives on the Chesapeake Bay. In 27 years, they might have thought they had seen it all. Then, in late May, they pulled a half-male, half-female crab out of the water. David Johnson tells Liane Hansen about the rare find.

David Johnson and Robert Watson have spent their lives on the Chesapeake Bay. In 27 years, they might have thought they had seen it all. Then, in late May, they pulled a half-male, half-female crab out of the water. David Johnson tells Liane Hansen about the rare find.

A crab pulled from the Chesapeake Bay in May is a "bilateral gynandromorph." The right half is female, the left half male. Ashleigh Rhea/Virginia Institute of Marine Sciences hide caption 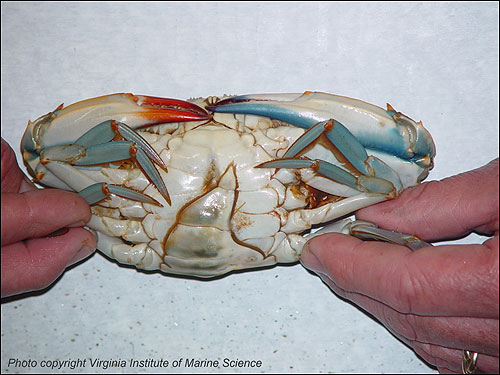 A crab pulled from the Chesapeake Bay in May is a "bilateral gynandromorph." The right half is female, the left half male.

David Johnson and Robert Watson have spent their lives on the water. For 27 years the two men have made their living pulling crabs from the Chesapeake Bay. They might have thought they had seen it all until late last month when they pulled a half male, half female crab from the Bay. David Johnson joins us from Deltaville, Virginia.

HANSEN: Jimmy is the male and sook is the female.

Mr. JOHNSON: Correct. And Robbie is the one that actually culls through the crabs, separates them, males and females, and he handed it to me and said, `What should I do with this?' Well, I looked at it and turned it over and saw that underneath of the crab it also was half male and half female. So I said, `Well, I'm gonna put it in its own special basket,' and we took it up in the front of the boat and I went ahead and set it in a basket by itself and put a wet grass sack over it, and that keeps them alive.

HANSEN: So in addition to the claws, the undersides were different. I guess the male looks kind of like the Washington Monument and the female looks like the Capitol Dome. And this one had both?

Mr. JOHNSON: This one had both.

HANSEN: Yeah, but didn't you want to know, I mean, what this crab was? I mean, you didn't really know if it was male or female. It seemed both. Did you, like, maybe, just take a female in and throw it in with it and see what happens?

Mr. JOHNSON: Well, my wife, Tammy, came up with that idea. She said, `Well, let's just put a female peeler in there and see what he does.' And at first the crab clutched it like a male Jimmy would do. They hold it underneath of them, waiting for the crab to shed, and that's when they mate. And that night the crab was clutching when she went to bed, and when I got up the next morning, the peeler had already shed into a soft crab, but the crab we'll call Jerry, ate half of it.

Mr. JOHNSON: Well, Jerry Springer, after the famous talk host. We all like Jerry.

HANSEN: Yeah, but why'd you pick that name out of all of the others?

Mr. JOHNSON: Well, one thing, Jerry is--can be both male and female name. So that kind of fit right there, and the Springer part is--there are some different things on "The Jerry Springer Show," and this crab was definitely different.

HANSEN: You bet. Waterman David Johnson--and he spoke to us from Deltaville, Virginia.

David, thank you very much.

HANSEN: You're listening to WEEKEND EDITION from NPR News.

More on the He-She Crab