Accessibility links
Finding Faith Along America's Highways Religion professor Timothy Beal piles his family into a motor home and hits the highway on a tour of religious attractions in the American South. Beal documents his journey in the book, Roadside Religion. 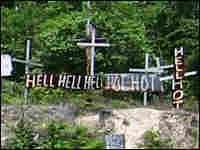 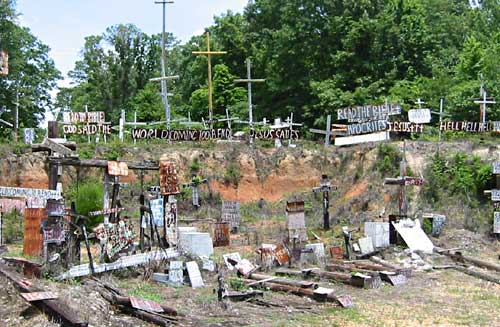 Makeshift wooden crosses offer warnings for sinners in Cross Garden, an 11-acre collage of crosses and junked appliances in Prattville, Ala. 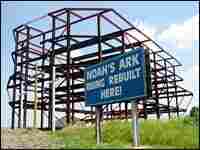 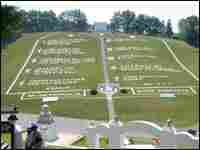 The World's Largest Ten Commandments, written in five-foot-tall concrete letters on the side of a mountain in Murphy, N.C. Timothy Beal hide caption 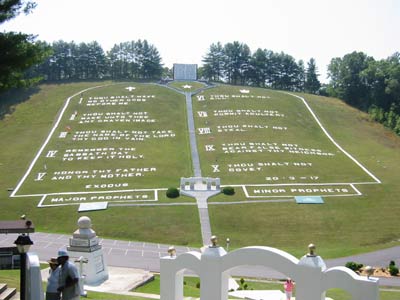 The World's Largest Ten Commandments, written in five-foot-tall concrete letters on the side of a mountain in Murphy, N.C.

A few years ago, Case Western Reserve University religion professor Timothy Beal piled his family into a motor home and hit the highway on a tour of religious attractions in the American South. Beal documents his journey in a new book, Roadside Religion. He speaks with NPR's Michele Norris.

Read an excerpt from the book:

Our twenty-nine-foot rented motor home rested precariously on the shoulder of a county road in the low rolling hills of southern Alabama, just outside the town of Prattville. It was midday mid-June, and the sun was beating down through a cloudless sky. The view from the motor home's "family-room" window: thousands of makeshift wooden crosses leaning this way and that. Some were only a couple feet high, hastily slapped together from scrap wood. Others, towering from a crumbling bluff above the road, were taller than telephone poles. Most of them bore messages, brushed on in red or black or white capital letters:

Among the crosses were scrap wood and rusty metal boxes bearing similar proclamations and warnings:

GOD SAID THE WORLD COMING TOO A END

In the ditch near our motor home, a rust brown fridge leaned back in the brush as if better to display its message:

IN HELL FROM SEX SEX

A few yards farther up the road, a makeshift row of old metal housings from air-conditioning window units lined a dirt driveway like junkyard luminarias, each cleverly conveying a message with a refrigeration theme:

TOO LATE IN HELL FIRE WATER

These AC luminarias led the way to the tiny ranch-style home of Bill and Marzell Rice, creators and proprietors of this eleven-acre collage of shouting crosses and junked appliances that they call Cross Garden.

My wife, Clover, and our two kids, Sophie, eleven, and Seth, seven, had decided to wait in the motor home while I talked with Bill and Marzell about their unusual horticulture. I had been in the house with them for a couple hours, and as Clover told me later, the motor home's air conditioner, powered by a gas generator, had begun to fail in the midday Alabama heat. The propane-operated fridge wasn't staying cold, and the hot dogs and fruit inside were beginning to compost. What's more, the water supply had run out. That was my fault. In our rush to leave Atlanta that morning, I had neglected to refill the water tank.

Sophie was relaxing on the bed, her belly full of Cocoa Puffs. Clover sat on the couch, trying to avoid the view of Cross Garden, flipping distractedly through the pages of a picture book she'd been reading with Seth. Seth had taken a break from reading to go to the "bathroom," a tiny toileted closet just big enough to sit down, stand up, and turn around in. Forgetting that the water tank was empty, he pressed the "flush" button. Clover heard the sputtering and whirring of the electric pump as it strained to draw the last drops from the tank. Then she heard Seth's bloodcurdling cry, "Help! Mom! It's spraying at me!" She looked up from the book and out the window. HELL IS HOT HOT HOT. So it is. And there was my family, parked on the shoulder of what appeared to be one of its innermost circles.

How did we get there?

Although we'd been on the road for less than two weeks at that point, our voyage into the strange and sometimes wonderful religious worlds of roadside America had really begun several months earlier, on another road trip. We were driving from DC to Cleveland through the Appalachian Highlands of northwestern Maryland on Interstate 68. As we crested a rolling hill just outside the quaint old town of Frostburg, we saw what initially looked like a steel girder framework for a four-floor parking garage standing alone in a grassy field about fifty yards from the highway. In front of it was a large blue sign:

A multilevel parking garage in such a place as this would have been unusual enough. But Noah's Ark? We whizzed past the Ark-in-progress that day, but I knew I'd be back to learn more about this project and its nowaday Noah.

I started keeping a list of roadside religious attractions throughout the country. Soon that list had become an itinerary for a new research project, a roadside approach to discovering religion in America. Six months later, in the summer of 2002, I loaded my family into a rented motor home and hit the rural highways of the Bible Belt on an initial voyage that included visits to places like Golgotha Fun Park, the World's Largest Ten Commandments, Paradise Gardens, Ave Maria Grotto, Holy Land USA and, yes, Cross Garden. Over the next year, I made pilgrimages to many other roadside religious attractions throughout the United States, from the World's Largest Rosary Collection in Skamania County, Washington, to Precious Moments Inspiration Park in Carthage, Missouri, to The Holy Land Experience in Orlando, Florida. I took notes, took pictures, took video, talked with the creators, talked with visitors, talked with Clover and the kids. In the course of these travels in the novel, often strange, sometimes disturbing worlds of roadside religion, I not only discovered new dimensions of the American religious landscape, but I also discovered new religious dimensions of my family and myself. Indeed, what began as a research agenda, albeit a novel one, has become a much more personal, dare I say religious project, as much about my own complex, often ambivalent, relationship to the life of faith as it is about the places and people visited.

If you've logged more than a hundred miles of rural American highway in your life, you've probably seen the signs for religious attractions, beckoning you to get off at the next exit and experience whatever it is for yourself: the world's tallest Jesus or teariest Blessed Virgin Mary, replicas of the Wilderness Tabernacle or empty tomb, re-creations of Jerusalem, Rome, paradise, hell. When you drive by such outrageous religious spectacles, your first reaction is likely to be "What?!?," blurted out in a burst of laughter. But if you let the place linger in your mind a little longer than it takes to disappear in your rearview mirror, other more interesting questions arise. Questions like "Who?" Who did this? Who has the chutzpah in this day and age to do something like that on the side of a road? And why? What drives such a person? What desires? What visions? What spirits or demons, entrepreneurial and otherwise? In other words, you want to understand. You want to know, What's the story?

That's what this book is about. Each chapter focuses on one particular attraction, telling the story of my visit there in words and pictures, reflecting on the meaning of the place as an expression of religious imagination and experience. In each case, I want to discover not only what it is, but who is behind it and why they did it. I want to discover what the story is. Although there's much humor and novelty to enjoy in the stories I tell about these places and the people who create them, I take care to avoid the temptation to make fun or condescend. I want to take these places seriously as unique expressions of religious imagination and unique testimonials to the varieties of religious experience in America.

Granted, this is not the usual approach to studying religion. The usual approach involves delving into a religious tradition's normative scriptures and doctrines, or focusing on established religious institutions and ritual practices. That's not what I'm doing here. On the contrary, I'm focusing on places that most people -- religious people and religion scholars alike -- would consider aberrant forms of religious expression. Although many of these places draw inspiration from the Bible, for example, their uses of it are far from normative or illustrative of the ways biblical interpretation functions within any religious mainstream. Few would consider writing the Ten Commandments in five-foot-tall concrete letters on the side of a mountain, or using miniature golf to tell the story of creation, or fabricating Noah's Ark from steel girders, to be exemplary biblical interpretation. These places are not likely to appear as illustrations in the next edition of Huston Smith's bestselling textbook, The World's Religions. And yet, beyond the sheer novelty of such excursions beyond the mainstreams of religious life, I find that these places reveal much about the American religious landscape. Indeed, I believe that religion is often most fascinating, and most revealing, where it's least expected.

In the art world, "outsider art" generally refers to the work of artists without formal training who stand outside the cultural norms of "fine art" schools, museums, and galleries. Bearing little or no relation to trends and developments in contemporary artistic techniques and subjects, outsider art, or art brut, was identified by its earliest appreciators especially with children and adults who suffered from mental illnesses that isolated them from mainstream ways of seeing and artistic expression. While the term has expanded to include the works of many who operate outside the formal institutions and values of the professional art world, and while new terms have been coined to indicate important nuances (e.g. "self-taught" and "vernacular"), outsider art continues to be appreciated above all as a form of creativity that finds expression on the social and conceptual fringes of experience.

In a similar sense, I suggest we think of these roadside religious spectacles as works of "outsider religion." Just as the highly individual works of outsider art can often powerfully reveal the breadth and depth of human creativity and imagination in very local, particular forms, so the places explored in this book can reveal the breadth and depth of human religious experience and expression. Paradoxically, it is precisely in their marginality that they open avenues for exploring themes and issues that are central to American religious life, such as pilgrimage, the nostalgia for lost origins, the desire to recreate sacred time and space, creativity as religious devotion, apocalypticism, spectacle, exile, and the relation between religious vision and social marginality. So "outsider religion" becomes a way of illuminating "insider religion." 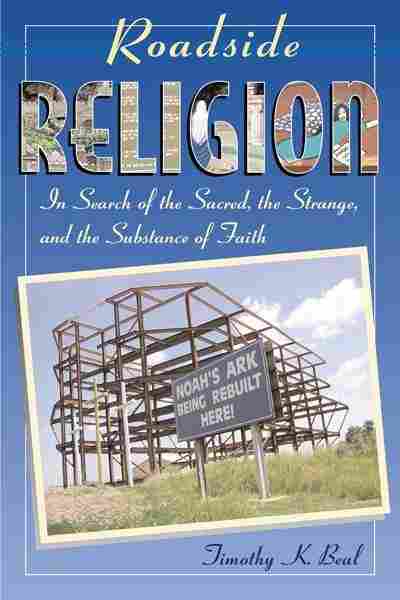 In Search Of The Sacred, The Strange, And The Substance Of Faith

Title
Roadside Religion
Subtitle
In Search Of The Sacred, The Strange, And The Substance Of Faith
Author
Timothy K. Beal