Accessibility links
Trading in Retirement for Undergraduate Study Although college campuses today are still dominated by 18 to 22 year olds, the number of older undergraduates has grown sharply in the past several decades. Today, roughly one in 10 students enrolled in bachelor degree programs are 30 years old or older.

Trading in Retirement for Undergraduate Study

Trading in Retirement for Undergraduate Study 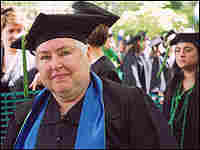 For the past several years, Linda Knight has been absorbed in the typical college experiences: cramming for all-nighters; eating greasy pizza in campus dining halls; unwinding Friday nights with a few beers. She gave the online college dating service a hopeful go, and slid down a 30-foot snow-covered hill on a food tray, a long-honored tradition at her college.

But there is one obvious distinction between Knight and most of her graduating cap-and-gown clad classmates at Wellesley College in Massachusetts. She is a retired deputy sheriff from Colorado, a grandmother of two and age 64.

"It was like the educational equivalent of Marine boot camp, but worth it," said Knight after receiving her diploma on June 3.

As distinctive as her white hair is in a sea of youth, Knight is far from alone. Although college campuses today are still dominated by 18 to 22 year olds, the number of older undergraduates has grown sharply in the past several decades. Today, roughly one in 10 students enrolled in bachelor degree programs are 30 years old or older.

The reasons for this growth in mature matriculation are complex. In today's information economy, many workers discover they need a bachelor's degree for entry-level white-collar jobs. Others want to change careers, enrich their lives or pursue a degree that they had set aside because of illness or addiction.

The aging of the population and the precariousness of Social Security and many pension plans have also prompted some retirees to return to college to stay active in their senior years or ensure they will not be impoverished in old age.

Knight put her college education aside after she married, had a family and went to work. After her children grew up and her husband died, she discovered she needed a goal in retirement. But there was something more personal. "My mother was very disappointed I didn't finish college," Knight said. "I always felt guilty."

Her two-and-half years at Wellesley, one of the nation's most prestigious colleges, were filled with trying moments. Many students ignored her the first several weeks of class, until they understood she wasn't a local retiree taking classes for fun. She struggled with learning a foreign language, as do many people beyond their middle-aged years. Carrying a backpack across Wellesley's hilly campus worsened her arthritis, and the stress of schoolwork prompted her to double her blood pressure medication.

Knight's case illustrates the difficulties encountered by returning students who have postponed getting a bachelor's degree for a long period of time. As they enroll in colleges across the country, many older students -- like their younger counterparts -- face going deep into debt. At the same time, many are also maintaining a job, keeping up their studies, and raising a family at the same time.

Not finishing school a second time is always a concern for these returnees, although figures on how many actually leave again are difficult to find. At times, the stress of college seemed too much for Knight, but she said, "I wouldn't quit, because I finish what I start and I didn't want my children to see me quit."

At Wellesley College, which has a Davis Scholar program for students over the age of 24 that enables them to get the same degree as traditional-age students, Tracy Tully, the coordinator of Continuing Education, said the college seeks to provide a strong support system to help older students handle the hardships.

"These obstacles include isolation from prior support systems, financial hardship, the need to care for aging parents or children, and difficulties coping with the high level of expectation and stress associated with a rigorous academic program," she said.

Sometimes families initially supportive of a family member returning to college become less so as study time interferes with running a household, Tully said. She said some family members might say, "Mom isn't just a mom anymore. She's a college student with her college sticker on the rear windshield."

Carol Kasworm, a professor in Adult & Community College Education at North Carolina State University, said older undergraduates who are parents often encounter financial difficulties, as they simultaneously try to manage a household and a grade point average. "They face choices like, 'Am I going to pay for my tuition or be able to put the money in a special summer camp for my child?'" Kasworm said.

Then there is the issue of who can watch your child while you're sitting in class perusing the intricacies of Euclid. Carole Fungaroli Sargent, a Georgetown University professor who wrote a book on older students, said the childcare issue is especially tragic because it hampers so many adults and can be easily alleviated.

"Given the open facilities of most universities and the readily available pool of undergraduates eager to work with kids, campuses can handle it the way churches and synagogues have for ages. Put one person and charge and rotate the duties," she said.

Anxiety is often high among older students during their first term, as they develop a fear that they might not be able to keep up with 18-to-22 year olds, Tully said. Yet, education experts say that many older students go back more mature and with a stronger drive to succeed that in many respects gives them an edge over younger students.

Knight says she often felt like she was at advantage in a high-pressure college climate, because she was able to call on her life experiences and observation of criminal behavior to analyze subjects like moral philosophy. Plus, she didn't have to contend with the typical distractions that derail many a college career -- excessive partying, romantic entanglements and skipping classes.

Yet even students who excel find that they can still face age discrimination, sneers from recruiters and exclusions from educational opportunities. For example, some of the most prestigious post-graduate scholarships, including the Rhodes, Mitchell and Luce Scholarships, have age restrictions.

Asked why the Rhodes Scholarship program doesn't accept students over 23, the program's American secretary, Elliot F. Gerson, said it no longer makes sense. "I've asked the trustees to change it," he said.

Despite the obstacles, students who persevere through the family chaos, initial awkwardness and stress are heavily rewarded. Statistics show that college graduates can earn as much as 70 percent more than people without a degree. Knight, who plans to do volunteer work in Colorado, watched her Davis scholar colleagues go on to such endeavors as Yale graduate school and a community development position on Long Island.

There have been previous influxes of older students on American college campuses. After World War II, the GI Bill allowed returning soldiers to go back to school after years of military service. In the 1800s, some colleges catered to adults needing skills for the industrial workforce. What has changed in the past several decades is the sheer size of the population, and the number of programs and colleges available to older students.

The options for older undergraduates range from age-integrated programs like Wellesley's to online degree programs where people can get their BA through chat rooms and e-mail. As for-profit institutions engage in extensive marketing to attract students, Sargent said older students should carefully evaluate the quality of these programs.

Her advice to students is to make sure a program is accredited, investigate where its graduates go, and not assume that any college is out of reach. She says, "Ask, ask, ask, especially at your dream campuses. For example, Georgetown University, where I teach, has a wide variety of offerings for adult students, and many creative ways to afford the tuition. But I know smart adults who automatically look elsewhere because the advertising has trained them to do so."

As for Knight, she has two words of advice for those thinking of going back to school: "Do it." She no longer harbors the guilt over not finishing college that had been with her for so many years, and she came away with a network of friends ranging in age from 18 to 80.

And she says the diversity of her college experience changed her. "I'm more accepting of people who are different," she said. "I accept people more for who they are."