Accessibility links
Searching Out Mayhem with Video 'Nightcrawlers' Teams of videographers, armed with cameras and police scanners, prowl the nocturnal Los Angeles metro area every night. Each siren wail could be the sound of their next windfall -- but the chaos they capture on tape has critics calling them vultures, or worse. 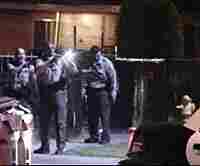 May 9, 2005: After shooting at least 120 bullets into a suspect's car, police and sheriff's deputies approach the car with weapons drawn. On Scene Video hide caption 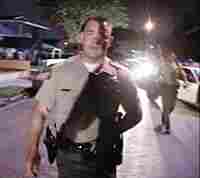 Those local stations have their own staff of cameramen and reporters, but they rarely work into the wee hours of the morning. That's where "stringers" come in -- motley crews with names like On Scene Video, Street Heat and Night Hawks.

The shooters, armed with cameras and police scanners, prowl the nocturnal Los Angeles metro area. Each siren wail or 911 call could be the sound of their next windfall -- a choice piece of videotape can earn the shooter up to $10,000 in a single night -- but it's also a dangerous way to make a living.

There's also the gore factor. The trade puts higher value on human tragedy -- the more chaos and mayhem, the bigger the paycheck. That earns the videographers names like "vultures," "nightcrawlers" and worse.

But the video crews say the anger is misdirected. They aren't causing the chaos, they're just documenting it.