Accessibility links
Excerpt: 'Meet You In Hell' Set in America's gilded age at the end of the 1800s, this book details the soured friendship between Andrew Carnegie and Henry Clay Frick. From their competition over collecting art to various steel strikes, the book depicts history without ever reading like a dry textbook.

Excerpt: 'Meet You In Hell'

Excerpt: 'Meet You In Hell' 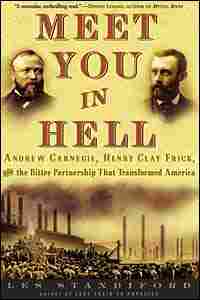 Cover image from Meet You in Hell hide caption

Get more suggestions from independent booksellers.

Set in America's gilded age at the end of the 1800s, this is the tale of the friendship between Andrew Carnegie and Henry Clay Frick. The two once worked together but had a falling out. On his deathbed, Carnegie askes to speak with Frick, who responds with a note that reads, "Tell him I'll see him in hell." Rona Brinlee of The Book Mark in Atlantic Beach, Florida, says the book is anything but dry: "In dramatic fashion, it follows the relationship of the two men, including their competition over collecting art and various steel strikes."

On a late spring day in 1919, so the story goes, only weeks before the Treaty of Versailles put an end to a war that had threatened the very fabric of civilization, one of America's wealthiest men—his holdings valued at more than $100 billion in today's dollars—sat up in his sickbed in his Manhattan home and called to one of his caregivers for a pen and paper.

Andrew Carnegie, eighty-three, once the mightiest industrialist in all the world, now a wizened and influenza-ravaged man who for nearly two years had been under doctors' care in his block-long, six-level mansion on Gotham's Millionaire's Row, took up the instruments brought to him and began to write as if possessed. When he was finished, he summoned to his chambers his longtime personal secretary James Bridge, the man who had helped him write Triumphant Democracy, one of the most persuasive tracts ever written in the cause of fair treatment of labor, all the more compelling for its author's position as a titan of industry.

"Take this to Frick," Carnegie said as he handed the letter to his old confidant.

It would have been enough to snap Bridge upright. Surprise enough to hear Carnegie mention that name, much less hand over a letter to that person. True, Henry Clay Frick was a fellow giant of industry—recently dubbed one of America's leading financiers by the New York Times—and he and Andrew Carnegie had been partners once. Frick had been the man Carnegie trusted above all others to manage the affairs of Carnegie Steel, a manufacturing combine so vast that its output surpassed that of the entire British Empire.

But, so far as anyone knew, the two men had not exchanged a word in nearly twenty years—not since Carnegie drove Frick out of the business and Frick successfully pressed a monumental lawsuit against his former partner, the first in a long string of vengeful acts.

Had Carnegie divulged the contents of the letter, the secretary's expression would have likely turned to outright astonishment. As it was, Bridge left Carnegie and made his way down Fifth Avenue from the awe-inspiring, sixty-four-room mansion across from Central Park at 91st Street to an even more imposing structure some twenty blocks south.

It was Bridge's good fortune that Carnegie had selected him to be the bearer of this missive, proof positive that he had managed his way back into Carnegie's good graces. For it was true that Bridge had authored his own acts of treason against Carnegie. In the early 1900s, while he was working on a revision of Triumphant Democracy that would have brought him a renewed flood of royalties, Bridge got word that Carnegie, still stinging from a series of rebukes from labor, would not permit a reissue of the book.

As a result, Bridge did the unthinkable: with information fed to him by Frick and others on the outs with Carnegie, he went to work on a book titled The Inside History of the Carnegie Steel Company, an account that reassessed any number of myths concerning Carnegie, including his role in one of the most violent labor strikes in United States history, 1892's infamous Battle of Homestead, where many were killed and injured on both sides. It was an event that had long dogged the thin-skinned Carnegie.

Bridge was fortunate, however; time and circumstance had changed Carnegie's perspective, not only upon the actions of others, but upon a number of his own as well. By most accounts, the last years of Andrew Carnegie were marked by great swings in the mood of “the world's richest man.” Carnegie, who acquired that sobriquet in 1901, when he sold his Pennsylvania steel empire to rival J. P. Morgan for the then-unimaginable sum of $480 million, had spent many of the intervening years giving away his fortune.

In addition to the funding of some 2,800 public libraries across the United States and as far away as Fiji and New Zealand, he had endowed the Carnegie Institute of Technology in his adopted hometown of Pittsburgh, Pennsylvania, the Carnegie Research Institution in Washington, D.C., and the Carnegie Educational Foundation in New York City, as well as the Endowment for International Peace. This last endowment was, in the final decade of his life, the cornerstone of his attempts to sway the nations of the world from their fixation upon war as a solution to political problems.

Carnegie's efforts to secure world peace would cost nearly $25 million ($5.5 billion today), but that was a pittance compared to all his giving. According to Carnegie biographer Peter Krass, Carnegie was fond of turning to an assistant during his later years to ask, "How much did you say I had given away, Poynton?" To which the answer was an inevitable "$324,657,399." To this day he is often credited with having established the precedent of corporate philanthropy; as one commentator observed, when Bill Gates makes a gift of some of his hard-earned millions, it is probably the ghost of Andrew Carnegie that guides his outstretched hand.

And yet Carnegie, for all his largesse, remained a troubled man. In 1914, speaking at the anniversary celebration of one of the libraries he had founded in western Pennsylvania, the white-bearded, slightly built benefactor, bearing an odd resemblance to Edmund Gwenn's Santa Claus in Miracle on 34th Street, said, "I'm willing to put this library and institution against any other form of benevolence. . . . And all's well since it is growing better and when I go for a trial for the things done on earth, I think I'll get a verdict of 'not guilty' through my efforts to make the earth a little better than I found it."

Beneath his self-confidence and optimism, the defensive undertone was clear: speaking scant miles from the site of that bloody Battle of Homestead, where steelworkers still lived in bleak houses and lacked the power to organize in any meaningful way, Carnegie knew full well that many a man in Homestead would dispute his claim that "all was well and growing better."

And in the five years since 1914, little had changed in the mill towns of Pittsburgh. A massive, nationwide strike to protest wages and working conditions in the steel industry loomed in late 1919, and Homestead still stood as the symbol of labor's difficult struggle. How much guilt Carnegie truly harbored is a secret he would carry to his grave, but the fact that he had sent an eleventh-hour communiqué to the man to whom he'd entrusted the defense of the Homestead plant on the fateful night of July 5, 1892, spoke volumes.

By the time Bridge arrived at the Frick mansion, a modern-day palace that its owner had vowed would make Carnegie's place look like a hovel, Bridge would have been beside himself, not only wondering as to the contents of the message he carried, but fearing the response of the man to whom it was addressed.

Though Frick, like Carnegie, stood at only five feet three inches (at a time when the average man was five feet seven), and was white-bearded by now as well, he would never be mistaken for Santa Claus. Photographs of the era reveal his features as handsome, but Frick's countenance was intimidating, and that had been no hindrance in his dealings with business rivals and union organizers. “You see that his head is there, placed on that body, for his triumph and your defeat,” one of his contemporaries observed. Thus, while Carnegie had gone to great pains to portray himself as a benevolent friend to his workers, he had delegated the job of holding the line on wages and other demands to Frick—a Patton to Carnegie's FDR, as it were.

Bridge knew Frick's legendary toughness well—this was one executive as willing to use his fists as his voice to deal with an enemy or a rival—and he could have been forgiven his apprehension as Frick tore open the envelope and scanned its contents.

Frick glanced up at Bridge accusingly, as if the messenger knew full well what was in the letter. "So Carnegie wants to meet me, does he?"

Bridge could only stare back, dumbfounded.

But a meeting was precisely what Carnegie had called for. In his careful script, Carnegie had reasoned that both he and Frick were growing old, and that past grievances were beneath their dignity. In truth, they were first among equals. Surely it was time to meet and patch up the wounds they had inflicted upon each other. Time to make amends and prepare to meet their Maker.

The words might have touched a chord in almost any other man, but Henry Clay Frick, still the ranking board member of U.S. Steel, showed no sign of gratitude or relief.

By this time Bridge might have been edging for the door. Frick's ire was, after all, legendary. He'd gone toe-to-toe with strikers, assassins, and even Carnegie himself, and had rarely met a grudge he could not hold. Long before Frick had constructed the mansion that would dwarf Carnegie's “Highlands” up the street, he had gone out of his way to purchase a tract of land in downtown Pittsburgh, then built a skyscraper tall enough to cast Carnegie's own office building next door in perpetual shadow.

"Yes, you can tell Carnegie I'll meet him," Frick said finally, wadding the letter and tossing it back at Bridge. "Tell him I'll see him in Hell, where we both are going." 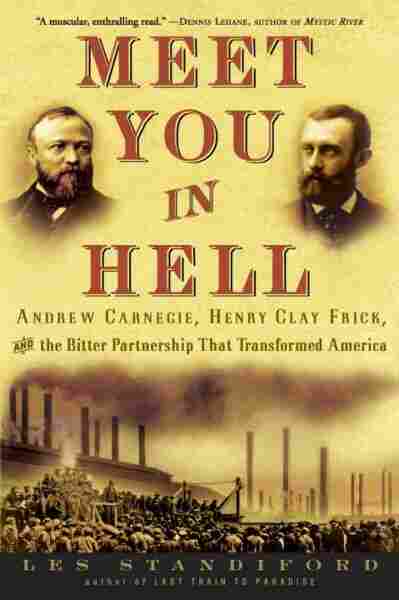 Meet You In Hell