Accessibility links
George Weller, Reporting from Nagasaki Journalist George Weller was in Nagasaki shortly after the Japanese city was hit by an atomic bomb in 1945. He wrote newspaper stories on what he saw, but military censors prevented their publication. The writer's son recently found carbon copies of the originals. 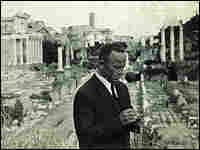 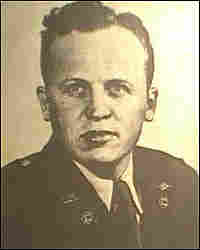 This photo of George Weller graced the cover of his 1944 book 'Overseas Bases,' a year before he entered Nagasaki. Courtesy Anthony Weller hide caption

George Weller was the first Allied journalist to reach Nagasaki after it was struck by an American atomic bomb at the end of World War II. But his stories for the Chicago Daily News never made it to print, because they were censored by the U.S. military.

Weller's son, novelist Anthony Weller, recently found carbon copies of his father's articles and released them in anticipation of the 60th anniversary of the atomic bombing. Among other things, they detail the medical puzzlement that greeted post-bombing deaths from radiation poisioning.

"The atomic bomb's peculiar disease, uncured because it is untreated, and untreated because it is not diagnosed, is still snatching away lives here," Weller wrote on Sept. 9, 1945, slightly more than four weeks after the bomb fell. "Men, women and children with no outward marks of injury are dying daily in hospitals, some after having walked around three or four weeks thinking they have escaped.... But they are dead; dead of the atomic bomb. And nobody knows why."

U.S. authorities had used propaganda to spread the notion that there was no danger from radiation, Anthony Weller says, and at first his father tended to agree. His son says the dispatches show how his father came to realize the situation was far more complex:

"There's a kind of arc in my father's dispatches that goes from the initial sense of 'this is an extremely precise bomb' to 'what on Earth is going on here.'"

George Weller went on to complete a remarkable career as a foreign correspondent that included a Pulitzer Prize in 1943. He died at age 95 in 2002.