Accessibility links
'Rize': Dancing Above L.A.'s Mean Streets The new documentary film tells the story of a street dance phenomenon from the rough streets of South Los Angeles -- krumping. For the dancers, it's a moment to rise above the crime and drugs that often plague their South-Central Los Angeles neighborhood. 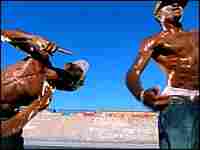 Krumpers glisten with sweat in a scene from the documentary Rize. Lions Gate Entertainment hide caption 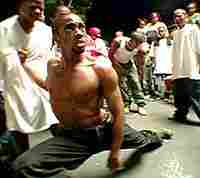 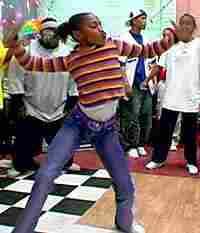 The next generation? A young clown krumper struts her stuff at a youth party. Lions Gate Entertainment hide caption

The new documentary film Rize tells the story of a street dance phenomenon from the rough streets of South Los Angeles -- krumping.

The hyperkinetic dance evolved as an escape from the violence the dancers face every day. Krumping is often described as "extreme" hip-hop dancing -- frenetic arm flailing and syncopated pelvic thrusts set to a hardcore beat.

The dancers are just as colorful as the krumping. Some dress as hip-hop clowns or paint their faces like tribal warriors, and take on names like Dragon, Lil' Mama, Lil' C, Tight Eyez and Miss Prissy.

Tight Eyez -- aka 20-year-old Ceasare Willis -- says krumping goes beyond the breakdancing of an earlier generation. "Krumping is like the punk rock of hip hop," he says. "It's like... hard core aggressive.'' Others have compared it to the cathartic release the devout find at church.

The documentary -- produced and directed by acclaimed photographer David LaChapelle -- intercuts scenes of krumpers "battling" each other with footage of dancers in Africa. Willis says similarities between the cultures were a revelation.

"I had no idea that the Africans did that for ceremonial purposes," he says. "It looked like they were getting krumped -- it was in the bloodline."

The word "krump" evolved from the lyrics of a song from the 1990s, but the young dancers have given it another meaning: "Kingdom Radically Uplifting Mighty Praise." The film traces the origins of krumping to 1992 and a man named Thomas Johnson, who goes by the name of Tommy the Clown and dances in full clown regalia.

"Before I was a party clown, I was in jail," Johnson says. "I was in the drug life... and I got out, changed my life, got into church -- and from then on, I became Tommy the Clown and moved forward."

Krumping may be a way out of the violence and drug abuse that often surrounds the dancers, but the danger is always present. The film is dedicated to 15-year-old krumper Quinesha Dunford -- she and a friend were gunned down in a drive-by shooting, in the middle of the day, while walking to the corner store.