Accessibility links
Gazpacho: Authentic Any Way You Like It Cool and light and a breeze to make, gazpacho is the answer for summertime supper. Food writer Bryan Miller has a two-step recipe, with lots of variations to make it your own. 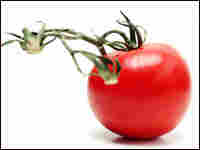 Bryan Miller is the author of 10 books about food and wine and a former restaurant critic for the New York Times. He lives in New York City.

When I was a student in Spain some 20 years ago, I must have broken a national record -- OK, maybe a town record -- for consumption of gazpacho. I lived in the historic city of Salamanca, which is perched high on the Castilian plains, where summer is wiltingly hot.

A traditional Spanish lunch of a slab of spit-roasted pig or a thick steak was out of the question. Instead, like a worker in a citrus or olive grove, I was drawn to gazpacho. In all of its variations, gazpacho (along with some fresh bread and a glass of Rioja wine) makes a light and nutritious repast, a perfect summer meal.

Gazpacho is often referred to as "salad soup," a zesty amalgam of garlic, tomatoes, cucumbers and more. One story has it that its name comes from the Hebrew term gazaz, which means to break into pieces. Another theory has the name originating in pre-Roman Iberia, derived from the word caspa or fragments.

One way or the other, gazpacho, which is popular in many regions of Spain, has seen more adaptations than a Dickens novel. It is generally agreed that the dish originated in the southeastern province of Andalusia, in the city of Cordoba, during the Middle Ages when Spain was part of the Islamic world. That rather austere original recipe called for only bread, garlic, oil and water. (All the chefs must have been off at war.)

Tomatoes became part of the mix some time after the Spanish explorers brought them back to Europe from Mexico -- not immediately, however, for Spaniards for years believed that tomatoes could be poisonous.

In the era BC (before Cuisinart), making gazpacho was laborious. Stale bread along with various vegetables were placed in a mortar and then worked into a paste. The olive oil and vinegar were added later. Today, it takes seconds to whip up in a food processor.

A recipe for gazpacho is something like directions to a small Castilian town, more a general pointer than a specific guidepost. When it comes to gazpacho these days, anything that tastes great is "authentic." Work with what's in your refrigerator.

Several years ago on a visit to Malaga on the Costa del Sol, I was served a gazpacho that contained fresh grapes. They were not part of the blend but rather a garnish, sliced lengthwise and arranged on the surface. They added a pleasant sweetness. Some recipes call for ground almonds, while others are thickened with homemade mayonnaise. (Commercial mayonnaise, while good for many dishes, does not work particularly well here.)

Here is one of my favorite gazpacho recipes -- a two-step enterprise you can make in no time. It's an ideal meal for entertaining, particularly since it improves when refrigerated overnight. A list of variations below will help you put a personal stamp on this summer classic.

2. Combine all ingredients except 2 tablespoons of the herb in the bowl of a food processor. Pulse to a coarse texture. Transfer to a bowl and taste. Sprinkle remaining coriander over each serving. Serve with crusty bread.

Cubes of avocado, added before serving.

2 tablespoons of sherry, added before serving.

For a slight smoky flavor, char the sweet red pepper over a gas flame. Remove blackened skin and add before pureeing.

2 tablespoons olive oil, or as needed

In a medium skillet over low setting, heat the olive oil. Add the crushed garlic and cook for a minute, stirring. Stir in the bread, coating with the garlic oil. Toss the croutons until golden and crunchy. Sprinkle over servings of soup.