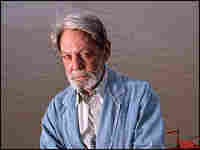 Listen to past NPR interviews with the noted historian:

Foote Reflects on the Civil War on 'Fresh Air' July 27, 1994
Foote on His Lifelong Friendship with Novelist Walker Percy Dec. 14, 1996
Foote on Spotlighting the Uniqueness of America's Geographic Regions Sept. 18, 1999

Novelist and historian Shelby Foote died Monday night. He was 88. The native Mississippian gained a sort of celebrity when he lent his gravelly voice to Ken Burns' PBS documentary series The Civil War.

Foote spent 20 years working on his three-volume, 3,000-page history of the Civil War. It was little-noticed by the general public before the PBS series featured Foote's genial storytelling style. In 1999, the Modern Library ranked The Civil War: A Narrative as No. 15 on its list of the 100 best English-language works of the 20th century.

Among the writer's other works were Stars in Their Courses, about the Gettysburg campaign, and the novels Shiloh and Follow Me Down. Foote, who moved to Memphis, Tenn., in 1953, is survived by his wife, Gwyn, daughter Margaret, and son, Huger Lee.