Accessibility links
Sen. Thune Wrestles with the Politics of Base Closure South Dakota's Republican Sen. John Thune has been in office only six months and he's already learned some hard political lessons from the base closure process. He was surprised when the Pentagon announced it planned to close his state's Ellsworth Air Force Base. Now he fighting to save what is his state's second-largest employer.

Listen
Sen. Thune Wrestles with the Politics of Base Closure 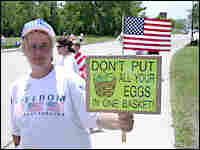 People lined the streets of Rapid City, S.D., as members of the Base Closure and Realignment Commission drove through town. Locals showed their support for Ellsworth Air Force Base by displaying signs questioning the planned closure. Ben Bergman, NPR hide caption

Sen. John Thune on the connection between Ellsworth AFB and his stance on John Bolton.

Former Sen. Tom Daschle on the relationship between political influence and base closings.

McKie Ford Sales Manager Joe Hockhausen on the chances that either Thune or Daschle could have saved Ellsworth.

He ran his winning campaign against former Democratic Sen. Tom Daschle, in part, on the promise that he had the ear of President Bush and would be well placed to keep Ellsworth Air Force Base open.

Now Thune is in office and the Pentagon has slated Ellsworth, South Dakota's second-largest employer, for closure.

The base is home to part of the Air Force's B-1 bomber fleet. Under the planned closure, the bombers would be shifted to a base in Texas, the president's home state.

This has created some tension between the White House and the senator. Although it's not clear there is a link, Thune has decided to vote against confirming John Bolton, the president's nominee to be America's next United Nations ambassador.

People in South Dakota are not concerned as much with the politics of the situation as they are with the loss of 10,000 airmen from the Black Hills area. That represents nearly 10 percent of the area's population.

Locals turned out in force to greet and lobby the government's Base Closure and Realignment Commission when it recently visited Rapid City to review the planned closure.

Thune, who was there too, said he and his staff are working 24-hours a day to keep Ellsworth open.