Accessibility links
'Stuff Happens': The Iraq War as History Play The dark comedy by David Hare chronicles the tangle of diplomatic maneuvers leading to the war. It hints that President Bush and top advisers intended to invade Iraq even before the Sept. 11 attacks. 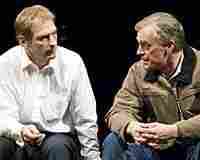 2002: Blair gets a promise from Bush that plans for an invasion of Iraq aren't 'on the table' 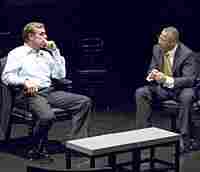 2003: Colin Powell warns Condoleezza Rice and President Bush about the consequences of going to war

Stuff Happens, the controversial British play about the lead-up to the Iraq war, is finally enjoying its American debut in Los Angeles. The David Hare play chronicles the tangled diplomatic maneuvers leading up to the war -- and hints broadly that President Bush and his top advisers intended to invade Iraq even before the Sept. 11 attacks.

The play takes its title from a remark made by Secretary of Defense Donald Rumsfeld when he was asked to comment on the looting in Iraq following the fall of Baghdad. "Stuff happens," he told reporters.

All the main players are here -- Bush, Rumsfeld, Dick Cheney, British Prime Minister Tony Blair, Condoleezza Rice, Colin Powell -- and in many cases, the actual words those real-life leaders said in public statements are part of the dialogue.

The scenes that take place behind closed doors, however, are the work of Hare's imagination. Hare says he spoke confidentially to dozens of people involved in the events he portrays, and some scenes echo the recently uncovered "Downing Street Memo," which suggests the Bush administration decided to invade Iraq long before it publicly acknowledged any decision had been made, and even while efforts were being made at the United Nations to preclude a war.

But Hare says Stuff Happens isn't some kind of live-action documentary. He calls it a history play.

"It's about power. And there's one man who understands power, and that's George Bush," Hare says. "I describe it as a play about how a supposedly stupid man, George W. Bush, gets everything he wants -- and a supposedly clever man, Tony Blair, ends up with nothing he wants."