Accessibility links
Foreign Adoption of African-American Babies Grows Americans adopted more than 22,000 foreign-born children last year. But a number of African-American and mixed-raced babies born in the United States are being adopted by foreigners living abroad. 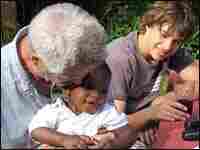 Americans adopted more than 22,000 foreign-born children last year. But the trend is reversed for some African-American and mixed-raced babies born in the United States. Those children are leaving the country, adopted by foreigners living abroad.

Among those adopting U.S.-born African-American babies are Earl Stroud and his partner, Allison Darke, of Ottawa, Canada. Both are Caucasian. They adopted their son Ethan, who is black, shortly after he was born in Chicago.

No one has a full count on the number of black babies from America being adopted by foreigners, but Tom Atwood of the National Council for Adoption calls it a relatively rare phenomenon. "Maybe we're talking about a couple hundred or so children a year," he says. "[That's] small when compared to the 128,000 adopted by Americans each year."