Accessibility links
Edinburgh Rally, Live 8 Concerts Target Poverty Saturday's Make Poverty History rally is under way in Edinburgh, Scotland. And a linked series of Live 8 concerts are held in nine cities across the world. The efforts are aimed at encouraging G8 leaders to take action to end poverty in Africa.

Saturday's Make Poverty History rally is under way in Edinburgh, Scotland. And a linked series of Live 8 concerts are held in nine cities across the world. The efforts are aimed at encouraging G8 leaders to take action to end poverty in Africa. 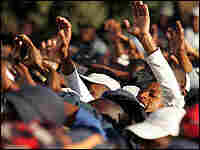 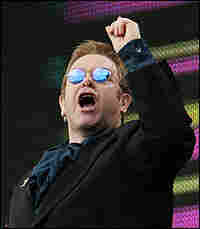 And mass demonstrations and concerts are in progress at this hour in several cities around the world. Participants are urging leaders of the G8 group of nations, who will be meeting in Scotland on Wednesday, to alleviate poverty, especially in Africa. Scheduled events include a march to Make Poverty History in Edinburgh and Live 8 concerts in 10 cities around the world. NPR's Anthony Kuhn joins us from Edinburgh.

Anthony, thanks for being with us.

SIMON: And I hear tens of thousands of people behind you, as we so often do when we chat. Tell us what these are doing.

KUHN: Well, the plan here in Edinburgh this morning is to march from the Meadows where we are now--it's a big park in Edinburgh--and form a human chain around Edinburgh Castle in the center of the city. The events are gonna go on all day--music and speakers and tents and exhibitions--and Live 8 concerts have already started in several cities. Tokyo was the first. And those are, you know, being billed as the largest popular music concerts ever with big names, including a reunion of Pink Floyd after many years. In Philadelphia there's gonna be a focus on hip hop. So we see about--we're seeing estimates of about a hundred thousand people or more, which is much less than what Sir Bob Geldof called for--a million. But for Edinburgh, which is not that big a city, it's still a lot of people.

SIMON: And what are they saying? I saw several people interviewed who said, `Look, we're not protesters. We're asking for something.'

KUHN: That's correct. It's really a truly amazing array of demands, a full spectrum of groups. But the focus, of course, is the same as the G8, which is poverty in Africa and global warming. Now there are a couple of big umbrella groups here, including Make Poverty History, and what they're asking for is to have aid to Africa doubled to relieve debt, to cancel debt to African nations, and to bring trade justice and reforms to trade regimes, eliminate subsidies and other unfair practices. But, you know, there's also a very strong environmental contingent here and an anti-war bent to a lot of the activism.

KUHN: Well, the people who are putting this on and participating know that they are not necessarily going to be the decisive factor. The aim is, as we say, to raise awareness, and that is certainly being done. There's no question about it. And, you know, over the years some of the things that people have pushed for--for example, canceling debt--has happened. But it's not all due to the protesters, and there's just a danger that expectations will be raised higher than can be met.

KUHN: Well, yes, there are blimps in the sky and people say there's an eye on anarchists, but there are lots of kids here and the march so far has been very peaceful.

SIMON: OK. NPR's Anthony Kuhn speaking with us from Edinburgh in advance of the G8 conference.

And it's now 18 minutes past the hour.