Accessibility links
Dad, Daughter Write the Book on BBQ We honor the smoke and sweat that come with the summer rite of grilling over open flame, be it patio, backyard or favorite barehands rib joint. Jennifer Ludden chats with Mike Mills and Amy Mills Tunnicliffe, who teamed for a book on the subject: Peace Love and Barbecue. 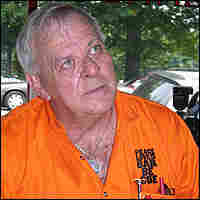 Mike Mills co-wrote his book on barbecue after years on the competitive circuit and decades of experience with his subject. Kate Davidson, NPR hide caption 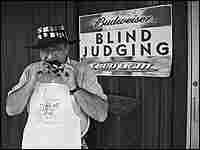 Barbecue judge Hap Zook samples a rib during a competition in one of many candid photos contained in the book. hide caption 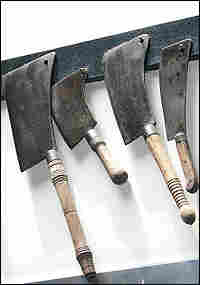 'Peace Love and Barbecue' is featured in NPR's Summer Reading section, with an additional recipe:

Coriander (will kill a maggot, but some people do use it)

Cloves (will gag a maggot, but some people do use it)

Dill (use for seafood, not barbecue)

Lemon pepper or lemon zest (Some people like it. Mike uses it only in rubs for fish and vegetables.)

Rosemary (only for poultry and seafood)

The July 4 weekend is traditionally a time when the grills are hot and yards and patios are full of amateur chefs testing their grilling prowess. To honor the smoke and sweat that come along with it, Jennifer Ludden chats with the authors of a new book, Peace, Love and Barbecue. Mike Mills says the family project, written with daughter Amy Mills Tunnicliffe, has its roots with his own father, Leon Mills, a traveling salesman who was obsessed with the art of BBQ, tending a homemade pit in the family's backyard.

Mike Mills owns an interest in nearly a dozen barbecue restaurants in Southern Illinois, Las Vegas and New York. He has a variety of cooking trophies from national and international festivals. The book further explores the secrets of cooking over open flame, and celebrates great barbecue joints around the nation. Mills and Tunnicliffe say they traveled through 15 states and covered more than 100,000 miles to visit "shrines, shacks, joints and right-respectable restaurants."

Rocklands, a small chain in Washington, D.C., and surrounding suburbs, offered the backdrop for a conversation on Mills' favorite subject.

Excerpts and Recipes from 'Peace Love and Barbecue'

Here's an all-purpose dry rub that you can use as the basis for experimentation. To start experimenting, choose from the "Do Use" list of ingredients (see sidebar). Start by adding just 1/4 teaspoon of a particular ingredient. Taste, decide if you'd like to have more of that flavor, and adjust the amount as necessary. You'll notice that this particular recipe has no sugar, but you can add some if you like.

Mix all ingredients and store in a tightly covered container.

The Gospel on Sauce

When I bought 17th Street Bar & Grill in 1985, Mama Faye (Mike Mills' mother) was 82 years old and in excellent health. For several years, she made gallons of our family’s barbecue sauce each week, but once the place got going, the amount I needed for the restaurant and for competition quickly got to be overwhelming. I had to cook hundreds of batches myself.

To Mama Faye's dismay, I did alter our recipe ever so slightly. I only added some apple juice and a few different spices, but she never let me forget it. "This isn't the original sauce," she'd tell anyone who'd listen. "Mike veered off the recipe."

She was awfully proud, however, when the sauce won the Grand Sauce Award at the Jack Daniel's World Championship International Barbecue Cook-Off in 1992.

This award-winning sauce (from Mills' days as co-captain of the Apple City Barbecue team) enhances just about any barbecue. Some barbecue sauce is very thick and just sits on top of the meat. This sauce is smooth and on the thin side, and it seeps down into the meat.

Combine the ketchup, rice vinegar, apple juice or cider, cider vinegar, brown sugar, soy sauce or Worcestershire sauce, mustard, garlic powder, white pepper, cayenne, and bacon bits in a large saucepan. Bring to a boil over medium-high heat. Stir in the apple, onion, and bell pepper. Reduce the heat and simmer, uncovered, 10 to 15 minutes or until it thickens slightly. Stir it often. Allow to cool, then pour into sterilized glass bottles. A glass jar that used to contain mayonnaise or juice works real well. Refrigerate for up to 2 weeks.

VARIATION: To make this sauce a little hotter, add more cayenne pepper to taste, approximately another 1/4 to 1/2 teaspoon.

Be careful; a little cayenne goes a long way.

My friend and colleague Don McLemore and his son-in-law Chris Lilly run Big Bob Gibson Bar-B-Q in Decatur, Alabama. Don's granddaddy started Big Bob's in 1925, and he's famous for having invented the white barbecue sauce they use on chicken and turkey. Sadly, the original recipe isn't much of a secret anymore. His grandfather shared the recipe freely, and several family members and former employees left and started up their own establishments using that recipe. Nobody moved too far away. To this day, white sauce is indigenous to Northern Alabama; I've never seen it anywhere else. Don and Chris graciously share the family's secret white sauce recipe here.

Combine all the ingredients in a large bowl and mix thoroughly. Place in an airtight container or bottle and refrigerate until you’re ready to use. Keeps up to 4 days.