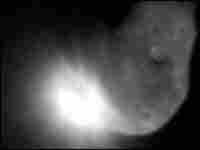 A wealth of data was produced by the collision, which researchers say they will be interpreting for weeks and months. The last image of the comet from the Deep Impact probe revealed a pocked, rocky surface of the comet's elongated core, shaped somewhat like a potato.

Despite the hopes of stargazers in the United States, the outer-space fireworks were hard to see from Earth without a big telescope.